A Guide to Creating LGBTQ-Inclusive Forms

Inclusive forms are an important part of LGBTQ-affirming organizational culture. This guide will help you create more inclusive forms and applications.

In general, a good question to ask yourself when creating/updating forms is “do I actually need this information?” Some questions have become a habit to include on paperwork when the information is actually irrelevant! Also think about which questions are required and which are optional.

If you determine that you do need to know a person’s gender, best practice is to have an open field for people to write in.

This form from OneTable uses an open “Gender identity” field.

Another good option is to have multiple checkboxes with the instruction, “check all that apply,” which includes a self-describe option.

Do not offer only two options for gender. And remember, the terms male and female describe sex, not gender. (Need a reminder on these terms? Check out Keshet’s extensive terminology primer.)

Avoid the term “other.” (i.e. man/woman/other) This quite literally others people with nonbinary gender identities! If your data system only allows three gender options on forms, try woman/man/gender not listed. See “Utility” section below for tips on working within database restrictions. 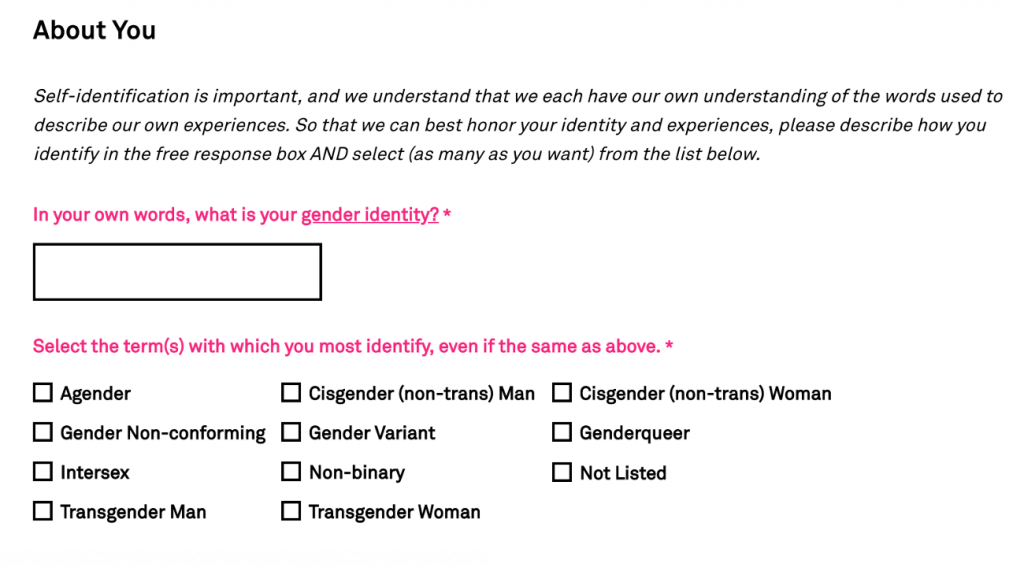 This form from Keshet shows multiple checkboxes and an open field for people to describe their gender identity.

While people of all genders and sexual orientations can be legally married, many people choose not to. Use neutral language like spouse or partner rather than husband/wife.

When asking about children’s parents/guardians, use neutral language rather than “mother/father.” Use Parent/guardian 1 and Parent/guardian 2 instead. And remember not all children live with two adults, so make sure information about a second parent/guardian is optional.

Be sure to use neutral language like child, youth, young person, etc. rather than son/daughter.

Be explicit about the information you’re seeking. Some people have a chosen name or a preferred name that is different from their legal name or the name on IDs and birth certificates. If you need to know a legal name, frame it as such as well as including a question about a chosen name. Always call people by their chosen names!

This form from Gender Spectrum shows open fields to indicate a child’s preferred name as well as the name on their birth certificate.

Pronouns are the words used to describe a person in the third person, so are often helpful to collect when asking other demographic information. (You can read more about why pronouns are important in Keshet’s pronoun resource.) You can ask pronouns by providing checkboxes with multiple options, as well as a write-in option.

This form from Keshet shows a selection of pronouns and an open field for people to offer write-in their own.

You can also include a line explaining what pronouns are and why you are asking for this information. For example: “Please share your pronouns. Pronouns are the part of speech used to refer to someone in the third person. We want to know how to respectfully refer to you!” 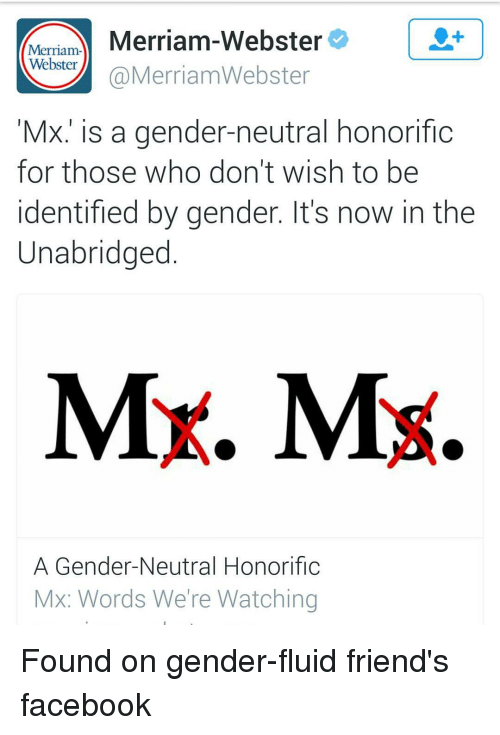 Mx. is a gender-neutral honorific for those who don’t wish to be identified by gender. It’s now in the Unabridged.

Make sure to include neutral title options like Mx. (pronounced “mix”) which is a neutral alternative to Ms. and Mr.

If your systems do not allow you to have multiple checkboxes or a write-in for demographics questions, consider addressing this on your forms. For example, if your system only allows you three options for gender, you could include a short blurb with the question that says “we recognize that there are many more gender identities than can be listed here. Currently, our database system only provides the options of ‘man,’ ‘woman,’ and ‘nonbinary/other.’ Please select the category that most closely aligns with your gender identity. If you have additional information to share, contact [email protected]”

If you are affiliated with a government organization that has forms you cannot change, consider creating a supplementary form that asks for chosen names, gender identity, pronouns, and any other important information that the standard forms don’t collect.

Some government forms and paperwork require information that may be considered highly private for some people. Things like legal names and gender markers on their birth certificates can differ from one’s chosen name and actual gender identity. If you need to know this information, don’t guess. In hiring paperwork, you can include a question about legal name and gender on birth certificate or state ID. It’s a good idea to include an explanation that this information will be kept confidential and is only being used for legal purposes.