What’s in a Pronoun?: Resources and Activities on Third-Person, Gender- Neutral Pronouns

This resource includes a guide to pronouns and gender-neutral pronouns, with an emphasis on addressing questions about using “they” as a singular pronoun. The fill-in-the-blank activity gives people a chance to experience how gender-neutral pronouns work in action. The speed chevruta activity provides an opportunity to practice pronouns as part of introductions and elicits empathy through the sharing of experiences of isolation and/or discrimination.

What’s in a Pronoun?: Resources and Activities on Third-Person, Gender- Neutral Pronouns

Pronouns are words used to talk about a person instead of using that person’s name. For example, instead of saying, “Moishe’s challah is amazing because Moishe uses Moishe’s own special recipe,” we could use pronouns instead. If Moishe uses he/him/his pronouns, this sentence could be: “Moishe’s challah is amazing because he uses his own special recipe.” Many people use the pronoun sets he/him/his or she/her/hers. Other people may use the neutral pronoun set they/them/theirs or other neutral pronoun sets, such as ze/hir/hirs.

WHAT DO YOU MEAN BY “NEUTRAL”?

The pronouns he/him/his and she/her/hers indicate gender: man/woman or boy/girl. Often, however, we don’t know the gender of the person that we are talking about. For example, if you find a wallet on the ground, you might say, “I should find the owner of this wallet. They must be looking for it.” In this case, the person we’re talking about could be of any gender, so the pronoun they is used. You are probably already familiar with using neutral pronouns. However, they/them/theirs pronouns are not just used to talk about a hypothetical or unknown person. Some people use they/them/theirs in the same way others use she/her/hers or he/him/his. For example, if Ari uses they/them/theirs pronouns, we might say, “Ari hosted an amazing Shabbat dinner last night! They made all their favorite dishes and even made the chocolate babka themself.” Many people who are genderqueer, nonbinary, agender, or trans use they/them/theirs pronouns.

Find out more info on neutral pronouns at https://www.mypronouns.org/they-them

HOW AM I SUPPOSED TO KNOW WHAT PRONOUNS PEOPLE USE?

You’re not a mind-reader, so you really can’t know what pronouns someone uses unless you ask. A wonderful way to do this is to share your pronouns first, which in turn indicates that you’re open to hearing others’ pronouns. It’s an easy technique to incorporate in meetings or other gatherings where people introduce themselves. You can say, “My name is Rachel, and I use she/her/hers pronouns.” It only takes a second and is an important step toward the inclusion of people of all genders in the space. It also combats gender stereotypes generally by breaking down the assumption that someone must look a particular way in order to be read as a certain gender. Also, make sure you check in with the person about who knows these pronouns as we wouldn’t want to unintentionally out somebody.

WHY IS THIS IMPORTANT?

On the most basic level, using people’s correct pronouns is about kavod (respect). In the same way we ask people’s names so we can refer to them correctly, using people’s pronouns is about honoring them as a person. As Jews, we are tasked with loving our neighbors and strangers, as we were once strangers in Egypt. In a work or learning environment, people can’t be productive and fully present if they feel ignored, invisible, and disrespected. Sharing, asking, and using correct pronouns helps maintain shalom bayit (peace in the home) by contributing to an environment where everyone can be comfortable and safe.

WHAT IF I MESS UP AND USE THE WRONG PRONOUN FOR SOMEONE?

For many people, using they/them/theirs pronouns is a new concept, and mistakes happen. When we make  a mistake, we can remember our duty of tshuva (repentance). Unlike Yom Kippur, however, your apology doesn’t have to be hours-long! In fact, a short apology is better because it doesn’t dwell on the mistake. When you apologize for getting a pronoun wrong, try to avoid making the apology about your own discomfort.

Statements like, “I’m sorry, but this is just so hard for me,” make the conversation about you, as opposed to the person who was [probably unintentionally] hurt, misgendered and/or misunderstood. Instead, try: “As he said—sorry, I mean, as they said—latkes are superior to hamentashen, and I agree with them.”

BUT ISN’T “THEY” PLURAL?

One of the most common pushbacks to using “they” as a gender-neutral pronoun for an individual is a question of grammar. Most of us learned that “they” is a plural pronoun for groups of people only. Therefore, it’s grammatically incorrect to use “they” for a single person. We can get stuck in this grammar vortex until we realize that using “they” as a singular pronoun has been happening for centuries in the English language!

Using the singular “they” or one of its other forms has long been used in literature as a way of referring to a single person. The practice dates as far back as the 16th Century (and maybe even longer) in some of the most revered works of English literature.

Going all the way back to the year 1400, Geoffrey Chaucer used “they” in The Canterbury Tales:

“And whoso fyndeth hym out of swich blame,
They wol come up […]”
Translation: “And whoever finds him out of such blame, they will come up…”

Shakespeare, whose effect on the English language can’t be overstated, used the singular “they” in multiple works:

There’s not a man I meet but doth salute me
As if I were their well-acquainted friend (Comedy of Errors, Act IV Scene 3) And every one to rest themselves betake (Rape of Lucrece)

One of the most renowned English novelists of all time, Jane Austen, employed “they,” “them,” and “their” throughout her works. An example, found in Mansfield Park:

The beloved American poet Emily Dickinson shows many uses of the singular “they” in this excerpt from a letter in 1181:

“Almost anyone under the circumstances would have doubted if [the letter] were theirs, or indeed if they were themselves.”

All this to say, there’s a history that we can look to in order to understand the use of “they” singular and see it isn’t anything new. The English language has been grappling with the confines of gender from the beginning.

It also must be said that language is constantly evolving, and English is a particularly malleable one (did you know that “you” was originally a plural pronoun?). “They” as a singular pronoun has caught on so widely that even elite dictionaries and style guides have recognized its usage and importance as a singular, gender-neutral pronoun.

Oxford Dictionaries and Merriam-Webster both include the singular usage and its longstanding usage in their definitions of “they.” Read more about their perspectives at https://en.oxforddictionaries.com/definition/they and https://www.merriam–webster.com/dictionary/they.

Along with dictionaries, grammar and style experts have also made their case for a singular “they.” It was the American Dialect Society’s 2015 Word of the Year: 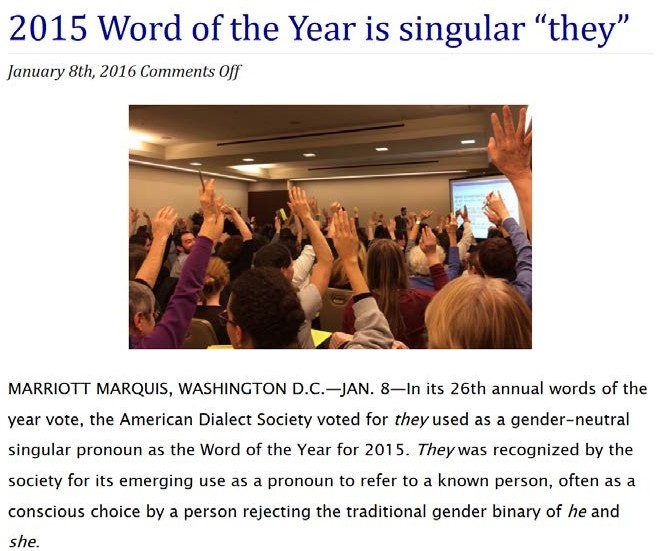 The most reputable and widely used style guides have also legitimized the singular “they,” including the Washington Post Style Guide, Associated Press Stylebook, and the Chicago Manual of Style. 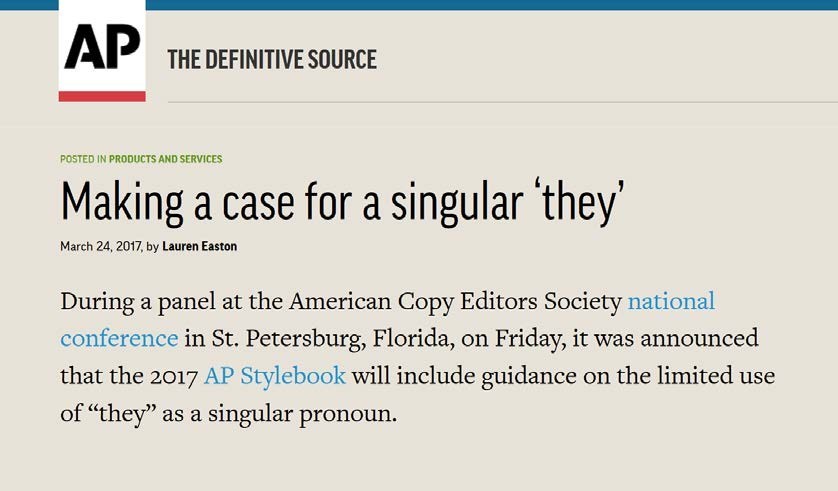 The Chicago Manual of Style, one of the most widely used, says, “A writer (or speaker) may also use they to refer to a specific, known person who does not identify with a gender-specific pronoun such as he or she… CMOS 17 will advise that ‘a person’s stated preference for a specific pronoun should be respected.’” This usage is still not widespread either in speech or in writing, but Chicago accepts it even in formal writing.

It’s a real challenge to reframe our understanding of one of the building blocks of communicating. Thankfully, there are plenty of sources explaining how grammar is already making the singular “they” work.

CAN’T PEOPLE COME UP WITH NEW PRONOUNS INSTEAD?

Yes, and in fact people have! Many sets of alternative gender-neutral singular pronouns have been developed. For some people, these new pronouns are empowering and authentically express how they relate to their gender. New pronouns can also help avoid the confusion that some people have around using “they” for a single person.

Here’s a chart of third-person pronouns with many options for referring to an individual. This isn’t an exhaustive list; there are more out there that people have developed. You may be wondering why there are so many options. Awareness about pronouns is still relatively new. People are figuring out what works best for them. It’s a huge challenge to make language usage inclusive, but people are working really hard to do so.

*Note: hir and zir and their variants are pronounced with a long e, like the word “here.”

The newness of some of these words may be a lot to take in and can feel overwhelming. What it really comes down to is listening to the person you’re talking with. They will tell you the best way to respect them, as we all deserve. It may be hard, and you’ll probably make mistakes. That’s okay. That’s how we learn.

Feeling uneasy about putting into use ‘They/They/Their(s)’ pronouns? No problem; we understand and have your back! Below is a Fill in the Blank activity for you to practice using these words in different scenarios. The answers follow. The first set is using the ‘They’ series in ways we do every day even though we may not be thinking about it.

Word Choices: They, Them, Their, Theirs, Themself (and grammatical variations such as ‘they’ve’ and ‘they’re’)

Pick the correct word from the Word Choices to complete the following sentences.

Goals: (1) to practice and normalize sharing and asking pronouns and (2) to build empathy based on personal experiences of isolation/discrimination

Setup: Two rows of chairs facing each other (with or without table between)

Framing: “For many of us, sharing our pronouns and asking others’ pronouns is a new convention. This activity will help us practice, as well as helping us reflect on our own experiences.”

Directions: Ask participants to find a partner they don’t know (or don’t know well) and sit across from them. The beginning of each round will start with both partners introducing themselves with name, pronouns, and role/institution. (Remind folks that they should do this at the beginning of each round, even if they know the person across from them, since we’re practicing using pronouns.) After the introductions, read aloud one of the following prompts (if possible, project prompt on presentation screen). Both partners should answer the question. After 2 minutes, yell “rotate” and have everyone move one chair to their right and repeat the process.

Debrief: Remind folks to just share from their experiences and not their partners’, since sometimes we are comfortable sharing a story with one person but not the entire room.

Closing: “Most people can relate to the feeling of being different or other at some point in their lives, but some people feel this otherness more than others. For transgender, gender non-conforming, and non-binary people, this is something they face every day.”