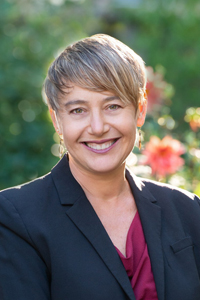 ldit Klein (she/her) is a national leader for social justice with more than 25 years of experience in the non­profit sector. Since 2001, she has served as the leader of Keshet, the national organization for LGBTQ equality in Jewish life. ldit built Keshet from a local organization with an annual budget of $42,000 to a national organization with an annual budget of nearly $4 million. Under her leadership, Keshet has supported tens of thousands of rabbis, educators, and other Jewish leaders to make LGBTQ equality a communal value and imperative. ldit also spearheaded the creation of leadership development programs for queer Jewish teens and mobilized Jewish communities to help defeat a proposed constitutional amendment to ban same-sex marriage and advance transgender rights in Massachusetts. In addition, she served as the Executive Producer of Keshet’s documentary film, “Hineini: Coming Out in a Jewish High School.”

Prior to leading Keshet, ldit worked in Jerusalem for Israeli-Palestinian peace and helped envision the Jerusalem Open House as a leader in the Israeli LGBTQ rights movement. A magna cum laude graduate of Yale University, ldit earned her Master’s in Education from the University of Massachusetts, Amherst, with a focus on social justice and anti-oppression education. She serves on the advisory board of the Safety Respect Equity Coalition and the leadership team of the Jewish Social Justice Roundtable to strengthen the national Jewish social justice movement. ldit was honored by the Jewish Women’s Archive with a Women Who Dared award as well as by Jewish Women International with a Women to Watch award, and selected for the Forward 50, a list of American Jews who have made enduring contributions to public life. She lives with her family in Boston.