Jewish resources for World AIDS day, which has been marked on December 1st each year since 1988. This is a day dedicated to raising awareness of the AIDS epidemic, and a day of mourning for those who we have lost. 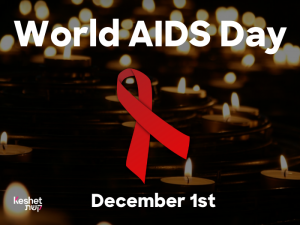 December 1st is World AIDS Day, a day dedicated to raising awareness about HIV/AIDS and mourning those we lost to the disease. It seems fitting that we mark this day in December, when the days are short, in honor of all those whose light was taken from this world too soon.

The Talmud teaches us that when we lose just one person, it is considered that the entire world has been destroyed. In the years since AIDS was first observed in the United States, we have seen the world destroyed over a million times.  A million souls gone – which of them would have cured cancer, painted a masterpiece, or solved any of the world’s seemingly intractable problems?

Today, we mourn our losses, and we recommit ourselves to fighting AIDS, fighting stigma and discrimination against those infected and affected, and ultimately, to finding a cure.

Remembering on World AIDS Day: Paul Cohen, President of Sha’ar Zahav and friend of Keshet, reflects on his congregation’s activism during the AIDS epidemic.

Telling My Story for World AIDS Day: “Stand with your congregation, and recite Kaddish for those we have lost to the AIDS epidemic, those who have no one standing for them.” James Miller, Executive Director of the LGBT Center of Raleigh.

Parashat Noach: Apres le Deluge: Moi: Michael Sarid sees echoes of Noah’s behavior after the flood among Holocaust survivors – and those who lived through the AIDS crisis.

United in Anger: A History of ACT-UP is a documentary about the birth and life of the AIDS activist movement featuring oral histories from its members, many of whom were Jewish.

Hold a World AIDS Day Shabbat with your synagogue.

Host a section of the AIDS Quilt with your Jewish community.