Speaking Out for LGBTQ+ Rights as a Jewish Teen

Learn how you can get involved as a teen dedicated to LGBTQ+ equality. 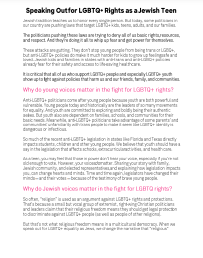 Jewish tradition teaches us to honor every single person. But today, some politicians in our country are pushing laws that target LGBTQ+ kids, teens, adults, and our families.

The politicians pushing these laws are trying to deny all of us basic rights, resources, and respect. And they’re doing it all to whip up fear and get power for themselves.

These attacks are gutting. They don’t stop young people from being trans or LGBQ+, but anti-LGBTQ+ policies do make it much harder for kids to grow up feeling safe and loved. Jewish kids and families in states with anti-trans and anti-LGBQ+ policies already fear for their safety and access to life-saving healthcare.

It is critical that all of us who support LGBTQ+ people and especially LGBTQ+ youth show up to fight against policies that harm us and our friends, family, and communities.

Why do young voices matter in the fight for LGBTQ+ rights?

Anti-LGBTQ+ politicians come after young people because youth are both powerful and vulnerable. Young people today and historically are the leaders of so many movements for equality. And youth are committed to exploring and boldly being their authentic selves. But youth also are dependent on families, schools, and communities for their basic needs. Meanwhile, anti-LGBTQ+ politicians take advantage of some parents’ and communities’ unfamiliarity with trans people to make it seem like LGBTQ+ identity is dangerous or infectious.

So much of the recent anti-LGBTQ+ legislation in states like Florida and Texas directly impacts students, children and other young people. We believe that youth should have a say in the legislation that affects schools, extracurricular activities, and health care.

As a teen, you may feel that those in power don’t hear your voice, especially if you’re not old enough to vote. However, your voices do matter. Sharing your story with family, Jewish community, and elected representatives, and explaining how legislation impacts you, can change hearts and minds. Time and time again, legislators have changed their minds – and their votes – because of the testimony of brave young people.

Why do Jewish voices matter in the fight for LGBTQ rights?

So often, “religion” is used as an argument against LGBTQ+ rights and protections. That’s because a small but vocal group of extremist, right-wing Christian politicians and leaders claim that their religious freedom means they should get legal protection to discriminate against LGBTQ+ people (as well as people of other religions).

But that’s not what religious freedom means in a multicultural democracy. When we speak out for LGBTQ+ equality as Jews, we change the narrative that “religious” means anti-LGBTQ+. We support LGBTQ+ rights not in spite of our religion, but because of it. We know the feeling of being treated as strangers simply because of who we are.  Our religious and ethical tradition teach us that it’s a mitzvah to work for LGBTQ+ equality!

How can you get involved?

There are so many ways you can make a difference right now in the fight for LGBTQ+ rights. Here are just a few ideas: