Keshet and URJ have written a letter to Congress, urging them to pass this bill.
Read the letter and learn about the 106 Jewish organizations that have signed on here. 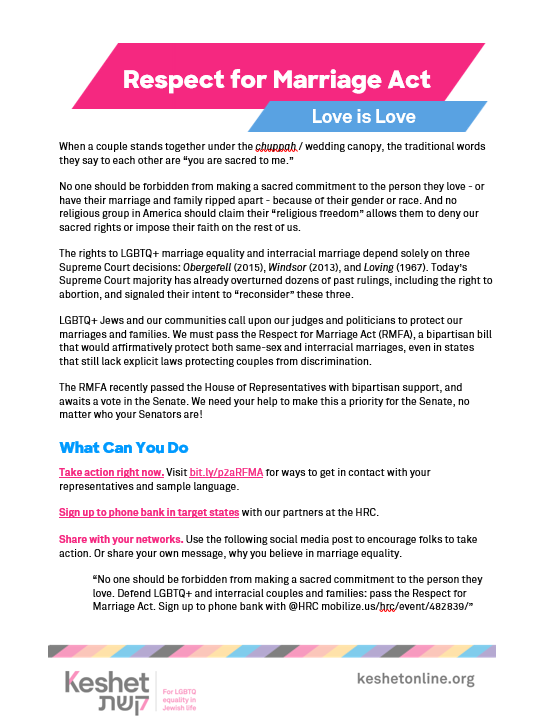 When a couple stands together under the chuppah / wedding canopy, the traditional words they say to each other are “you are sacred to me.”

No one should be forbidden from making a sacred commitment to the person they love – or have their marriage and family ripped apart – because of their gender or race. And no religious group in America should claim their “religious freedom” allows them to deny our sacred rights or impose their faith on the rest of us.

The rights to LGBTQ+ marriage equality and interracial marriage depend solely on three Supreme Court decisions: Obergefell (2015), Windsor (2013), and Loving (1967). Today’s Supreme Court majority has already overturned dozens of past rulings, including the right to abortion, and signaled their intent to “reconsider” these three.

LGBTQ+ Jews and our communities call upon our judges and politicians to protect our marriages and families. We must pass the Respect for Marriage Act (RMFA), a bipartisan bill that would affirmatively protect both same-sex and interracial marriages, even in states that still lack explicit laws protecting couples from discrimination.

The RMFA recently passed the House of Representatives with bipartisan support, and awaits a vote in the Senate. We need your help to make this a priority for the Senate, no matter who your Senators are!

What Can You Do

“No one should be forbidden from making a sacred commitment to the person they love. Defend LGBTQ+ and interracial couples and families: pass the Respect for Marriage Act. Sign up to phone bank with @HRC mobilize.us/hrc/event/482839/”