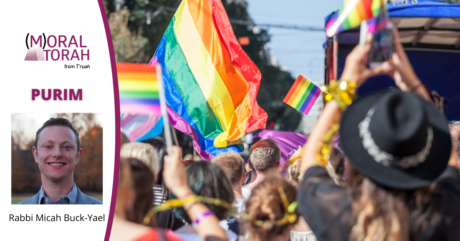 As a Queer and Trans Jew, Purim has long held a special place in my heart as a holiday that envisions a world in which oppression can be turned upside down, in which coming out can be liberatory and world-changing, and miracles come to life through the actions of real people. It is a world in which humor is essential to our survival, and in which joy is the centerpiece of our activism. As we read the megillah (the story of Purim told in the Book of Esther), I reflect on how much I recognize in it a world in which capricious and self-interested political leaders can endanger the lives of a marginalized community with the sweep of a pen (or, as King Ahashverosh does, with the seal of a ring). For too long, the basic rights of LGBTQ people to live in safety, to access medical care, work, housing, or to go about our daily lives have been subject to the fickle whims of leaders and politicians. Basic protections have been enacted or removed by fiat. LGBTQ people and all marginalized communities are too often left without stable legal protections as politicians toss our rights around as approval ratings ebb and flow.

On Purim, we look to one model of how to work for greater safety, dignity, and liberation against such a backdrop of uncertainty. Esther carefully and courageously uses her position as queen to stop the genocide against the Jews that Haman and Ahashverosh have planned. She is a thoughtful, strategic, and daring hero who uses every tool available to navigate the dangerous and uncertain world of Ahashverosh’s court, and takes substantial risks to uncover Haman’s plan and shift the balance of power.

Much as I love the story of Purim as a model for activism and celebration, I find the end of the story unsatisfying. The genocidal Haman is removed from power, and Mordecai is installed in his place. But one can’t help but notice that Mordecai’s power is just as dependent on the whims of an unreliable king as Haman’s was. And, if anything is clear from the story, Ahashverosh is easily swayed. The safety and celebration of Purim feels precarious and temporary. We celebrate, but there is an undercurrent of worry to the celebration.

The rabbis of the Talmud wonder about this, too. They notice that, although Purim is a holiday that celebrates a miracle, we do not recite Hallel on Purim. They suggest the following reason for refraining from reciting the psalms and praises of Hallel:

Although we celebrate the miracle of increased safety and security that was won on Purim, we recognize that it is incomplete.

It is true that at this moment we have a relatively pro-LGBTQ administration, and that President Biden has restored and expanded many protections for LGBTQ Americans through executive orders. But there is far more to do. In a 2020 survey, 1 in 3 LGBTQ Americans — including 3 in 5 transgender Americans — reported that they had experienced discrimination within the past year. This is still a reality for many of us in housing, medical care, public spaces, and more. Our basic rights should not be subject to the rhetoric of each political campaign and the whims of our leaders. Meaningful protections cannot depend on the administration or political landscape of the moment but must be built into the law itself. This is precisely why Keshet is working right now to mobilize the Jewish community to support the Equality Act.

The Equality Act is a bill that would update the Civil Rights Act to prohibit discrimination on the basis of gender identity or sexual orientation in employment, housing, public accommodations, education, federal funding, credit, and the jury system. It is clear that antidiscrimination laws make a real difference in the lives of LGBTQ Americans: the 19 states and 200+ cities that have enacted comprehensive legal protections have proven this. For the first time, passage of the Equality Act would establish these basic protections on a national scale for LGBTQ Americans.

The Jewish tradition urges us to strive for justice, equality, and human dignity. We encourage you to raise your voice in support of full equality for LGBTQ Americans. Please join our advocacy around the Equality Act as we mobilize Jewish communities nationwide. On our site, with a few clicks you can send a message to your two senators and your representative urging the Equality Act’s passage.  If you want to do more, you can also request postcards that you can fill out and send to your congresspeople. Right now, we have the power to use our collective voice to move this important legislation forward and to make real gains in the civil rights of LGBTQ Americans.

It is particularly important that we do this work as a Jewish community. So often, religion is used as an argument against protecting LGBTQ rights. But the Jewish tradition teaches us a different lesson about the relationship between LGBTQ rights and religion. It is precisely our Jewish stories, traditions, and texts that teach us about the importance of protecting the dignity and safety of each person. This is core to a Jewish vision of a just society, and each of us is empowered to do our part to make that vision a reality.