This lesson is about recognizing Kate Bornstein, as well as interacting with her writing on gender and other social identities. Depending on the age, maturity, and previous experiences of your participants, you can choose a more specific activity (like gender boxes in the “extras” section) or a more broad one like the “think” and “reflect” activities below. 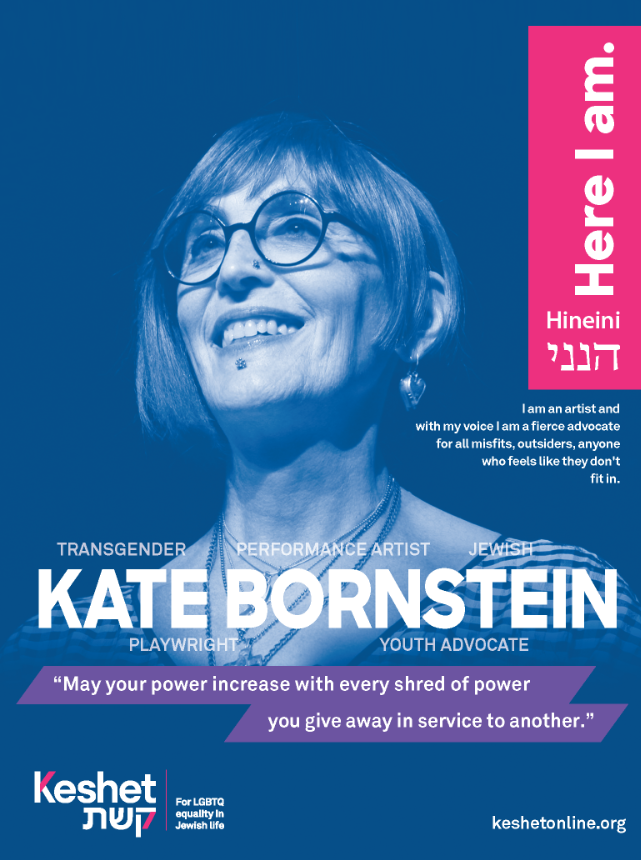 Read aloud or have a student read aloud

Kate Bornstein (any pronoun works) is a writer, performance artist, and gender theorist. Kate is nonbinary: not a man, and not a woman—and she’s been writing about nonbinary gender identity for nearly thirty years. She has written numerous books including “Gender Outlaw,” “Hello Cruel World: 101 Alternatives to Suicide for Teens, Freaks, and other Outlaws,” and “My Gender Workbook.”

At the beginning of the COVID 19 pandemic, Keshet launched a series of interviews with LGBTQ Jews. One of these interviews was Kate Bornstein. Here is a clip of a conversation between Kate and Dubbs from Keshet about the power of words and the limitations of language.

Say, “Dubbs and Kate talked about how some labels feel restrictive and suffocating, while others felt empowering and freeing. Gender is one identity, but we all hold many identities at once.” Include an example of one or two identities you hold, including the category and the identity. (ie – “I have a religion [I’m Jewish] and I have a race [white].”)

Ask, “What are other identity categories?”

In-person: Ask students to answer aloud, and write categories on the whiteboard.

If there are categories missing, prompt students. (i.e. You can ask, “What about how we move around and navigate society?” to elicit “ability” as a category.)

Make sure to have at least religion, race, gender, sexual orientation, ability, class, citizenship on the list.

Say, “Dubbs and Kate mentioned some labels that feel oppressive and others that feel expansive and empowering. What works for one person may not work for another. We’re going to do an activity called red light/yellow light/green light to think through which words work for us and which don’t.”

Virtual:  Share your screen and show the “Red/Yellow/Green” slide. Have participants annotate the slide by adding words in each column. Participants should add words that describe their OWN identities, and should be placed in the appropriate column indicating how they feel about that word. Discuss.

In-person: Set up three pieces of butcher paper, one for each column. Or, create these columns on a whiteboard. Participants should add words that describe their OWN identities, and should be placed in the appropriate column indicating how they feel about that word. Discuss.

NOTE: The same word may be a “green light” for someone and a “red light” for another. For example, the words “queer” or “Jewess” or “disabled” are embraced by some and rejected by others. This is OK! The group does not need to come to consensus. Rather, you can drive home the point that it’s important to listen to people’s choices and honor their preferences. If hurtful slurs show up in the red light column, you can acknowledge that it’s hard to even have that word in the classroom space. You also might choose not to actually say the word itself. Emphasize the fact that the word is commonly understood to be a slur, and is in the red light column, meaning it’s a word that the group will agree not to say or use in your community.

Say, “We all hold multiple identities, whether we spend a lot of time thinking about them or not. Society makes some of these identities easier to live with, while making others more difficult to live with. We’re going to do an activity to reflect on how these identities impact how we live. We are going to think about several identity categories one by one, and indicate whether the identity you hold in that category is making your life harder or easier.” (You can give an example here using one of your own identities. “If the category were religion, I would think of my own religion, which is Jewish. Because this society generally values Christianity above other religions, I would move closer to the ‘making my life harder’ side of the room/line.)

Virtual: Set up a slide with a horizontal line in the middle, with “completely controlling your life for the worse” on the leftmost point, and “making your life a whole lot easier” on the rightmost point.

Say or type one identity category (i.e. “gender”) and have participants use the “stamp” feature on Zoom to place one stamp on the spectrum indicating if their identity is making life harder or easier. Once everyone has placed their stamp on the spectrum, ask a few people to share why they chose the position they did. Alternatively, if the group does not have high trust/cohesion, do this as a silent anonymous activity without asking participants to explain their placement. Then move on to the next identity category.

In-person: Clear a space in the classroom and put up a sign on one side of the room reading “completely controlling your life for the worse” and on the other side a sign reading “making your life a whole lot easier.”

Say one identity category (i.e. “gender”) and have participants physically move along the spectrum indicating if their identity is making life harder or easier. Once everyone has found a place on the spectrum, ask a few people to share why they are standing where they are. Then move on to the next identity category.

We just saw how different identities impact different people’s experience in this world. I also want to note that the last activity listed one identity at a time, but in reality, we all hold many identities at the same time and they interact with each other to impact our experiences in the world. Some identities are visible, and some are not. Some of us may have been surprised to see our peers’ answers in the last activity, which is a good reminder that we really can’t make assumptions about others’ experiences. What we can do is remember that we are all created in the image of G!d (b’tzelem elohim) and all deserve respect (kavod).

Share Keshet’s “Seven Jewish Values” poster which outlines seven Jewish values for building a welcoming and inclusive community. Have students pick one value (or you can pick one that relates to past conversations or classroom rules) and discuss how this value relates to what you learned to day about Kate Bornstein, the power of words, and/or personal identities.

if you have more time, multiple lessons, or want to assign homework