The Landres Courage for Dignity Award

About the Landres Courage for Dignity Award

Keshet, the leading national organization working for LGBTQ equality in Jewish life, is proud to award the Landres Courage for Dignity Award, expressing the commitment of Dr.Peter z”l and Renata Landres to the equal dignity of all people.

Keshet’s mission is built on the knowledge that the work of LGBTQ inclusion strengthens and enriches the entire Jewish community and beyond. This award honors individuals who have committed themselves in exceptional ways as allies to the LGBTQ community and as partners in advancing the full equality and inclusion of LGBTQ people.

What is the Landres Courage for Dignity Award?

The purpose of the Landres Courage for Dignity Award, designed by Shawn Landres, is to honor the commitment of his parents Dr. Peter z’l and Renata Landres, to the equal dignity of all people. The award, which is given to a deserving recipient who has exhibited public courage as an ally in the cause of advancing and assuring the inclusion of LGBTQ people, or more broadly, who has used their privilege even at some personal risk or cost, to ensure dignity for someone or some group with out privilege. The recipient may be one or more individuals, members of a family, a group, or an organization.

ABOUT THE FOUNDERS OF THE AWARD 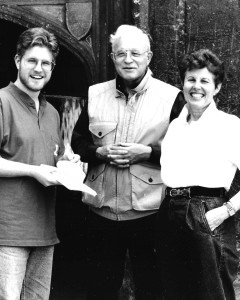 Dr. Peter David Landres z”l, a child, adolescent, and adult psychiatrist and psychoanalyst, devoted his professional life to helping people find shelter from the storms of the mind. His generosity of spirit could be found in his capacity to listen without judgment and to give wise, compassionate counsel.

He defied the psychiatric orthodoxy of his day that pathologized non-heterosexual identities; he accepted and forged friendships with people without regard to sexual orientation or gender identity, let alone any other marker of difference.

Renata Landres—whose early childhood is, among other narratives, the story of people in Central and Southern Europe putting themselves at risk to protect her family—has dedicated herself, through teaching, counseling, and financial advising, to helping people assert their own agency and dignity, regardless of race, gender, age, or immigration status.

Renata and Peter imparted these values to their son, Shawn, who has sought to live them out, in part, through his service to Jewish Mosaic and Keshet.