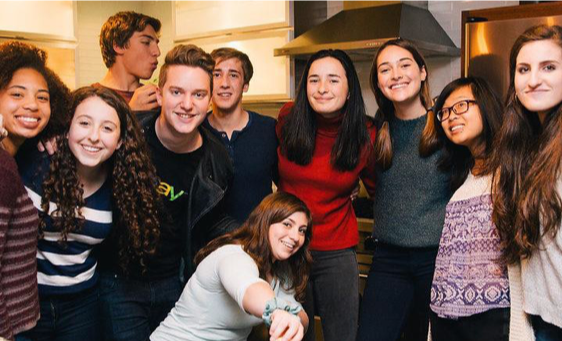 Do you remember Kix cereal? Perhaps you recall the slogan, “Kid Tested, Mother Approved.” At the Jewish Teen Education and Engagement Initiative (the Teen Initiative), we are bringing back that catchphrase, but with a modern spin: “Org Tested, Teen Approved.”

This fall, the Teen Initiative launched its first micro-grant request for proposals titled the “Experiment in Engagement Challenge.” The grant summoned organizations to disrupt the current landscape with fresh and innovative ideas to expand their reach to teens who are marginally involved in Jewish life.

But in this experiment, the teens found themselves guiding the way. Eight teens, all of whom were alumni of the Federation’s Jewish Teen Foundation program, comprised the Review Committee and were charged with evaluating the 19 proposals and making funding recommendations.

Over two Sunday afternoons I was reminded of why I love working with teens. They were insightful, kind, and inclusive, asking thoughtful questions and grappling with proposals. They put aside their own biases and preferences to consider what opportunities provided low barriers to entry, and which were truly unique offerings that would appeal to the diversity of teens that make up the Bay Area Jewish community. They displayed a sensitivity toward their peers, careful to ensure that J-Text’s Jewish trivia questions weren’t so difficult that teens lacking that knowledge wouldn’t feel inadequate or excluded. They appreciated when communities let teens fully take the lead, like Congregation Shir Shalom’s Sonoma Teen Seder, designed and led by teens for teens. They were excited by organizations like Urban Adamah and the Jewish Film Institute that offered new points of entry through niche programming focused on learning specific skill sets, providing an alternative to more socially-driven programming.

The Teen Initiative Advisory Committee (comprised of adult volunteers) were impressed by the teens’ insights, desire for inclusivity, and interest in funding unique opportunities. In fact, they adopted five of the Review Committee’s six recommendations and were able to include four additional proposals which were ultimately approved by the Federation’s Board of Directors.

Teens, like all of us, want to be seen, valued, and able to contribute authentically. We know from the “Effective Strategies for Educating and Engaging Jewish Teens” report that giving teens “skin in the game” can create more buy-in and increase involvement. This age group is curious, smart, and compassionate, and they have set high standards for themselves and the organizations that they fund. As the Teen Initiative continues to partner with our youth in meaningful ways, one thing is for sure – it’ll be the teens themselves who deserve the credit for trailblazing their own bright future.

Offers 20 Bay Area Jewish teens the opportunity to travel to NYC for a global Jewish diplomatic advocacy seminar, with an educational workshop at the AJC headquarters in NYC and advocacy meetings with diplomats at the United Nations.

An easy, fun Jewish trivia texting game to meet teens where they are, engage them Jewishly in a creative and fun way with incentives for participation, opportunities to learn Jewish concepts and culture, win prizes, and connect with other Jewish teens.

A monthly Shabbat morning meet-up for teens focused destress and personal wellness. Workshops will differ monthly by presenter and topic.

A teen seder planned and organized by Congregation Shir Shalom teens for their peers throughout Sonoma Valley, including food, music, dancing, decorations, and Jewish ritual.

Local Jewish teens will host Israeli teens from Hod Ha’Sharon, Israel for a week in June 2019. Programming includes day-long adventures to places like San Francisco, Six Flags, Stinson Beach, and Pixar, as well as an overnight retreat, all designed to bond the teens, deepen their Jewish identity, and offer a fun and unique way to engage with Israel.

A group of teens will jury a prize given to a short film at the San Francisco Jewish Film Festival. This includes an opportunity to learn about film selection and to critique, review, and discuss 6-10 short films with Jewish content. Teens will present the juried prize to the filmmaker at the summer Festival and engage in a public Q&A with the filmmaker.

A day-long workshop for Jewish LGBTQ and ally teens to celebrate and provide visibility for trans and nonbinary teens within the Jewish community. This program will be open to all LGBTQ teens and allies,

connecting them to LGBTQ adults with whom they can identify with and relate to and providing them with educational learning, advocacy exploration, and a time of community and togetherness.

A series of three Sunday afternoon workshops for teens to explore fermentation, medicinal herbs, and baking through Jewish tradition and mindfulness activities in a community farm setting.

A multi-night wilderness experience for rising and newly-graduated high school seniors to bring ritual to this auspicious time in their lives, marking the transition from adolescence into adulthood.