When Jewish Transgender Teens Come Out of Closet, Many Leave Camp Behind 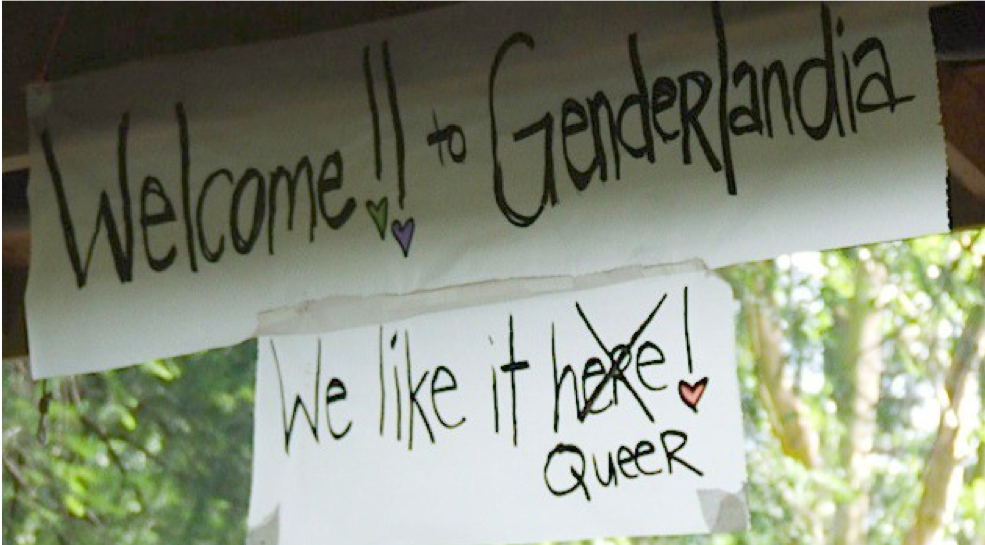 Beyond Labels: Camp Ten Trees in the Pacific Northwest caters to transgender kids.

At summer camp, sneaking into the boys side or the girls side is as classic an activity as roasting marshmallows. But what if the side you were assigned isn’t where you think you belong? Or what if you don’t fit into either side?

Jewish summer camp — with its gender-segregated bunks, bathrooms, activities and rituals, not to mention emphasis on heterosexual “hookups” — can be a minefield for transgender kids and their families, a newly-visible population that is gaining increasing recognition in the Jewish and political mainstream.

Now, just as public schools are complying with legal orders to allow trans children to use the bathrooms of the gender they identify with, camps, too, are becoming aware that trans kids have always been present among the legions of youngsters who hop off the bus for a summer of fun. Making Jewish camp trans friendly is a brand-new undertaking, and no one knows exactly what lies ahead.

“Alex,” a 15-year old transgender boy from Newton, Mass., attended Eisner Camp, a Reform Jewish sleepaway camp in the Berkshires, for three years before he came out as transgender. (Alex asked that the Forward identify him by a pseudonym to protect his privacy.) He slept in the girls bunk and was treated as a girl. Sports, which were coed, were a favorite activity, and the Jewish traditions and community at camp were “cool” and “interesting,” he said. But at age 11, as he began to consider living as a boy, Alex chose not to return to the camp. “I didn’t want to have to go through being in that awkward in-between phase of, ‘Which cabin did I go to?’” he said. His mother jokes that he blamed his choice to leave on the dining hall food. But Alex added, “The vibe I got was that the counselors or older people, the campers, wouldn’t be that great about [my transition].”

Instead, in 2010, Alex attended the inaugural session at Camp Aranu’tiq, a nondenominational weeklong program for trans and gender-variant youth, founded by Nick Teich, a transgender Jewish social worker. While Alex returns to Camp Aranu’tiq each summer, he said that he’s still nostalgic for Eisner Camp; he wishes he could have had both experiences. “I liked the community at the Jewish camp,” he said. “It felt like regular camp.”

Alex’s story is similar to those of other trans youth and families with whom the Forward spoke: Kids report a positive Jewish camp experience initially, but when they come out as transgender they disconnect from camp. Sometimes campers bow out on their own, as Alex did; other times, they may not be asked to come back as counselors or as counselors-in-training, losing that final connection to a community they love.

Some Jewish and secular camps are actively trying to stave off this parting of the ways, while others are just beginning to consider transgender issues. Trans kids are a “hot” discussion topic in the camping world, says Peg Smith, CEO of the American Camp Association. “The trans kid at camp is not a risk, the risk comes with not knowing how to manage it well,” she said.

For Jewish camps in particular, knowing how to include trans kids can be an important part of maintaining a mission. “Summer camp is understood in the Jewish community to be one of the most impactful spaces for young people,” Joanna Ware said. Ware, who works for Keshet, a Jewish lesbian, gay, bisexual and transgender group based in Boston, conducts inclusion trainings for camps. “If [trans kids] feel alienated at camp or if they feel affirmed, that can affect how they feel about a Jewish space.”

Perhaps because so few transgender kids remain at Jewish camp after they transition, camps have little experience in making them feel welcome. Representatives from several Jewish camps said they had trained to be “inclusive” but had not encountered trans kids or made specific accommodations for them.

For instance, Louis Bordman, senior director of Eisner Camp, said the camp strives to be a model of inclusivity with co-ed activities but hasn’t made some basic changes to welcome trans kids, like creating a gender-neutral bathroom.

“We train our staff on working with LGBT campers along with working with introverts and extroverts” and other diverse campers, he said. “We maintain an accepting environment based on Torah and Jewish values.”

“Our experience is limited in the area, but we train our staff to be aware of different configurations of families,” said Nancy Scheff, communications director of the National Ramah Commission, a network of camps affiliated with the Conservative movement. “Individual camps may have made plans, but we’re not aware of it within the national office.”

Officials at the Foundation for Jewish Camp, an advocacy group for Jewish camp professionals, said the organization was also unaware of specific camp policies but had participated in trainings on the issue.

But LGBT camping experts say that this approach is lacking. “A camp needs to do more than simply label itself inclusive,” said Airen Lydick, executive director of Camp Ten Trees, a not-for-profit in the Pacific Northwest that hosts camp sessions for kids and families with a range of sexual and gender identities. “It takes work.”

For instance, camps should consider the particular ways that transgender kids come out over the summer, Lydick said. They may want to sleep in a different bunk, wear different clothing, use new pronouns or be called by a new name.

Elsa Vasquez, director of Camp Common Place, a similar organization in the Hudson Valley, agreed that there’s a lot to consider in advance.

“As just one example, it’s important to create an environment in which people’s preferred pronouns are not just assumed,” she said. “How do you deal with swimsuits? What if someone wants to wear a swimsuit of the opposite gender, or isn’t comfortable showing off their body?”

If camp officials don’t go out of their way to make transgender kids feel welcome, Lydick said, “campers are in the same place they are in the rest of their lives: a world that doesn’t understand.”

Welcoming transgender children, however, becomes complicated when camp directors must weigh the needs of trans kids against the feelings of the parents of other campers.

According to Teich, who has conducted inclusion trainings with Jewish and secular camps, many directors worry that parents will reject the idea of a transgender girl staying in the girls cabin, or a transgender boy in the boys cabin.

Camp directors, he said, “are very fearful of what the parents of other campers will say.” He acknowledges that there’s no one-size-fits-all solution. But he encourages camp directors to look beyond bathrooms, bunks and bathing suits to focus on the broader needs of trans kids, many of whom haven’t undergone surgery or physically transitioned yet: Will they be called by their preferred names and pronouns? Will they be able to express themselves freely? Will they be protected if they are bullied?

Alex, the former Eisner Camp camper, agreed. For him, getting pronouns right every single time is “important,” but “being overall accepting is more important, because people will know that you’re actually trying.”

“Camp directors get so worried about some of the little logistics like bathrooms, or about what the parentsof other kids think, they might not remember that this is supposed to be a loving community,” said Emily Rosenbaum, a mother of a transgender child who had a difficult time coming out as transgender at a Jewish camp and did not return. (Her other child, who is not transgender, still attends the same camp.)

“Camps have enough bathrooms, enough spaces. This thing could all be figured out without having to send kids home,” Rosenbaum said.

Alex’s mother, who asked not to be named, echoes Rosenbaum’s point. She notes that camps already deal with potentially awkward situations around gender and sex. “We know there are LGBT campers, which means you have people who are attracted to the same sex in the same cabins. And we know stuff happens at a co-ed camp that is not appropriate,” she said. “So why is this such a problem?”

Ware said that camps must figure out these issues on a case-by-case basis. Not every transgender boywants to sleep in the boys bunk, she notes. It depends on what each camper wants and where each camperwill feel safe. “Maybe he’ll be fine because girls are the ones he’s been with for years,” she said. “Maybeall he wants is to not have his counselors saying, ‘Girls, let’s get ready for Shabbat.’”

Ware helps camps examine every aspect of programming, from ceramics to canoeing to candle lighting,on Friday night to see if there’s a gender component that can be made more inclusive. But she alsoencourages them to look beyond the programming to their philosophies. It may be more important in thebig picture to stick up for the needs of a family of a trans kid, even if it causes discomfort for other campparents, she said.

One way to encourage this, Ware said, is to get CITs and counselors who have been at camp for yearsinvolved in policy and philosophy changes so that they’re “invested” in being inclusive and can monitorthe environment actively. Counselors set the tone. “Kids really look up to the counselors. They’re that agewhere it feels kind of like an older sibling,” Alex said.

Though most Jewish camps are still fumbling their way through transgender inclusion, one small Reconstructionist camp in the Poconos has taken a small but definitive step to show that it means business.

“We’ve always in our dining hall had gender-neutral, single-stall bathrooms, but this year, we put new signs up on the door: ‘These bathrooms are available to all regardless of identity,’” said Rabbi Isaac Saposnik, director of Camp JRF. “The bathroom itself hasn’t changed, but the statement externally has.”

The staff wants visitors to walk on campus, he said, and to immediately feel welcome. Saposnik said that his camp has been able to move more “nimbly” on issues of transgender inclusion than larger Jewish institutions might, but he acknowledges that it has still been imperfect. Still, he said, “We’ve moved from training our staff on ‘What happens if a camper comes out?’ to ‘How do we create an environment where everyone feels safe and supported?’”

“It’s not only about the nitty-gritty specifics. It’s a real tikkun — it’s an opportunity for the Jewish community to say that we are living our best values.”

Sarah Marian Seltzer is a journalist and fiction writer based in New York City and a contributor to the Sisterhood blog. She tweets at @sarahmseltzer.