What the DOMA Decision Means for Boston Jews

And the Lord God said:

Yesterday’s Supreme Court decision striking down Section 3 of the Defense of Marriage Act (DOMA) restored previously denied federal rights to legally married same-sex couples across the country. They also issued a ruling that has the effect of overturning California’s Proposition 8, the piece of legislation that denied queer Californians the right to legally marry. As a queer Jew, I’m celebrating today with my comrades and allies across the country. But what, exactly, does this mean for gay, lesbian, bi and queer Jews in Boston?

It means that couples like Dan and Keith, a bi-national gay couple, will no longer be forced into exile in South Africa. Dan and Keith’s marriage will now be recognized by U.S. immigration law. The repeal of DOMA grants them the right to live in the United States as partners, without living under the shadow of the fear of Keith’s deportation.

It means lightening the economic burden placed on same-sex couples by a discriminatory federal tax code. Same- sex couples may have been paying upwards of $6,000 more in taxes than straight couples. That easily covers the cost of synagogue membership at synagogues across Greater Boston, and takes a chunk out of a year’s tuition at a Jewish day school. 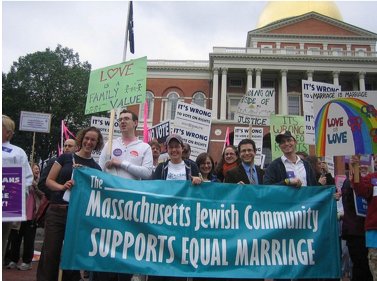 It means that—chas v’shalom (God forbid)—when our spouses die, we will be able to receive Social Security survivor benefits, and have one fewer thing to worry about in our darkest moments of grief and mourning.

It means 1,138 fewer roadblocks to fully living Adonai’s word—that it is not good for the human to be alone.

Yesterday, the Supreme Court affirmed what many Jewish communities across Massachusetts have been saying for years: all human beings are created b’tzelem Elohim, in the image of God, and deserve to live lives of full dignity and justice.

Our work is far from over. To name just one continuing struggle, transgender people in Massachusetts can still be denied basic protections and access to public spaces. (You can get involved in helping to change that here!)

But today? Today is a day to celebrate.

Joanna Ware is the Lead Organizer and Training Coordinator at Keshet and is working to transform the Jewish community into a place of full inclusion and welcome for lesbian, gay, bisexual, transgender and queer Jews. She is a queer femme, making home and community in Boston, and originally from Southern California. You can find her [infrequent] writing and tweeting at queeringjew.com and @QueeringJew.