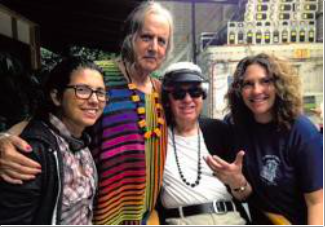 AUBURNDALE – Mayyim Hayyim Living Waters Community Mikveh here has some Hollywood magic on its side this Mother’s Day. Faith Soloway, a writer and producer on Amazon’s hit show, “Transparent,” encouraged people to give to Mayyim Hayyim for the holiday, which is of particular significance to her family.

Soloway wrote a short piece on Mayyim Hayyim’s commitment to gender inclusion, which the mikvah sent out in an email blast and posted on its blog. In the piece, Soloway asked others to join her in donating to Mayyim Hayyim in honor of a “special woman” in their lives.

Soloway’s moppa – a family term that combines ‘momma’ and ‘poppa’ – came out as a trans woman at 72. The family’s experience, including the influence of Judaism, inspired the award-winning show, which Soloway’s sister, Jill, created.

“We weren’t the most religious Jews,” Soloway, who lives in Brookline, told The Jewish Advocate. “I am the least customarily Jewish person in the family.

“Still, there’s something that really spoke to me about the idea of the mikvah, how it’s so deeply personal,” she said.

“It would be so cool if my moppa could come and enjoy it,” she said, “but that’s kind of a fantasy.”

Although Soloway is doubtful that her parent would use Mayyim Hayyim’s services, Carrie Bornstein, the mikvah’s executive director, said her staff is working to include the transgender community more explicitly.

“Since we opened, people who fall outside of typical gender roles have come here to immerse, for things that have to do with gender transition and things that don’t,” Bornstein said. “We’ve had people who are transgender come from the beginning.”

“We’ve had training for our mikvah guides and we partnered with Keshet to provide those trainings,” she continued, referring to the local Jewish LGBTQ organization.

“We’re in the process of creating an [immersion process] to mark a moment on a gender transition,” Bornstein said. This new immersion process is part of what drew Soloway to support the mikvah, along with, as Soloway said, the “queerness in general.”

“It’s such a wonderful thing to see an old ritual redone and wrapped around all kinds of communities, not just for Jews anymore,” Soloway said.

“I made a visit and kind of fell in love with the place, specifically the idea for people who are transitioning of this being a restart and rebirth,” she said. “[It’s] the liberal idea of how to use a mikvah.”

Bornstein said she reached out to Soloway through a mutual friend after she saw an episode of “Transparent” that involved a mikvah. She hoped the show would consider Mayyim Hayyim and herself a resource for location, content ideas and consulting.

“[The episode] was another example of mikva’ot making its way into mainstream culture,” Bornstein said. “It’s always exciting to see, but my opinion in general, when I see these things, ranges from ‘Isn’t that amazing?’ to cringing.

“‘Transparent’ did a really good job,” she concluded.

Bornstein said she was impressed with the way “Transparent” integrated “Jewish ideas and ideals into the show in a way that feels really real.”

“Our generation never did the mikvah because we looked at it for more Orthodox and Conservative people,” Soloway said. “But it’s such a beautiful ritual that I think women are wanting to find a way to make it intrinsic to themselves.”

Despite the inclusion of the mikvah on the show, Soloway herself has never immersed. Still, she said there are things “drawing her to it.”

“I never had a bat mitzvah,” Soloway said. “So maybe, before I die, I can [immerse] and have some sort of real conversation with God.”