Inspired the story of a thirteen year old trans boy, Tom Chai Sosnik, whose coming speech out to his school went viral, trans Rabbi Becky Silverstein wrote a open letter of support. In it, he compares the story of the exodus, celebrated by Jews at Passover, to the courage of LGBT teens coming out. He also praises Tom’s family, school and Rabbi for their support. 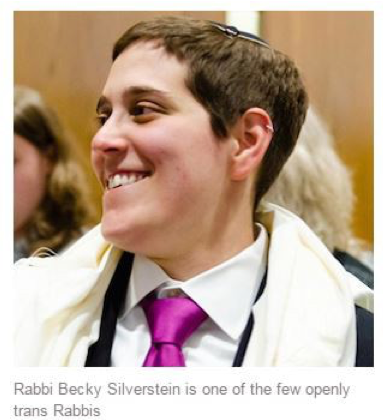 Rabbi Silverstein, of the Pasadena Jewish Temple and Center, California is one of the only openly trans Rabbis in the world.

He writes: “Tom, we have never and may never meet, and yet I feel as though I know you.

“I see in your face the faces of the LGBTQ Jewish teenagers I have had the opportunity to work with in my time as a Jewish educator and rabbi. In your face, I also see a vision of what I want so badly for our Jewish community to be: a place where everyone can be celebrated for the entirety of who they are and where nobody feels the need to hide a piece of their identity.

“The moments before and during the actual exodus from Egypt were extremely risky. How could the individual Israelites be sure that they would be redeemed? And yet, in order for our story to continue, each individual needed to take a risk, needed to take a leap of faith, and perform the Passover sacrifice.

“Lastly Tom, there are folks in this world who just don’t get it. Here’s a bit of unsolicited advice: approach them with compassion, don’t read the comments, and remember, I’ve got your back.”