At a Sunday morning religious-school class, a Jewish studies teacher casually asks a student about the high-school dance the previous night and whom he brought as his date.

In a class discussion about the Book of Genesis, a Hebrew teacher talks about how God created man, who needed a helpmate. So God created woman.

A Jewish youth-group leader informs newcomers that the boys’ bathroom is down the hallway to the right and the girls’ room is to the left.

Unwittingly, these educators and leaders may be excluding gay, lesbian, bisexual and transgender (GLBT) Jews from the conversation, the curriculum, and even the institution. Questions and comments like these can make GLBT Jews uncomfortable, and they may see them as disrespectful and upsetting.

“These (remarks) are not actively homophobic, but they make assumptions about who those kids are or what they want,” says Andrea Jacobs, director of education for Keshet, a Boston-based organization that sponsors the Hineini Education Project National Training Institute. Recently, Hineini came to Cleveland to train Jewish educators, rabbis and youth-group staff to help them better “celebrate and affirm” GLBT youth.

Eight Clevelanders took part in the three-day training; another 16 people from across the country attended. Participants were fairly evenly divided between straight and GLBT Jews, says Jacobs.

The training focuses on gender stereotypes, identities, Jewish values and Jewish perspectives on gender diversity. Sessions seek to provide participants with materials, skills and activities to use in their curricula, lesson plans and programs.

“It’s not a radical reading to say the first being in Jewish tradition was transgender or androgynous,” says Idit Klein, Keshet director. “Ancient midrashim reflect that. They’re not the ones that are taught.”

It’s important, Klein insists, that educators expand the narrative imparted to Jewish youth. Through her work at Keshet, Klein says she’s heard a lot of painful stories of exclusion and rejection. 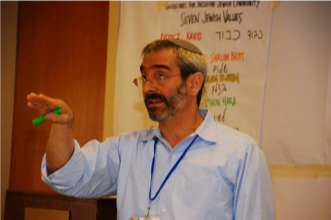 Youth-group leaders and educators at Jewish institutions can make a difference for GLBT Jews, she adds. “How do you respond when ‘That’s so gay’ (meant as a pejorative) comes up in students’ conversation?”

Teachers must also recognize that some children come from families with two moms or two dads, and the culture modeled in school should reflectthose possibilities. Even the mock wedding, a popular way to teach young children about Jewish lifecycle traditions, can be distressing to someone growing up in a family with same-sex parents.

Furthermore, the purpose of the Hineini training is to “build local capacity,” Klein says. Those who attend the training can teach colleagues in Cleveland so they, too, can create classrooms and youth groups where GLBT youth feel valued as people and as Jews.

During one training session, attendees talk about their own experiences of rejection. One Keshet staff member says over 20 years ago she was fired as regional head of a Conservative Jewish youth group because she was a lesbian. “I was in a state of suspended disbelief that I could be exorcised from my community.”

While not always as straightforward as being fired, messages of exclusion are “out there all the time in the Jewish community,” says Keshet’s Jacobs.

Questionnaires asking gender or marital status, bi-gendered bathrooms, and the mechitzah (divider between men and women in prayer services) all treat GLBT persons as “other,” excluded from the community, note several participants.

“I identify as a woman, so it’s not an issue for me walking into a woman’s bathroom,” says a woman with very short hair, dressed in khakis and a plaid shirt. “It’s how I am perceived (by others using the bathroom that’s the problem).”

“If you don’t identify as either a man or a woman, there’s no physical space for you,” adds a woman in a business suit who teaches at a Jewish day school.

Studies show there is a higher rate of substance abuse and suicide among GLBT people, says Eric Pliner, one of the Keshet trainers. “They are 10 times more likely to carry a weapon in school.”

Those who attended the institute praise the training as impressive and thought provoking. “They help you develop skills to hear what kids are saying, to listen non-judgmentally,” says Sheila Balk, director of the adolescent initiative of the Jewish Education Center of Cleveland. “You want to create a positive and open place for kids.”

The training made her aware of simple things, says Paula Goddard, a religious-school teacher at Temple Emanu El. “Before I saw the big picture. Now I’m starting to see the little pieces.”

Hineini was “eye opening in a number of ways,” says Rabbi Alan Lettofsky of Beth Israel-The West Temple. “To interact with people of various sexual orientations-not only gay and lesbian, but transgender-was enlightening and humbling. The things we say, the way we tend to think about the world and don’t even reflect on it are hurtful and exclusionary to people who don’t fit neatly into categories we use.”

Jewish leaders and educators have a long way to go to get to the point of truly accepting and affirming GLBT Jews, Lettofsky says. “It’s not enough to tolerate or even welcome them as guests. We need them to feel that they are us.”

The younger generation, he notes, is far more open and accepting of GLBT people than their elders. “We heard stories over and over about parents calling in advance of youth-group conventions, insisting their child not room with so and so, who was rumored to be homosexual. These are issues the parents have that the kids don’t have at all.”

In one activity suggested for use in the classroom, participants identify dozens of negative and positive stereotypes associated with being Jewish or gay or transgender or another marginalized community. Many of those attending the training are concerned that the activity would reinforce such stereotypes in impressionable students.

But, one attendee counters, “It puts everything on the table, assesses attitudes, and shows we can talk about taboo subjects.”

For Jewish youth who have never had to think about the experiences of a lesbian or of a gay man, the exercise has value, says Keshet’s Pliner. “Looking at the parallels in experience between anti-Semitism and homophobia, high school kids are amazed to see the overlap.”