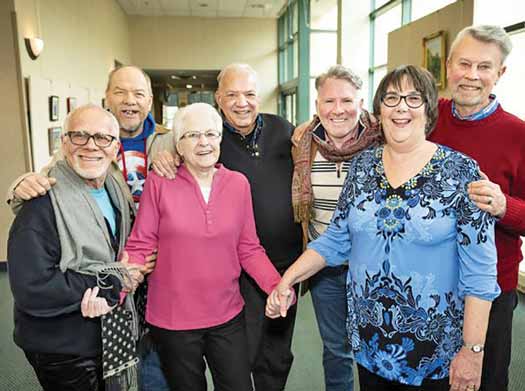 Aging With Pride at the JFCS in Cherry Hill

For Reva Farenback-Brateman, LGBTQ programming at the Jewish Family & Child Services of Southern New Jersey (JFCS) began after meeting a couple at Memory Cafè, a space facilitated by Farenback-Brateman dedicated to those with memory loss, Alzheimer’s, and dementia. The two men have been together for decades, traveling through times of violence and peace within LGTBQ history. Upon noticing this lifelong pair, Farenback-Brateman thought, “What has it been like for them?”

Farenback-Brateman said it was this couple (one gentleman in his 80s and the other in his 90s) that inspired the focus of LGBTQ elders in a new group titled Aging with Pride. The first meeting was held in April of 2018. An original seven attendees grew to an emailing list of 42, where 32 of those 42 have come to at least one meeting. Farenback-Brateman shares that she is cisgendered, straight, and in her 60s. Having been an ally for decades, it came to Farenback-Brateman’s attention that there was much more for her to learn upon opening up LGBTQ programming ideas.

“We want to make sure a client walking in feels welcome,” said the Associate Director of JFCS and LGBTQ ally, Beth Wynne. Wynne said that the JFCS’s journey started three and a half years ago. The center began contacting the umbrella organization of The Network of Jewish Human Industries. The service center became a part of a cohort of agencies under The Network and started with all day training with JFCS to manifest their mission for equality. Training came under partnership with the LGBTQ Jewish, support, and training organization Keshet and the JFCS of Philadelphia. Wynne had a mentor named Pheonix who assisted in changing the bathroom signs, adding the pride flag, competence training, and helped with programs such as The Rainbow Table designated for LGBTQ people 18 and up. Pheonix’s visibility as a transgender social worker gave the youth of The Rainbow Table a story and life they could relate to.

Many LGBTQ elders come from Philadelphia to meet with Aging with Pride. The programs are free thanks to funding by Camden County Board Freeholders and private donations.

Some group members also go to the LGBTQ William Way Center in Philadelphia. The center wants to ensure that all LGBTQ community members have outlets. By paying attention to the diversity of people attending LGBTQ programming, the JFCS is able to see where the needs are. For example, Farenback-Brateman said that she wishes Aging with Pride had more lesbians. This holds true in other groups like The Rainbow Table. Similarly, the JFCS is finding there are fewer 20-somethings and transgender individuals attending. With this knowledge, the organization hopes to broaden not just their numbers but all the letters of the community.

What Farenback-Brateman and Wynne made clear is that embracing the LGBTQ community is ongoing, that language, knowledge, groups, and support go beyond the signage of a bathroom, beyond that of raising a flag. “Due to discrimination not many of our LGBTQ people made it through their career and are still working part-time.” She shares that this group of older LGBTQ individuals, ranging in age from 52-92, now have a place to speak of their fear of loneliness, illness, and their past.

“All LGBTQ dates we wouldn’t have celebrated historically are dates we follow,” said Wynne. “We want to increase awareness.”

The elders wanted to have a conversation about LGBTQ history with the youth. The group insisted they meet with The Rainbow Table. The elders figured it was important to ensure that, while alive, youth have an understanding of their lineage. Becoming what would be known as the Intergenerational Programming, the elder’s spoke with teens and young adults. To the elders’ surprise, the youths had already acquired a great knowledge of queer American history.

“We are all vulnerable groups in the current social and political environment and through oneness can be stronger against these influences in doing so strengthens the world around us,” Don Cook, a member of Aging with Pride, said, “and hopefully protects all rights to what every human being should have.”

With a desire to open the conversation with parents, Wynne thinks having workshops for parents will broaden expectations of tweens and teenagers. This can be done by giving parents the same training they underwent. It starts with talking and asking questions in order to close the gaps of ignorance. It open a door of possibilities. JFCS wants to open that door to the world and say, “we can help.”

JFCS has worked with The Network and Garden State Equality’s Health and Wellness Coordinator, Bianca Mayes. They work with social work professors from Stockton and Monmouth Universities. And as allies, they understand the importance of visibility and often have LGBTQ guest speakers. Some of which include David Griffith, Director of LGBTQ Elder Initiative, an organization dedicated to the livelihood of older LGBTQ individuals.

“You don’t have to be Jewish to use our services,” Wynne said. The center itself is open to all individuals. JFCS’s LGBTQ programming has been met with much discovery in intersectional identity. Some young adults felt the intersections of Judaism and LGBTQ could never meet, while another group member said he felt Judaism had shunned him until he came to The Rainbow Table. As some individuals are still coming to terms with their intersections, Wynne said she hopes to find more clergy guest speakers to assist in stitching congruence toward these intersections.

Along with Aging with Pride and The Rainbow Table comes Project Rainbow for teens. There are plans for tweens between the sixth and eighth grades, LGBTQ counseling and workshops for parents, domestic violence counseling and training. For more on the services at JFCS of Southern New Jersey call, (856) 424-1333.