Toward a Queerer, Jewier Tomorrow 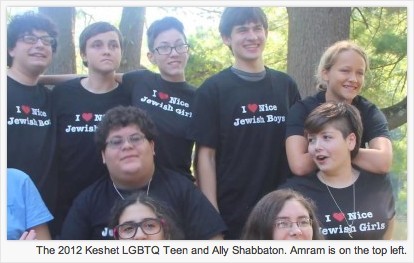 When I was in high school, I had this fantasy where I told myself that I would come out of the closet as soon as I got that one text from a friend asking if they could tell me something, and then they would tell me that they are gay.

That fantasy was never realized. Instead, I was the first to come out of the closet.

When I came out, there was no real place for me. I realized this through a series of crude awakenings that made me realize my place was amongst either my (heterosexual) peers or other queer Jews who were far older than I was, and whose experiences with coming out and views on the relationship Judaism and their queer identities were drastically different from my own. These first experiences with LGBTQ community led me to believe that I had to choose either my peers or my (supposed) community.

In some ways, I felt like I was a bad gay: I had it too easy, and my experiences were not in line with the norm of an older generation. I lost my Jewish community at home (although, to be fair, the fact that I attended a co-educational high school and was a token liberal voice amongst my peers at home was far more heinous a crime), but I was not rejected by my family or most of my peers. I had it relatively easy while I was coming out: about half of my friends had already expected it, and the other half soon realized that it all made sense. In terms of coming out, my experiences aligned much more closely with those of my less religious queer friends, who grew up in liberal Jewish communities where being out of the closet wasn’t an issue.

It was with these experiences that I came to the Keshet LGBTQ Teen and Ally Shabbaton at the tail end of my summer as a rising high-school senior. It was not my first time meeting other queer Jewish teens, but it was my first time in a space that was dedicated specifically to queer Jewish teenagers, and the results were transformative. It was the first time that I felt that I didn’t have to choose between my identities: I was respected for my observance, and my age and sexual orientation were normal. I wasn’t judged for being young, for being observant, or for being queer. Ultimately, that is what motivated me to continue being observant, despite feeling completely invisible in Jewish law and abandoned by my community back home. People might have kicked me out of a community using Judaism as their backing, but this community had accepted me using Judaism as their source for support.

The community that we built during those short 48 hours at the first shabbaton stays with me today: many of us still keep in touch, and I continue to cherish the feeling of completeness that it instilled in me. Coming out of the closet is only part of the battle; the other part is finding a community. I came back from the shabbaton with the motivation I needed to be a part of my Jewish community, wherever it might be. Even if I had to try and pick now between a queer- Jewish community and a community of people in my age group, the notion that there could exist spaces where such things didn’t matter — where I wasn’t the token queer or the token teenager (I never seemed to be the token Jew) — gave me the motivation to find a way to perpetuate that community when I returned home.

This weekend, I will be returning to the very same retreat center where that all began; this time, however, I will be a junior staff member for the shabbaton. Instead of having a space created for me, I will, for the first time, be the one helping to create and perpetuate the community that is so special to me.

Coming into the first shabbaton, I was somewhat shy when it came to talking about my sexuality. I was fresh out of the closet and had just published my first article in the Huffington Post, wherein I publicly came out of the closet, but there were still times and places where I did not feel comfortable bringing up issues surrounding sexuality to peers whom I felt would either not understand or think less of me because of my sexual orientation.

Coming out of the first shabbaton, I was able to fully articulate the discomfort that I felt in different communities, was given a taste of the community that I could help build, and began to articulate a vision for the broader Jewish community, one which is safer and more openly welcoming to queer Jews.

No one should have to make the same deal with themselves as I did As a shabbaton staff member, it is now my mission to ensure that other young Jews,find acceptance by coming out of the closet. By giving other queer Jewish teens a religious home, I can begin giving back to the community that gave me one when I needed it most.