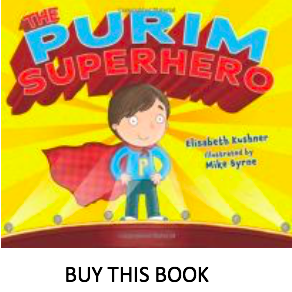 This winner of a 2011 children’s book contest sponsored by Keshet, an advocacy group for GLBT Jews, tells the story of Nate, who wants to dress up as an alien for Purim when all  his male friends are going as superheroes. Can Nate avoid feeling sidelined (“He thought about being the only boy who wouldn’t be a superhero”), while still following his heart—a core value of both the Purim story and his two fathers, Abba and Daddy (“You know,” says Abba, “not all boys have to be the same thing”)? Debut author Kushner can be wordy and overly earnest (an ironic effect, since Purim is basically the Jewish Mardi Gras). But she never overplays the relationship of Nate’s own family to the story, allowing her hero to own hisstruggle fully and devise a solution that offers membership in something bigger while still defining that membership on his own terms. Byrne’s cheery cartooned scenes and wide-eyed characters reinforce the story’s benevolent perspective, but offer few surprises or opportunities for even a small chuckle. Ages 4–9. (Mar.)