Yesterday we hosted Elisabeth Kushner, a Vancouver, BC librarian and author who recently published her first picture book, The Purim Superhero. In three separate sessions, she met with kindergarten and first grade, second and third grades, and fourth grade.

Elisabeth taught the students a Purim song (accompanied on the ukulele!), showed them the storyboard she’d blocked out as she planned her book, read from her first draft and let them compare and contrast, described how publishers coordinate the work of authors and illustrators, explained what a long road it is from bright idea to published book, etc. 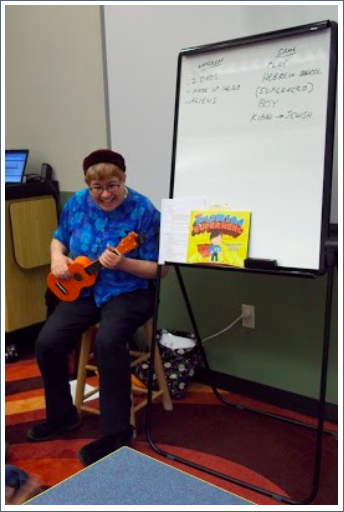 To prepare for her visit, during library classes we read The Story of Esther by Eric Kimmel (which explains why Jews celebrate Purim) and Purim by Carmen Bredeson (which explains how the holiday is celebrated). Familiarity with the background helped them better understand this charming story about Nate, who wants to dress up as an alien for Purim, and Max, his friend at Hebrew School who tells him he “has” to be a superhero like all the other boys. Nate’s dads help him learn from the story of Esther how to be courageous and true to yourself in the face of outside pressure. (You’ll have to read the book to find out Nate’s clever compromise solution!)

I particularly enjoyed hearing the students’ comments; many of them had fascinating and surprising ideas about the various characters. For example, William commented that perhaps Max was showing caring for his friend, worried that he might feel left out as the only boy who wasn’t dressed as a superhero. This was a kind and original insight into Max’s behavior that had not occurred to me. Mira suggested that perhaps it was Max who was afraid of being the only one dressed differently, hence his desire to get all the other boys to be superheroes.

This deeply thoughtful theory about Max’s possible motivations was another one I hadn’t considered!

It all goes to show much richness is hiding within the 32 slim pages of a picture book when you share it with a group of eager children! Happy Purim to all those who celebrate!