The freaks of J Street

I came to the J Street Conference looking for allies. As a queer Jew who is sternly critical of Israel, but still a staunch Zionist, I was looking forward to meeting some like-minded folks. Folks who can’t help but discuss privilege, minorities, and oppression. Folks who are obsessed with identity politics. Folks who face the annoying problem that inevitably comes when they can’t seem to leave their education at school, branded by their families as the one who always talks “politics.” I was looking for the black sheep, the outsiders, the radicals, and the freaks.

Before the conference, a friend of mine listed off some of the speakers she thought I’d find most engaging. The crème de resistance, she told me, would be Anat Hoffman. Truth be told, it was a fairly good assumption to make: Jewish, feminist, and definitely interested in speaking truth to power, Hoffman certainly represents a step in the right direction for Jewish female leadership.

Regrettably, I was less than impressed. Was I really supposed to be inspired by her stories of arrest? Call me meshugga, but I prefer not to judge an activist’s resume by their number of arrests, felonies, or criminal charges. That kind of talk sounds too much like a version of manarchism, a phenomenon in which male activists prove their stripes by getting arrested for a cause. Aside from being mostly disinterested in symbolic actions, I’m also left wondering… What about the people who can’t risk arrest? Let’s not forget about the single mothers, the elderly, undocumented workers, and other marginalized folks. If risking arrest is the way we show our dedication to a cause, then we’re not going to be a very colorful or diverse crew.

But earlier during the weekend, I blogged about how J Street is an exercise in “letting things go.” So I let go of my dissatisfaction with Hoffman’s lackluster call to action. I woke up bright and early for the “Bringing Women to the Fore and Advancing the Peace Process” session in which Rachel Levine and three other feminists gave a report-back on their trip to Israel. The trip brought five women from US Congress to Israel to meet with Israeli and Palestinian business people, lay leaders, citizens, and activists. The goal of their trip was to see how the conflict would be discussed if the participants were all women. 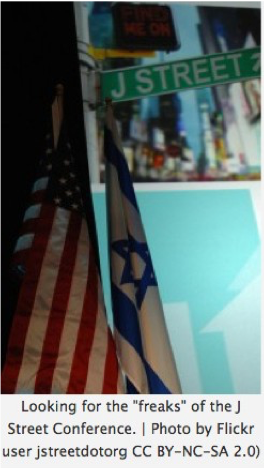 Again, I was disappointed. Their words fell flat when I asked them to what extent did intersectionality play a role in the “feminist manifesto” they created prior to the trip. They brushed off the question as a generational issue and a Second-wave feminist reprimanded me for using overly-academic jargon. Needless to say, this crowd did not want to discuss “radical politics.” Where were my freaks?

After grinding my molars to smithereens, I took a couple of deep breaths and joined the “LGBT Issues & Israel: Pinkwashing or Legitimate Advocacy?” session. It didn’t take long. As soon as Idit Klein opened the session, I knew I’d found my freaks. The three panelists had me sitting on the edge of my seat, hungrily eating their words like sufganiyot during Pesach. I couldn’t contain myself.

Amichai Lau Lavie’s two anecdotes got the analytical ball rolling. He told us how he was perceived as a bad Jew when he wouldn’t attend an Israel advocacy event because they wouldn’t accept J Street. But then he was bad gay when he allowed his son to wave Israeli flags at a Gay Pride Parade. Message received. Progressive Jewishness and Jewish queerness are not yet commensurable.

But Jay Michaelson was the hero of the panel, maybe even of the entire conference. He first acknowledged that the panel was skewed because it didn’t include a hard-left perspective (or a non-white male perspective, for that matter). He then argued that if there is pinkwashing in hasbara, then there is also techwashing and greenwashing. He was also the first to mention intersectionality, explaining how for some folks, the occupation isn’t just a facet of Israel, it IS Israel. “It’s not a very sophisticated lens,” he said. “It’s a wild oversimplification.”  And he left us with the mind bomb, “When you go through a checkpoint, your sexuality doesn’t matter.” The audience took  a moment to react before applauding as they chewed on the sentence.

I was thrilled. Perhaps it’s not about letting things go. Perhaps it’s about storing your analytical weapons in your cranial holster and being ready to whip ‘em out when the time is right. I suppose I shouldn’t be surprised that I finally found my freaks at the LGBT panel. After all, who better to discuss power, privilege, and accountability than a couple of progressive feygeleh? So to the leaders and staff of J Street, I’d like to offer the following advice for next year’s conference: Don’t be afraid to invite the freaks. They just might know a thing or two.