Stuart Milk stood before an estimated 50 LGBT Jewish activists and talked about his uncle’s activism and Jewish philosophy in Berkeley last week at the LGBT Jewish Movement Building conference.

All told, nearly 100 queer and straight allied Jewish movement leaders came together for the first time to harness the power of the emerging movement at the conference, which took place June 28-29 at the Center for Lesbian and Gay Studies in Religion and Ministry on the Pacific School of Religion campus.

“He led from his humanity,” said Jay Michaelson, executive di- rector of Nehirim, one of the conference organizers, referring to Harvey Milk. Michaelson was inspired by Stuart Milk’s speech derived from the “call of the prophet to do justice” in his Jewish roots. 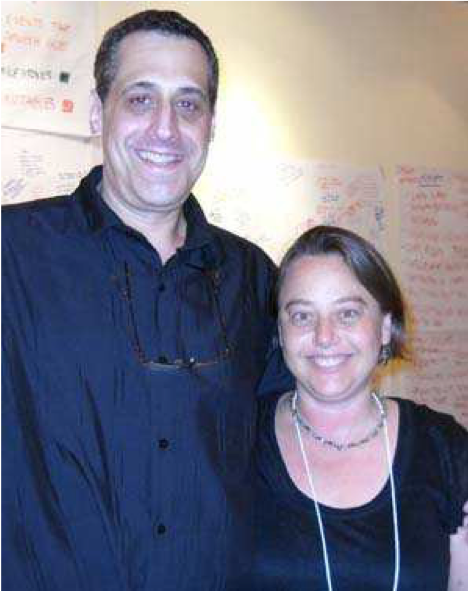 “It was really inspiring to me to hear from Stuart Milk [about the role of] what’s now called prophetic Judaism played in Harvey’s life,” he said.

In recent years, Stuart Milk has raised his profile carrying on his late uncle’s legacy. In 2009, he accepted the Presidential Medal of Freedom, which was awarded posthumously to his uncle and founded the Harvey B. Milk Foundation to inspire hope and equality around the world. That is a goal he’s had since 1978 when he was 17 years old, the year Harvey Milk was assassinated along with then-Mayor George Moscone at City Hall.

While Stuart Milk wants to do the “type of service” that his uncle did, as he told a rabbi in his youth, his goal is more humble. He said he simply “would like to leave the world with more freedom than we have today.”

“Harvey represents freedom to an entire world because there are LGBT people all over the world,” said Stuart Milk, who was inspired by South African bishop and activist Desmond Tutu, who also received the Presiden- tial Medal of Freedom last year. It was at the White House ceremony that Tutu told Stuart Milk that he “must do more” for Harvey Milk’s legacy.

Harvey Milk was ahead of his time. An activist long before he became a gay activist turned gay politician, Harvey Milk stood up against the Reserve Officer Training Corps’ presence on college campuses and spoke out about being different. As one of four Jews at a mostly Christian school while attending teacher’s college in Albany, New York in the 1950s, he wrote two columns for the campus paper, where he expressed his views about teaching peace, said Stuart Milk.

Long before marriage equality, “Don’t Ask, Don’t Tell,” the Employment Non-Discrimination Act, and many of the modern issues of the LGBT movement were in vogue and hotly debated, Harvey Milk pondered them, Stuart Milk said, speaking about the recordings his uncle left behind.

An audience member asked Stuart Milk what Harvey Milk would think about the LGBT movement today. Stu- art Milk responded that his uncle would be thrilled to see so many LGBT elected officials, but he would be devastated that there wasn’t a comprehensive non-discrimination law in place. Stuart Milk added that Harvey Milk would support the repeal of DADT based on the premise that it requires people to lie about who they are and he would support marriage equality due to the number of rights denied same-sex couples.

Authenticity and equality were key components to Harvey Milk’s activist philosophy, politics, and vision de- rived from his faith and heritage and influenced by World War II, Milk explained.

Harvey Milk was not the typical synagogue-goer, as Rabbi Allen Bennett, the first rabbi to serve at Congrega- tion Sha’ar Zahav in the Castro and who conducted his memorial service, pointed out during his introduction of Stuart Milk. Synagogue to Harvey Milk was a place to “prey” on members for votes, Bennett said.

But Harvey Milk also understood lessons from the Torah, lessons that he shared with his young gay nephew without ever once mentioning his queerness, Stuart Milk said.

“Harvey was one of the first people who taught me about a broader meaning of religious context,” he said.

Harvey Milk would spend nights in the kitchen of Stuart Milk’s parents’ home in Long Island, New York, dis- cussing the Torah and his activist philosophy, Stuart Milk recalled. The story of David and Goliath, where a simple man wins a battle against a fierce warrior, was one of the most significant conversations Stuart Milk had with his uncle, he said.

That night Harvey Milk spoke about courage in the face of adversity and the potential cost for standing up for what you believe in, Stuart Milk told the audience. Harvey Milk was David to him because his uncle pro- claimed his authenticity against a society that believed homosexuality was a disease and was illegal. He spoke to rooms filled with people who hated him – gay and straight – and who actively campaigned against him.

Against all odds he ran for public office and finally won, Stuart Milk said.

“Harvey actually had, to me, the courage of David, because what he was up against was the Goliath of a soci- ety that said that you do not proclaim who you are authentically if you are a lesbian, a gay, a bisexual, or a transgender person,” Stuart Milk said, adding his uncle was “always trying to convince me who I was was per- fect; that who I was from the time that I was very young was exactly who I needed to be.”

Harvey Milk could never understand “how a community and a country could turn on members of its own com- munity and country,” Stuart Milk said, recalling a wound his uncle carried from WWII, especially a community that was gaining rights and was being celebrated in pre-Nazi Germany: the LGBT community.

The Jewish community is the community that can lead other communities to embrace equality, Stuart Milk be- lieves.

“If any community can feel the empathy of a community not being celebrated it is the Jewish faith community,” said Stuart Milk, who pointed out the centuries of outsiderness the Jewish people experienced that caused some individuals to lose their “authenticity.” This fact allows the Jewish community the ability to “lead in inclusion and celebration of all [its] parts.”

“It’s a natural and we can help lead the way in other faith communities by being fully inclusive and celebrating all of our members and that does not diminish or challenge your own personal belief and faith,” he said.

Harvey Milk wanted people to join the LGBT community and invite others to join “in celebrating ourselves,” Stuart Milk said. “I tolerate mosquitoes so I can be outside but our LGBT community are the ladybugs and but- terflies of the world, we are a gift to the world. We do not need to be tolerated.”

Last week’s meeting was co-produced by Keshet, Jewish Mosaic: the National Center for Sexual and Gender Di- versity, and Nehirim to open a dialogue with queer Jewish leaders who have emerged as a “flowering of queer Jewish organizational life,” said Idit Klein, executive director of Keshet.

Jewish Mosaic recently merged with Keshet and has offices in San Francisco, Denver, and Boston.

The conference was significant because up to this point many LGBT Jewish leaders and organizations operated on a reactionary basis to community needs, said Nehirim’s Michaelson. An irony that didn’t escape organizers is the community that is the “most progressive” on LGBT equality and issues “speaks with the least unified voice on these issues,” said Michaelson.

“We are only now at the stage when we have the luxury of thinking strategically and together as a movement,” Michaelson added. “This is the first time where there is a concerted effort to think as a movement not as an inde- pendent freelance people doing our own projects.”

Klein agreed, believing the conference was “potentially a watershed moment in queer Jewish history.” Confer- ence attendees ranged from Zionist and Orthodox Jews to reform and liberal organizations and foundations.

“It was a good start to what needs to be an ongoing conversation to help LGBT organizations not only survive but really thrive,” said Randall Miller, senior program officer of the Evelyn and Walter Haas Jr. Fund. “Funding Jewish LGBT organizations is a smart way to be an ally to the larger LGBT movement.”

Pro-Palestinian protesters were absent from the conference due to its intentional low profile, said Klein. While issues between Israel and Palestine are important and something the queer Jewish community cares about and will discuss in the future, said Klein, it wasn’t included on the itinerary, which was focused on the emerging LGBT Jewish movement.