A Shabbaton, an extended Shabbat retreat weekend, offers a time for reflection and rejuvenation. At a recent Shabbaton for 70 LGBTQ and ally teens, supported by UJA-Federation of New York, the Shabbat event provided an additional meaningful experience: the chance to feel truly comfortable and accepted.

“I had little understanding of how being gay and Jewish fit together,” said Emily, a 17-year-old teen from Canada who attended the Shabbaton. “I searched up ‘LGBT and Jews’ in Google and stumbled upon this. I knew I had to go.”

The Shabbaton, organized by Keshet and Hazon four times since 2012, was held in early March for teens across the country and Canada at the Isabella Freedman Jewish Retreat Center in Connecticut. 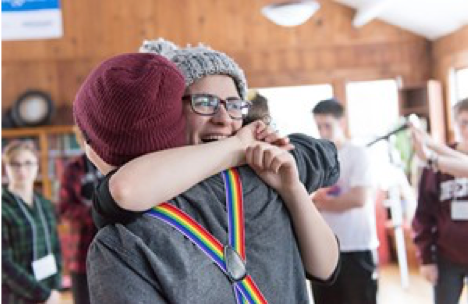 “Hazon’s mission is to create a healthier, more sustainable world and communities where everyone feels included, welcome, and safe,” said David Weisberg, CEO of Hazon, a UJA-Federation beneficiary agency. “We found LGBTQ teens were underserved and felt that we could provide a safe space for this kind of programming. Keshet created a Shabbaton where the teens feel safe and open.”

For Amram Altzman, a sophomore in college who attended the first LGBTQ Shabbaton as a teen, it was a time when he didn’t feel like one part of himself was relegated to the side. “It was the first time when I could be queer and Jewish in the same place and understand what it means when these things interact,” Altzman said. “It was a space where queer Jewish high school students could meet each other and give each other support, friendship, and community.”

A Newfound Sense of Acceptance 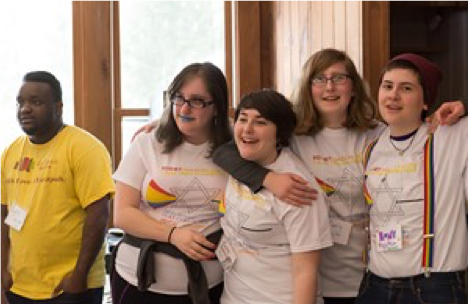 Altzman said the Shabbaton gave him a sense of acceptance he hadn’t felt before. He attended the recent Shabbaton as a junior staff member as a way to give back and help create community for other teens.

The Shabbaton made this possible through sharing personal stories, studying texts about LGBTQ issues, hearing from transgender teens about the challenges they face, and reflecting on LGBTQ concerns in Jewish life.

“I realized how free I had become in spirit and how trapped inside myself I used to be. For the first time I felt truly comfortable with my whole self,” Emily said. “The Shabbaton was a place to connect with others through our LGBTQ and Jewish identity, a place where people genuinely care, a place to laugh, cry, dance, and be silly while feeling accepted for all that you are.”

The Shabbaton ended with the 70 teens gathered together in a circle singing clear and strong, “Courage my friend, you do not walk alone, we will walk with you and sing your spirit home.”

“It was an ending and yet also a beginning,” Emily said. “A beginning of starting to live with more truth.”