Officials at Gratz College hoped that screening a film about a teen girl’s struggle to reconcile her homosexuality with Judaism, while also challenging her high school to become a more welcoming place, might prompt some discussion and send a message that the Melrose Park campus is an open environment for Jews of diverse backgrounds.

Five years ago, Shulamit Izen — at the time a senior at the Gann Academy: The New Jewish High School of Greater Boston, and soon to be a student at the Reconstructionist Rabbinical College in Wyncote — set out to create a gay-straight alliance in her school to help foster an environment where those who were “out” would feel more accepted.

Her activism created some controversy, including a backlash from a number of Orthodox students and parents, and ambivalence on the part of the school’s administration and board. Izen’s and the community’s struggle was captured in an hourlong documentary titled “Hineini.”

The Hebrew word Hineini literally means “Here I am,” and is an allusion to several key events depicted in the Torah. In Genesis, Abraham uses the word as a reply when God calls him before he was set to sacrifice Isaac. Moses also used it during his interactions with the burning bush.

The 2005 film was directed by Irena Fayngold and produced by Keshet — a Boston-based group that works for the full inclusion in Jewish life of gay, lesbian, bisexual and transgender Jews.

Izen, now a senior at Brown University, did not attend the Gratz event, and was unavailable for an interview. According to Keshet, she has been to a number of screenings — there have been more than 100 — but was currently swamped with schoolwork.

Several months ago, faculty at Gratz College and at the Jewish Community High School at Gratz had seen an excerpt of the film, and decided that they needed to show it on campus. They held two screenings — one for high school students only. That was closed even to parents in the hopes that young people would speak freely. The other event, held the night before, March 17, was open to the entire community; roughly 50 people attended. 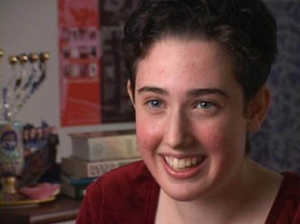 Following both screenings, Andrea Jacobs, director of education at Keshet, facilitated discussion, asking the audience to comment on those parts of the film that moved them, and those that proved troubling.

Several people commented on the interviews with teachers who came out publicly, and were struck by how hard — even today — it is to do so, and how fearful the educators were for their jobs. But according to Jacobs, doing so made a big difference in the lives of students struggling with their sexual orientation.

“For a Jewish kid growing up to have a gay rabbi, a gay teacher, a gay camp counselor — to see that it’s possible to be out and to be in a Jewish community — is a really important thing,” she said.

Another woman was troubled by a remark made in the film by an Orthodox student who said that he had learned to relate to gay classmates in the same way that he related to Reform ones.

Jacobs replied that while the remark might come off badly, it actually represented a great deal of growth on the part of the individual. He might not agree with how a Reform student practices Judaism, yet he still doesn’t shun that person.

Gratz staffers seemed pleased with the outcome of the event.

“Just by the fact that we are showing this, we are getting the message across about the inclusiveness that we want Gratz to represent,” said Ari Goldberg, director of the community high school. He added that there is no gay-student group in the high school, though he wouldn’t be averse to one.

Melanie Birger-Bray, a gay, 28-year-old alum of Gratz’s high school program, said that “they need to be showing this in high schools and any religious school. It reminds me that one person can really make a difference.”