If you see a tie-dyed chuppah bobbing its way up Market Street on June 28, chances are you’ve spotted a group of teens from URJ Camp Newman marching in the San Francisco Pride Parade.

As they have for 10 consecutive years now, teens from the Santa Rosa–based camp’s Avodah program for high school juniors will be part of the parade.

Approximately 40 are expected to participate, carrying not only a colorful wedding canopy but also handmade signs while rocking out to Israeli music. It’s quite a to-do: Every year since 2006, the Camp Newman group has won ribbons for “best street act” or “most enthusiasm.”

“There are no words” to describe the experience, said Rachel Katz, 20, a former camper who marched in 2011. “It’s an experience everyone should have. It forces you to be open-minded. The theme of acceptance is very emphasized at camp, [so] it’s great that we’re able to take what we learn … into that situation.” 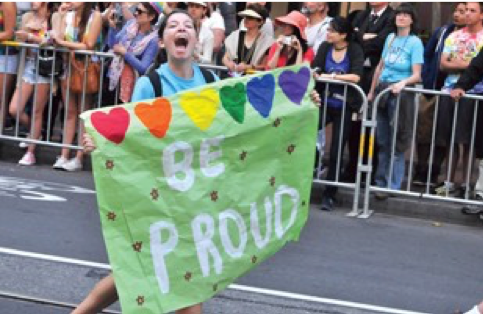 Ari Vared, a director at Camp Newman, said marching in the Pride Parade is the perfect complement to the service-learning focus of the Avodah program.

“Camp Newman has always been very social justice focused, which is centered in Reform Jewish values,” said Vared, the camp’s director of advancement and new initiatives. “So being a part of this contingent and standing with pride with the Jewish community — it’s a statement about acceptance and inclusion ingrained into the fabric of us as an organization.”

Before the annual parade, campers participate in “Proud to Be Me,” a program in which they discuss what parts of themselves they should take pride in rather than “keep in the closet.”

“As Jews there are plenty of times when it’s not really easy for us to speak with pride about who we are,” Vared said. “It’s about understanding the history of why a parade like this exists and why it relates to us as Jews.”

Along with Camp Newman, other local Jewish groups will be marching in the 45th annual parade on June 28.

After a successful debut in 2014, Reform synagogues in the Greater Bay Area once again will be marching together under a Union for Reform Judaism banner. This year, at least 15 synagogues — including biggies such as Congregation Emanu-El in San Francisco, Temple Sinai in Oakland and Temple Isaiah in Lafayette — are expected to participate.

The group will meet on Spear Street between Mission and Howard streets. For details and registration information, visit http://www.urj.org/west/SFPride.

Meanwhile, Keshet and American Jewish World Service will join forces for the second year in a row, marching alongside the JCC of San Francisco. Keshet, a national nonprofit that works for full LGBT equality and inclusion in Jewish life and beyond, will provide bagels, for both marchers and spectators, at 10 a.m. — a half-hour after the contingent gathers at Market and Beale streets and a half-hour before the parade begins. For more details, visit http://www.keshetonline.org.

Congregation Sha’ar Zahav in San Francisco will host its 11th annual Pride Freedom Seder, where people will read from the congregation’s “Pride Haggadah.” The seder will be followed by a Pride- themed Shabbat service and a vegetarian potluck dinner.

The JCC of San Francisco will have snacks, music and a signature cocktail as a part of “Pride Shabbat Happy Hour.”

Congregation Beth El in Berkeley is hosting a Pride Shabbat followed by a Pride-B-Q, and beforehand, at its first Chardonnay Shabbat of the season, people will be invited to make a l’chaim for pride.

Keshet is teaming up with Glitter Kehilla to host a Shabbat picnic in San Francisco’s Dolores Parkan hour before the 12th annual Trans March. Glitter Kehilla is a group of people in their 20s and 30s at the East Bay’s Kehilla Community Synagogue.