Review of Hineini: Coming Out in Jewish High School and Trembling Before G-d

The beginning of reconciliation for these two seemingly separate worlds is highlighted in the independent documentaries Trembling Before G-d and Hineini: Coming Out in Jewish High School. Both films tackle the inner conflict of Jews who desperately want to be openly LGBT and religious, without being shunned.

The powerful Trembling Before G-d interviews an international group of adults struggling to come to terms with their identities. The film includes interviews with both rabbis and therapists, speaking from dramatically opposing viewpoints about being both gay and Jewish. The teenage perspective is captured in the inspiring Hineini: Coming Out in Jewish High School, which follows the struggles of 14-year old Shulamit Izen coming out as a lesbian.

The current state of religious Judaism in the USA is roughly divided into 5 categories, (with many variations) with wildly differing attitudes towards homosexuality. These include Orthodox, Modern Orthodox, Conservative, Reform and Reconstructionist.

The Orthodox is the most severely homophobic, with the most literal translation of Leviticus 18:22, which states “Thou shalt not lie with mankind, as with womankind: it is abomination”. The Reform, which is the largest group in the USA, and the Reconstructionists are the most liberal and accepting, holding the belief that “all Jews are religiously equal regardless of sexual orientation”.

In Hineini: Coming Out in Jewish High School, directed by Irena Fayngold in 2005, Rabbi Lehmann at the New Jewish High School in Boston has a vision of integrating the different branches of Judaism. He wants the young, pluralistic, Jewish community to ”transform by living in the tension of our differences”.

Yet, he seems to be caught off-guard by Shulamit Izen, a charismatic lesbian student, who forces him to confront the potentially divisive attitudes toward being Gay and Jewish. 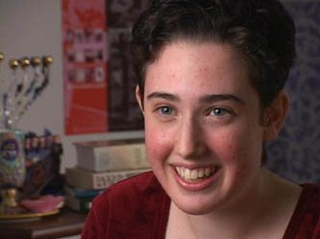 GLBT Orthodox Jews are often faced with a horrible choice: having to decide between being openly gay and potentially losing their family and religion, or hiding in a heterosexual lifestyle.

In the narrative, Shulamit comes out to her classmates and Rabbi Lehman, and it is heartbreaking to see her confusion over the negative reactions. Naively, she assumes Rabbi Lehmann will give total approval. Instead he tells her ”Judaism, over several thousands of years, has developed a negative view on homosexuality”. One student refuses to spend the night at a sleepover party (with Shulamit) because ”she did not want Shulamit to see her getting undressed.”

Shulamit refuses to let go of her quest to reconcile being Jewish and Gay and “holy”. Through her intense quest to find a Jewish community “that does not make me internalize homophobia”, she finds support at Keshet (a Boston based Jewish/gay support network) and within her school. With their backing she fights to create a Gay-Straight Alliance.

Shulamit creates a domino effect of change. Rabbi Lehmann admits he is still struggling with his attitude towards homosexuality and Judaism. Some previously closeted teachers must decide if, in support of the GSA, they are going to come out publicly to the entire school.

Director Irena Fayngold was forced to create this film completely through narrative interviews because she was banned from filming in the school. Yet the power of Shulamit’s conviction keeps the film compelling and ultimately inspiring. Hineini: Coming Out in Jewish High School is important for all generations searching for their religious and sexual identity.

In contrast, Trembling Before G-d, directed by Sandy Simcha DuBowski in 2001, arouses a sense of claustrophobia. DuBowski forces us to experience the constrictions of the struggling orthodox GLBT Jews who are the subject of his film.

The level of secrecy around their queer identity varies among the different people depicted in the film. These include a married Orthodox woman in Jerusalem who is so closeted that we know her only through her masked profile (she is filmed in the dark) and her distorted voice.

A lesbian Orthodox couple “Malkah” and “Leah”, who were high school sweethearts in Brooklyn, allow the camera to film their bodies but not their faces. It is a painful experience for the viewer to watch this disembodied pair cooking and praying, knowing that they are terrified of being fully seen.

Yet some are willing to be completely visible. Live-wire Mark from London is torn between ecstatic dancing in Yeshivas (a seminary for unmarried Orthodox Jewish men) and dressing up as a queen at Jerusalem Pride. Charismatic Israel flails passionately with his hands, as he speaks of going through electro-shock therapy as a young boy and hunger for reconciliation with his homophobic father.

All of them bare their souls, revealing what being gay and religious has cost them. Some, like Israel, vehemently believe it is impossible to be Orthodox and queer. Others, like the first openly gay orthodox Rabbi Steven Greenburg, believe the two lifestyles can be reconciled.

While the question of reconciliation is not answered in Trembling Before G-d, it is an important and groundbreaking film. The movie gives rise to intense empathy for these Jews who resist giving up their faith.

Perhaps the largest testament to the power of the film is in the DVD special feature Trembling On the Road which documents the aftermath of the film across the world. In it we learn that Trembling Before G-d has started a historically unprecedented worldwide movement. The film has become a tool in sparking dialogue and educating Orthodox Jews and other faiths across the world.

Being an Orthodox Jew and a LGBT person can bring a deep level of shame that is compounded by religious and societal homophobia. This has been a subject that historically has been shut away and silenced. Yet by speaking out, the individuals in the two movies have created hope for those suffering in silence.

Both movies point out there is hope in unifying being highly religious and gay, even if it is extremely difficult and laden with sacrifices. Some Orthodox LGBT Jews have created their own support groups, while others try to penetrate the current Orthodoxy. A movement has now begun for those who need to be religious and gay without the loss of an entire community.