ORLANDO, Florida (AP) — When Rabbi Elliot Kukla became the first out transgender rabbi ordained in the Reform Jewish movement almost a decade ago, he would get questions from other rabbis along the lines of “There’s a transgender congregant coming to services. What should I do?” He would tell the other rabbis to greet them with, “Shabbat shalom,” the traditional welcome for anybody.

Now, other rabbis ask more sophisticated questions and lack the discomfort of the earlier ones: Is there a ritual for a trans man who is converting to Judaism but doesn’t have a penis for a traditional circumcision? How can we celebrate a 12-year-old trans girl’s name change at her Bat Mitzvah? 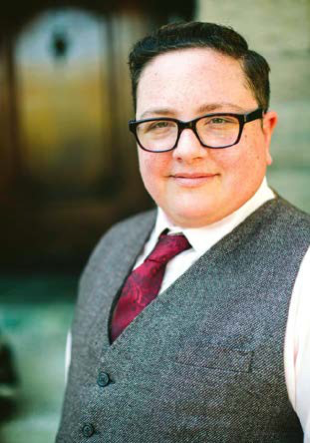 Recognizing this, the body that represents synagogues in the Reform Jewish movement — American Judaism’s largest branch — is poised Thursday to pass the most far-reaching resolution on transgender rights of any major religious organization. The resolution under consideration at the movement’s biennial conference in Orlando affirms the equality of transgender people and welcomes them into congregations, camps and other Reform Jewish institutions.

Other religious bodies, such as the Episcopal Church, the United Church of Christ, the Unitarian Universalist Association and the Reconstructionist Rabbinical Association, previously approved resolutions affirming equality for transgender and non-gender-conforming people. None, however, go as far as the one offered by the Union for Reform Judaism, said Michael Toumayan, manager of the Religion and Faith Program at the Humans Rights Campaign, the civil rights group for gays, lesbians, bisexuals and transgender people.

While the resolution is coming in a year when transgender issues have never been more visible, thanks to Caitlyn Jenner and others, Union for Reform Judaism officials say it has been in the works for some time and is part of a tradition of inclusion that dates back decades. The Union of Reform Judaism in 1977 passed a resolution affirming the rights of gays and lesbians.

“Within our congregations, this is a natural evolution rather than some wholesale departure or new direction,” said Barbara Weinstein, director of the Commission on Social Action of Reform Judaism. “This is very much of a piece of what it means to be a Reform Jew.”

The Union for Reform Judaism is offering a one-page pamphlet to help congregations adopt the goals of the resolution. It suggests dividing kids by birth month rather than gender in youth programming, avoiding using gender titles such as “Mr.” or “Mrs.” on nametags or in emails and asking congregants by which pronouns they would prefer to be called.

“Of course the resolution doesn’t require anything, but for a community that takes it seriously and is willing to really invest a strong effort and resources toward implementation, then I think it could make a difference,” said Rabbi Reuben Zellman, who became the first out transgender rabbinic student in the Reform movement a dozen years ago. “But like any resolution, it won’t be impactful unless it’s backed up with serious efforts of implementation.”

More than 6 million Jews live in the United States, less than 2 percent of the nation’s population, and more than a third of all U.S. Jews identify with the Reform movement, according to a 2013 survey by the Pew Research Center. Less than a fifth of U.S. Jews identify with Conservative Judaism — sort of a middle-ground ideologically between the more liberal Reform movement and traditional Orthodox Judaism. Orthodox Jews account for 10 percent of U.S. Jews, and Reconstructionist and other smaller movements make up 6 percent.

Given Reform Judaism’s size, with 1.5 million members in North America, the effect of the resolution will be felt throughout American Judaism and beyond, experts said.

“It has a real impact throughout the entire Jewish community… This happening in the Reform movementhas a bigger impact on the mainstream Jewish community, just in terms of sheer scope,” said CatherineBell, national program director for Keshet, a grassroots group that works for gay and transgender rightsin Jewish life. “I hope this paves the way for other denominations to also make similar steps.”