Jordan Dashow was a student at Tufts University, near Boston, when he decided to come out via Facebook. 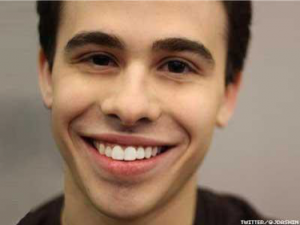 “My heart is racing. I am staring at my computer screen, full of white and blue pixels, as my hand hovers over my laptop’s touchpad. It feels like the last few weeks have all been leading up to this moment. Yet, I have no idea if people will even notice this moment, if they’ll even talk about it. I hesitate, yet I make my decision. I click the appropriate button to save the changes. My Facebook now lists me as interested in men,” he wrote for Keshet, a pro-gay Jewish organization.

But even after that initial revelation, Dashow wondered if he could reconcile his religious identity with his homosexuality.

“Coming to Tufts Hillel changed that thought process. At Tufts Hillel, it became clear thatnot only were those two identities not in conflict but they could even complement each other,” Dashow, an intern at Keshet, wrote to commemorate Pride month.