Reaching Out to the LGBT and Jewish Communities

Matt Nosanchuk recently left his role as White House Jewish Liaison. During his time in the Obama administration, he initially worked on LGBT issues in the Department of Justice before coordinating efforts to reach out to the Jewish community. 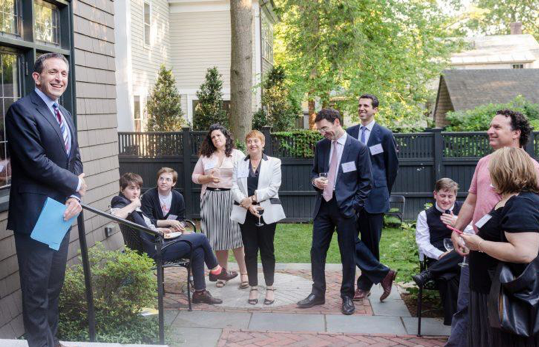 Matt Nosanchuk was recently in Cambridge at the invitation of Keshet to speak on a range of issues he worked on during his time in the Obama administration. This past April, Nosanchuk’s nearly three-year tenure as the associate director of the White House Office of Public Engagement for Jewish Outreach ended. The wordy title is better known as the “White House Jewish Liaison.” In that job, Nosanchuk’s duties included communicating concerns from the Jewish community to the Obama administration on everything from the Iran nuclear deal to who received a coveted invitation to the annual White House Hanukkah party.

Nosanchuk, 51, joined the Obama administration in 2009 as senior counsel to the assistant attorney general before becoming the Department of Justice’s first point person on LGBT issues. At a recent event at a private home in Cambridge, he told his audience that the two pivotal roles “go to the very core of my identity as a gay man and as a Jew. I think of it as the fringes of a tallit with the blue thread. The fringes are wrapped together and the blue thread is this rare, distinguished thread of a particular dye. For me, my experience was like these threads, or fringes. My gay and Jewish identity was wrapped and intertwined together.”

Early in his career, Nosanchuk worked on civil rights and civil liberties issues as a fellow in the ACLU’s AIDS civil rights project in the 1990s. “I was still straight-identified and finally came out in my late 30s,” he said. He continued his work in LGBT civil rights issues as he joined the Obama campaign in 2008. “When President Obama declared his candidacy for president, I became one of the leaders in the LGBT policy committee on the campaign and ended up helping to shape the candidate’s platform on LGBT issues,” he said. Nosanchuk went on to observe that during the Obama administration there was significant progress on issues such as the military’s “Don’t Ask, Don’t Tell” policy, repealing the Defense of Marriage Act, the passage of the Hate Crimes Prevention Act, as well as the passage of laws prohibiting LGBT discrimination in employment.

The capstone of Nosanchuk’s longtime work on behalf of LGBT rights was realized in June 2015 when the Supreme Court decided in favor of marriage equality in the Obergefell v. Hodges case. By then Nosanchuk was working on Jewish outreach in the White House, but he was at the Supreme Court the morning of the historic decision. “When I think of a day at the White House that stands out in my mind, it is that day,” he said. “There was an incredible feeling in the courtroom, an incredible affirmation for LGBT people to have their relationships recognized with dignity. I was also in the Rose Garden when the president talked about the impact [of the Supreme Court decision] and justice coming down like a thunderbolt.” The following Shabbat, Nosanchuk was the speaker at an LGBT congregation in Washington, D.C., for Pride Shabbat. He jettisoned his prepared speech and spoke from the heart. “My Jewish and gay identities fused again,” he noted. After his talk, he walked with the congregation to the White House, joining thousand of others to view it lit in the colors of the rainbow.

Among Nosanchuk’s more challenging duties was to lead the outreach effort to the Jewish community during the talks over the Iran nuclear deal. The Netanyahu government, as well as the American Israel Public Affairs Committee (AIPAC), adamantly opposed the deal. “It was the most intensive period of my work life,” Nosanchuk said. He was told, half-jokingly: “My job was to talk to every Jew in America about the deal. And I did talk to a lot of [fellow Jews], and I got the president to talk to Jewish federations and Jewish community relations councils through a webcast that reached more than 15,000 members of the community.”

One of Nosanchuk’s notable achievements during that time was coordinating President Obama’s historic visit to Adas Israel, a Conservative congregation in Washington, D.C. Obama was only the fourth president in history to speak at a synagogue. “He had a resounding reception and talked about his own identification with the values of the Jewish community,” Nosanchuk said.

Nosanchuk has moved on to the State Department, where he works in Secretary Kerry’s Office of Religion and Global Affairs. “We take into account the role that religious dynamics play in foreign policy and diplomacy,” he said. “The office works on a wide array of issues, including advancing LGBT rights— particularly in places where some religions leaders and organizations have played a less-than-helpful role.”

The new job encompasses the very topics—LGBT and Jewish—that bookended Nosanchuk’s time in the Obama administration. “To do work that is so completely related to one’s identity is unique in the government space,” he said. “I feel very privileged and honored to have had this opportunity.”