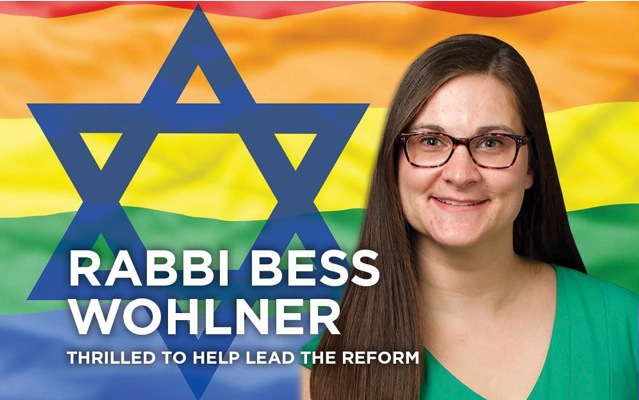 Rabbi Bess Wohlner isn’t a native Memphian, though you’d be hard pressed to make a case against her. I was certain her friendly, frank demeanor and endearing concern for my comfort when we first met were tell-tale signs that I was in good Southern company.

“It takes a rare bird to get my humor,” she laughed. Born and raised in Kansas, Rabbi Bess didn’t move to Memphis until 2015, when she accepted an assistant rabbinical position with Temple Israel, the only Reform synagogue in the city.

With just over a year and a half under her belt, Rabbi Bess has helped facilitate a progressive movement towards LGBTQ inclusion among Temple’s congregation. Beginning with a mitzvah project spearheaded by a gay conversion student, synagogue leadership have embraced LGBTQ inclusion and equality. The mitzvah project culminated in Temple’s recent certification as a safe space for LGBTQ individuals by Keshet, a national Jewish organization that advocates for full inclusion in all aspects of Jewish communities.

To become Keshet approved, an organization must meet certain requirements such as providing unisex or non- gendered bathrooms, using non-gendered language on membership application forms, performing same-sex ceremonies and weddings at the synagogue, and the ability for an LGBTQ congregant to wholly participate in religious services.

In addition, a Keshet organization must be willing to participate in LGBTQ advocacy work. “It’s something I appreciate about the Reform movement, because it comes from prophetic Judaism which calls for speaking out against things that are wrong,” explains Rabbi Bess. For her, anything that singles out an individual based on sexual orientation does not align with Jewish values, plain and simple.

“Anytime someone’s rights are threatened, it’s not a political issue, it’s a moral issue, and we have a religious obligation to speak out in favor of supporting people’s rights.” In addition to her daily rabbinical duties, Rabbi Bess also oversees Temple Israel’s religious school program. “When I took over the religious school, I really wanted our faculty to reflect our congregation.” In that spirit, she’s hired “Jews by choice”, gay staff, and a non-Jew to reflect the full spectrum of individuals who make up Temple Israel’s community.

Not only is Temple Israel expanding LGBTQ inclusivity in their east Memphis synagogue, they have recently made a move to create a touchpoint for Jews living in midtown and downtown through securing space inside Crosstown Concourse. This will enable Temple Israel to serve more of the Memphis Jewish population, as well as facilitate further opportunities to work with Mid-South organizations on social justice initiatives.

“For me, it’s really exciting as a new rabbi,” Wohlner said, “to be a part of a congregation that takes social justice so seriously that they put themselves in the center of doing good in the city with others who want to do good, too.”