Queering the Jewish Holidays: How I Celebrate Hanukkah

It’s almost Hanukkah, which means it’s time for friends, latkes, and stressing out about how to actually spell Hanukkah. (Ch? Just H? Two n’s? Unclear!) Or at least, that’s what my December Jewish Holigay season looks like. I’m a Jewish queer girl living in Portland, OR and let’s just say the Jewish community here is not quite so robust as it was when I lived in Brooklyn. While in New York I often had several different queer Jewish events to attend on any given weekend; here in Portland it feels like I’m constantly trying to rally my sweet (non-Jewish) girlfriend and a small group of enthusiastic Jews together to celebrate Jewish things. Why do I bother? Well, it’s important to me to celebrate the Jewish holidays. I like doing it. It reminds me of traditions I enjoyed as a child with my family, and it reminds me that I like my religion, and it reminds me that history is very long and humans are very resilient.

Also, the food is fucking delicious. I’ve spent the past few years partaking in old family traditions, creating new rituals, and queering the Jewish holigays as much as I can so that I can celebrate them fully and happily each year.

Even though I’m not particularly religious, and actually identify more as a Jewitch than anything else, celebrating the holigays is a meaningful thing I like to do. But I like doing it 100x more now that I’ve added my own special gay flair to the scenario. I’m going to share with you how I personally queer Hanukkah, and how some of my friends do it, and then we’ll hop into the comments so that you can share what your Hanukkah traditions look like, because I think that will be fun and useful for all the Jews around here who love celebrating / want to celebrate but don’t know how / literally forgot it was Hanukkah in a week but sure are probably down to light a menorah, maybe! (Also please feel free to yell at me in all-caps if I’m spelling Hanukkah wrong aka not the way you like to spell it!)

And if you’re stoked about this article, you’ll be pleased to know I’m plotting a few more articles like it over the course of 2018 – we’re going to talk about queering Purim, Passover, and Rosh Hashana/Yom Kippur, too! Maybe we’ll even talk about queering Shabbat!

But for now: The Festival Of Lights.

Okay, maybe it’s cliche, but listen, queer people are into rainbows. It’s just a stereotype we often play into, please just let me have this thing without telling me to stop stereotyping my people. Get yourself a rainbow menorah (I know it’s really a hanukiah but everyone calls it a menorah and I use the terms interchangeably)! Do what my friend Tamar does and arrange the candles in rainbow order. Make a rainbow cake to serve with your latkes. Take Hanukkah and put a rainbow on it! 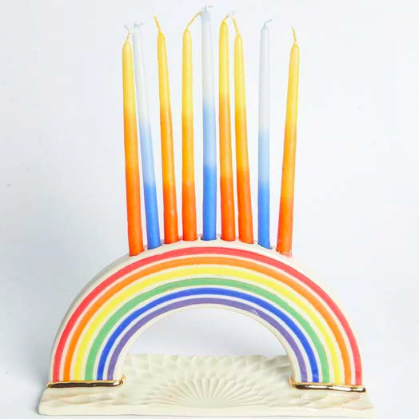 My friend Alex makes these beautiful rainbow menorahs and honestly my current goal in life is to own one. You can achieve that goal too, if you wish — check out Alex’s Etsy store! 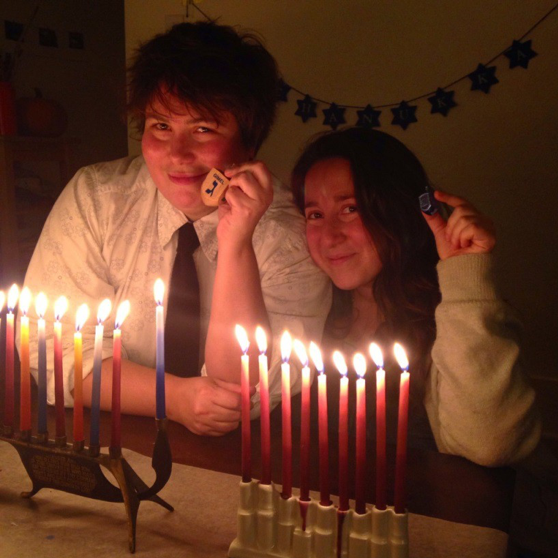 Like I said, my girlfriend is not Jewish, but she is an incredibly curious and appreciative pupil. Alley loves when I explain to her the traditions of Judaism or when I fill her in on the story behind a specific holigay, and I really appreciate that. I have some other friends who also enjoy learning about Judaism, and the act of sharing my culture and religion with folks who don’t know anything about it is really special. It’s also a good excuse for me to dive deeper in my knowledge about Judaism.

Sometimes Alley will ask a question and I’ll have to say, “that’s a great question!”, which is what I say to the toddlers I nanny when I mean, “I’m going to have to Google that!” But it’s cool to have people around who can challenge your own perceptions of what you know about your religion, and it’s an instant refresher course. Other fun things to teach your friends and chosen family are the actual rituals and traditions that go along with each holigay now, in the modern world. My friend Mandy says she always has guests over at least one night of Hanukkah, and she asks if anyone who has never lit the candles would like to light them. She told me: “Very special years have included times where I asked queer friends to do the honor who have lost touch with Judaism, especially via their family, and it helped them feel connected to something they used to hold near.”

If you know anything about me, you know I really value the power of storytelling, which is why I love the approach my friend Doc takes to queering Hanukkah. “Whenever I retell the Hanukkah story, I invoke it as a form of resistance and rebellion to all kinds of forced assimilation,” she told me, as I swooned. “Hanukkah has a lot of meaning to me about what makes Judaism important and what is worth dying for, and in a sense, being a lesbian goes into that: how we choose to live our lives openly, and the miracle of lasting despite everything,” Doc continued. “Hanukkah is about a light that doesn’t go out, even if it should, and that’s a valuable idea for me as both a Jew and a lesbian.” And then,when I thought I couldn’t possibly love Doc anymore, she shared a tradition that I adore and will definitely be incorporating into my queer Hanukkah celebrations of the future: After the retelling of the Hanukkah story, “we all read a story we wrote that year, to commemorate the importance of all stories and their unique qualities.” Damn. I am so into this!

Another beautiful new tradition that a friend who didn’t want to be named in this article shared withme is a kind of gratitude practice. She explained that she’s had a tough yeah and is really grateful for all the people who have gone above and beyond for her, but she isn’t sure they know the true depth of her gratitude. So she is planning to write her friends letters, to share her gratitude in detail! Her initial plan was to write eight letters to eight friends, one for each night of Hanukkah, but as she was telling me about it she started to laugh and admitted she may have more than eight people who deserve letters. “Maybe I’ll have to write two letters for every night!” she said, and I felt so inspired. How beautiful, to thank those who hold us up in a tangible way on this holigay about light and miracles. What miracles our loved ones are in our lives, truly. I’m not as organized as my friend so I don’t think I’ll be able to get letters in the mail in time for my friends to open them on Hanukkah, but I do plan to write at least one letter to one friend each night of Hanukkah, and I’m looking forward to taking this celebratory time to celebrate the miracle humans in mylife.

I have never responded particularly well to organizations telling me how I should practice my religion, but many of my Jewish friends partake in activities organized by Keshet, a national organization that works for full LGBTQ equality and inclusion in Jewish life, and/or belong to lovely synagogues that make them feel seen and appreciated, so if this is a way you enjoy celebrating Hanukkah, I strongly support you! Sometimes if you don’t know where to start with finding and celebrating your religion and specific Jewish holigays, a synagogue or an organization specifically for LGBTQ Jews can be really helpful and nurturing, so if you’re overwhelmed or don’t know a single other Jew or just want to start from scratch, I would Google synagogues in your area (some areas even have synagogues that express explicitly that they are supportive of their LGBTQ members, and if you live in a big city like NYC you might even find an LGBTQ-specific synagogue which is so cool!) and check out Keshet’s Hanukkah section on their website to see if they’re hosting anything in your area or if they have any suggestions about what you can do solo to celebrate.