Director Irena Fayngold’s documentary Hineini (boston-keshet.org) is about a teen’s struggle to form a gay-straight alliance in her Jewish high school in Boston and how the process changed everyone, including four closeted gay teachers who came out. Fayngold tells curve about the experience. — Sheela Lambert 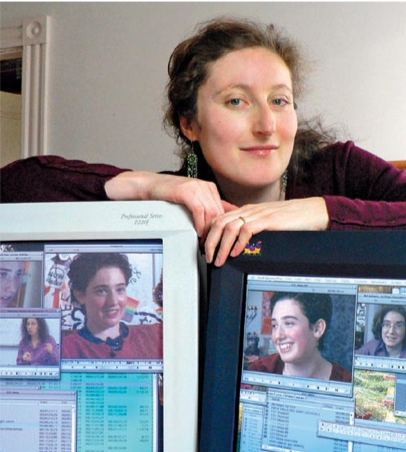 Hineini is Hebrew for “here I am.”

Why this documentary? What were you hoping to show people by documenting Shulamit’s struggle?

I wanted to show what it takes to make change. Shulamit is so successful not just because she is brave. One of her greatest strengths as a leader is her ability to reach out to others. She took risks by seeking out students and teachers who would help her. They could have rejected her—and some did. But she took that risk and because of it many did step up. This is not one girl’s story. It takes a community of people to change an institution and her strength was that she was able to understand that.

I was amazed by the catalyst effect Shulamit had on her school. Eventually, four teachers who had been in the closet came out. I was surprised that there were any gay teachers at a religious school, let alone four.

I think that gay teachers, even closeted ones, were attracted to this school because it was pluralistic [inclusive of orthodox, conservative, reform and secular students]. The New Jewish High School of greater Boston took on the challenge of pluralism very sincerely. How often in our daily lives are we given a chance to openly and respectfully engage with a person who has opposing points of view? This happened every day at the school.

Were there any surprises? Challenges?

Our biggest challenge was access to the school. The day after our first video shoot for Hineini we got a phone call from the headmaster, Rabbi Lehmann. The school board voted to deny us permission to film on school property, reversing Lehmann’s decision to allow it. It was a huge hurdle for us. How could we tell a visual story about a school without any video images of it? Fortunately, after two and half years of production, the board finally reversed its decision. So it’s a good thing it took us so long to make.

As a woman with a husband and a baby, what was your connection to the queer community at the time you started out, and how has doing this film deepened your understanding?

I am very happily married to a man, but I think deep down I am bi. Since I had questioned my own sexuality at one time in my life, this gave me some insight as I began to do research and meet the students and teachers I would interview for the film.

In the film, Shulamit thought it might be her calling to reinterpret the Torah in light of her understanding that being Jewish and gay is OK. Has she followed up on that?

Shulamit is entering rabbinical school this upcoming fall at the Reconstructionist Seminary.