Purim’s Power: Despite the Consequences –The Jewish Push for LGBT Rights, Part 3 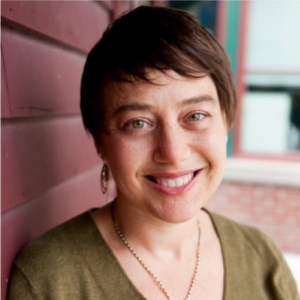 Idit Klein. “Within the Jewish community we have the opportunity, much like Esther, to take action through visibility “

Editor’s Note: This article originally ran as part of ZEEK’s 2014 series about the Jewish push for LGBT rights.

This Purim, I’m reminded of the power of coming out and speaking out, despite the consequences. In the story of Purim, the Jewish people are redeemed only after Esther finds the courage to stand up for herself and her community. It might be a stretch to imagine Esther reflecting on today’s society, but I wonder what she would say about her Jewish community today if she got her hands on the new study about same-sex marriage by the Public Religion and Research Institute.

“A Shifting Landscape: A Decade of Change in American Attitudes about Same-Sex Marriage and LGBT Issues”speaks to the widespread support of American Jews for LGBT civil rights. 83% of us support same-sex marriage, and 58% of the Jewish community strongly supports same sex marriage. But this overwhelming support wasn’t always the norm.

The landscape is changing, both within and outside of the Jewish community. When Keshet first opened its doors, there wasn’t a single Gay-Straight Alliance at any Jewish high school in the country. Today, we know of at least 15 GSA-type clubs at Jewish high schools, including at a Modern Orthodox school. When Massachusetts became the first state to legalize same-sex marriage in 2003,it wasn’t easy to find rabbis willing to stand with us on issues of marriage equality.

Within the past decade, I have seen dramatic changes within the Jewish community. Today, it’s easier to find a rabbi who will officiate at a wedding between two gay Jews than to find a rabbi who will officiate at an interfaith wedding – which, of course, raises its own issues). When we first started doing Safe Schools trainings in day schools and supplementary schools, we were regularly asked to avoid transgender issues; we were told that institutions needed to “start with gay and lesbian.” Today, we frequently get requests from synagogues, day schools, summer camps, and youth groups for training and consultation to support transgender and gender non-conforming members of the community.

So, how has this happened? The Jewish community has mirrored national trends. One by one, we have come out to our friends, our families, and our co-workers. Increasingly, Jewish youth are coming out to clergy, youth group leaders, teachers and camp counselors. When we know more people who are openly LGBT, support for full equality grows. In 2011 I stood under the chuppah and married my wife. A decade earlier, such an event would have been next to impossible. 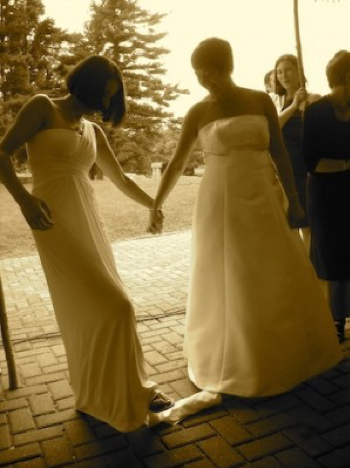 Idit Klein (R) and Jordan Namerow breaking the glass at their 2011 wedding.

And yet, much work remains. The PRRI study affirms what I have seen in the Jewish community; increasingly Jewish social justice organizations and Jewish institutions within the organized community are demonstrating their commitment to civil rights. Still, a gap remains between the attitudes expressed in the study and the actions taking place within our community and the larger world.

At Keshet we regularly hear from parents who fear for the safety of their LGBT children, from queer teenagers looking for accessible role models, from members of the LGBT community looking for communities where they can be their full selves. In too many Jewish communities, LGBT Jews may feel tolerated but not fully accepted and celebrated. Homophobic language and gender policing are still endemic in Jewish teen settings. Many Jewish professionals who work with youth are pressured to remain closeted if they want to keep their jobs. We hear from far too many LGBT Jews seeking a home in the Jewish community, who feel disregarded and alone. Even today, in 2014, there is only one Jewish children’s book, The Purim Superhero, that features an LGBT family. And it’s not just the Jewish world that needs to progress.

My Call to You

Within the Jewish community, we have the opportunity, much like Esther, to take action through visibility.

My call to you is to step inside whatever Jewish community you are a part of, whether it is one with traditional walls or one that lives on the web, and look around. Imagine you are a transgender teen boy, or a lesbian in her 30s, or the parent of a gay child. Look around and ask yourself: What do I see that demonstrates this is an inclusive Jewish community? The first step is looking; the next step is creating change. 83% of our community supports same-sex marriage. Let us all take the step from theory to action.

Idit Klein has been an activist for equality and social justice for the past 20 years. Since 2001, she has served as Executive Director of Keshet and has been honored by the Jewish Women’s Archive with a Women Who Dared award and named to the Forward 50.

Editor’s Note: This is the third in a new Zeek series on the Jewish Push for LGBT Rights.