Purim book for children creates a stir, Wins contest for its LGBT theme 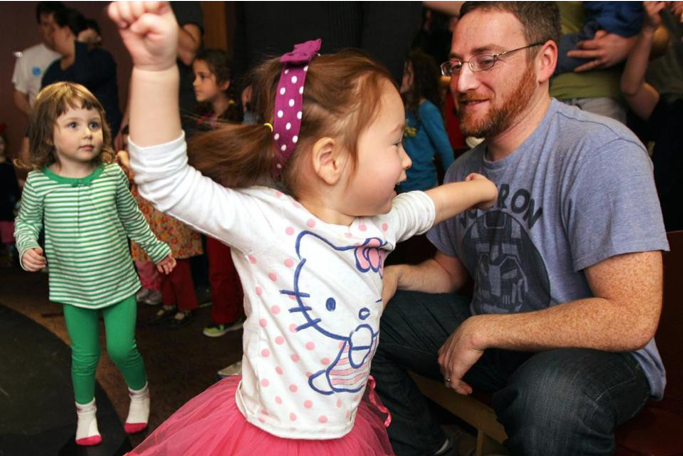 Photo: PAT GREENHOUSE/GLOBE STAFF. Two-year-old Lilo danced in front of her father, Coley O’Toole, at a Purim event at the Boston Children’s Museum.

Children dressed as superheroes, queens, and football players ate pastries and listened to the story of Purim at Boston Children’s Museum on Sunday.

The early Purim event was organized by the PJ Library, a nine-year-old nonprofit that gives free books to Jewish families with young children, in collaboration with the Jewish Community Centers of Greater Boston and Combined Jewish Philanthropies.

But one Purim book has incited some controversy for the PJ Library recently.

“The Purim Superhero,” written by Elisabeth Kushner and illustrated by Mike Byrne, was the winner of a contest for Jewish-themed books with gay, lesbian, bisexual, or transgender characters. It tells the story of Nate, a boy whose friends are all planning to wear superhero costumes to their school’s Purim festival. Nate, who wants to dress as an alien, is conflicted about his choice, and goes to his two fathers for advice.

In late February, the PJ Library announced it would offer the book only to families that requested it. Winnie Sandler Grinspoon, a trustee for the Harold Grinspoon Foundation, explained in a blog post that while organization officials would like to offer books that reflect different types of families, they know homosexuality and same-sex marriage are taboo for some of their subscribers.

‘They said …making it partially available was better than making it not available at all.’

PJ Library subscribers requested every available copy of the book — about 2,200 — within about 36 hours, said Marcie Greenfield Simons, director of the PJ Library, in a phone interview Sunday. 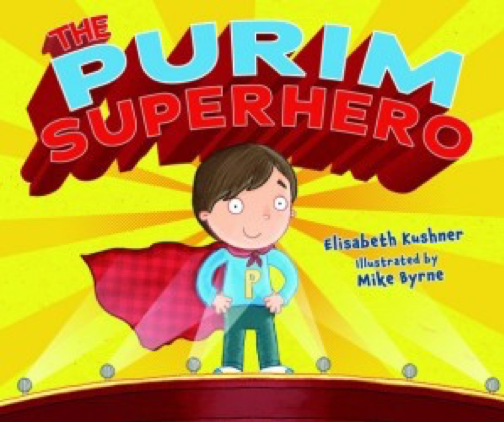 Idit Klein, executive director of Keshet, a Jamaica Plain- based advocacy organization for LGBT Jewish people, which held the book contest, said her organization has been talking to the PJ Library about the book since its release nearly a year ago.

Klein said she believes the PJ Library’s decision-making process was “thoughtful and heartfelt,” and that offering the book at all was a “positive step.” But she said she was also disappointed.

“I told them that this is demeaning to same-sex couples and their families — that there’s something so threatening and wrong about our families that children can only see them in a book if a parent requests it,” Klein said in a phone interview Sunday. “They said that this is the best they can do at this time, and making it partially available was better than making it not available at all. And I agree with that.”

Greenfield Simons said the PJ Library gave a “tremendous” amount of thought to the matter.

“I think that we are aware that there are many people who would like the PJ Library to send out ‘The Purim Superhero’ as a regular PJ Library collection, and all of that is up for conversation going forward,” Greenfield Simons said. “[When stock ran out] within about 36 hours, we again contacted the publisher and made a commitment to do a reprint of the book after the order cutoff date, which is March 13, to ensure that every family that wants the book will, indeed, get it. And we are very happy to provide the book to, at this point, the thousands of families that have requested it.”

In the story of Purim, written in the biblical Scroll of Esther, an adviser to King Ahasuerus named Haman plans to kill all Jewish people in Persia. Esther, a Jewish member of the king’s harem who became queen without revealing her religion to Ahasuerus, persuades him to spare her people with guidance from her cousin, Mordechai. Haman is hanged, and the Jewish people celebrate.

Today, Jews celebrate the holiday by wearing costumes, sending food-filled gift baskets to friends, and rattling noisemakers at the mention of Haman’s name. The holiday this year begins the evening of March 15 and ends at sundown March 16.

The PJ Library — the name is a nod to pajamas and bedtime stories — was founded in 2005 by Harold Grinspoon, a Western Massachusetts philanthropist who made his money in real estate,to encourage literacy and a sense of community in Jewish families.

In January the organization, which operates in the United States, Canada, Israel, Australia, and Mexico with plans to expand into more countries, gave away its 5 millionth book in NorthAmerica to a 3-year-old in Natick. Starting next month, it will deliver 130,000 books a month to Jewish families in North America, Greenfield Simons said.

It has also started sending books to 45,000 Israeli-Arab children through its new initiative, Maktabat al-Fanoos, “Lantern Library” in Arabic.

In a crowded Children’s Museum on Sunday, Mark Sokoll, president and chief executive of the Jewish Community Centers of Greater Boston, greeted children; he was dressed as King Ahasuerus, wearing a purple velvet cape and a magnificently long false beard.

“Look who’s here!” he said, spotting Elena Weber of Cambridge in a frilly dress and pink crown. “The queen! The queen is here! I’ve been waiting for you.”

Elena, who turns 4 next week, hid behind her father’s leg and slipped to the floor. She was tired from a day of dressing up in costumes and seeing a Purim-themed puppet show.

Elena’s parents, Sarah and Tom Weber, are Scotland residents and PJ Library subscribers visiting Cambridge on an academic sabbatical. They try to expose their daughter to her Jewish culture whenever they can, Sarah Weber said.

Gal Tziperman Lotan can be reached at [email protected].