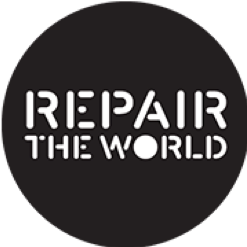 During Pride Month, Repair the World is featuring interviews with the people and organizations who are on the forefront of the LGBTQ movement. This week: Colorado native (and current Denver resident), Shanna Katz, talks about her volunteer work with Keshet – an organization “working for the full inclusion of lesbian, gay, bisexual, and transgender Jews in Jewish life” – and the important role Keshet has played in her own journey.

How did you get involved with Keshet?

When I moved back to Colorado from Arizona in early 2011, I felt very engaged in the queer community, but very disconnected from the Jewish community. Several months later, I started getting emails from friends saying “I saw this poster for a queer Hanukkah party that you might like.” I checked it out and thought it looked fun, plus it was being held at my favorite vegetarian restaurant. I hesitated because my partner is a transman and not Jewish, so I wasn’t sure he’d be welcome. But it turned out that there were people there from all walks of life and Judaism. It immediately felt like a safe space to be my kind of Jewish and talk about issues relevant to the LGBT and Jewish communities. For the last year and a half since then, I’ve gotten much more involved.

In what ways have you gotten involved?

I’m on Keshet’s Young Adult Planning Team. There’s this fear across the Jewish community that we’re losing people in our 20s-30s, so the original idea of the team was to make sure that the events we were planning felt relevant and meaningful to the younger adult community. We got a grant through a local foundation that paid for a year-long salon series, so we planned fun and educational events like a talk on transgender issues within Judaism. I taught a class on sexuality and Judaism, and we hosted a spoken word performance by Harvey Katz’s Athens Boys Choir. We held the salon series in coﬀee shops, bars, people’s homes – places that felt distinctly diﬀerent from the traditional Shabbat service space.

Through Keshet I’ve volunteered for our local meals on wheels program, and we have an upcoming event with Ekar, a local urban farm that provides food for Jewish family services. Each year, we march together with other Jewish groups in the Pride Parade, and recently my partner and I hosted a Keshet Shabbat. We alternate between religious and non- religious locations and usually have a lay-led service followed by a potluck. Our Queer Seder, which we hold during Passover is also one of the largest in the country. Last year we had about 150 people attend.

What role does Keshet play in your own life?

Growing up, I had a bat mitzvah and was president of Hillel during college, but then I lost my connection with the Jewish community. I had no ideas Jews had something to say about issues I cared about. So for me, Keshet been an important pathway back into Judaism, and I think it has the potential to do the same for many other people.

Find out more about Keshet’s work at their website.