It was not a coincidence that San Francisco Pride — a spirited, two-day celebration of the lesbian, gay, bisexual and transgender community — coincided with the convergence of Jewish LGBT leaders in Berkeley.

Many of the 90-plus participants in the first-ever Jewish LGBT movement-building retreat attended pride events and got to let loose and have fun in San Francisco.

Once the three-day assembly began June 27, however, the mood was starkly different.

Seated around tables at U.C. Berkeley Hillel, representatives from local, national and international (Israel, Mexico and the U.K.) Jewish LGBT organizations and congregations discussed how to become an actual movement — a lofty idea with goals not easily executed or agreed upon.

“This was the first conference of its kind,” said Jayson Littman, who founded He’bro, a networking site that produces events for gay Jews in New York. “If everyone wanted all the solutions now, it wasn’t going to happen.”

Some shouted. Some were close to tears. One person said the group was “clueless” about bringing an organized vision to its primary funders — the Charles and Lynn Schusterman Family Foundation, with support from the Richard and Rhoda Goldman Fund. Another person said the retreat participants accomplished so much in 48 hours that it made her head spin. 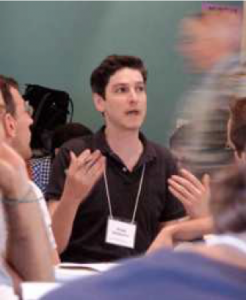 “The craziness is coming from the pain that is inside all of us,” said Sharon Groves, who represented the Human Rights Campaign Religion and Faith Program. “The confrontations are a great thing because some of the unspo- ken points finally are being touched upon. This is a good first step for us to mobilize.”

Three national organizations led the conference: Nehirim, a New York– based nonprofit that builds community; Keshet, a Boston-based organization that works for the inclusion of LGBT Jews; and the Denver-based Jewish Mosaic: The National Center for Sexual Gender and Diversity.

On June 18, a week before the retreat, Keshet and Jewish Mosaic announced a merger, forming the largest American organization working for Jewish LGBT rights.

While conference organizers acknowledged that the gathering of nearly 100 Jewish LGBT leaders in one space was indeed historic, they could not ignore the pre-existing tensions inherent with an event of this nature. 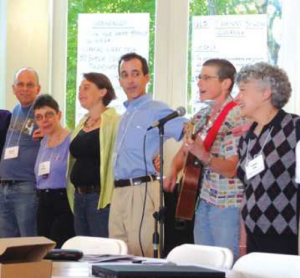 “As with any movement building or social change, these moments are driven by passionate comments,” said organizer Gregg Drinkwater, executive director of Jewish Mosaic, which also has an office in San Fran- cisco. “You have people deeply invested not just in their own identity, but also in their family’s and com- munity’s.”

Many people told Drinkwater that whatever the outcome, it was “so valuable” to connect, especially for those with limited access to Jewish LGBT programming.

Yet the group struggled to articulate common goals for creating the movement, often turning the discussion toward both the hopes and perils in the quest to build trust and move forward.

At random, participants threw out answers to what might interfere with the group’s future plans, including the law, isolation, fatigue, inexperience, egos, lack of communication and fear of changing the status quo.

In turn, they offered their hopes and aspirations: “That a queer Jew isn’t assigned an identity,” one said. “That we have ongoing movement-building meetings.” “That the next time we have more fun.”

International leaders in the Jewish LGBT community, including Luis Perelman of Mexico, treated the confer- ence as a training to get exposure and get inspired.

An activist for LGBT Jews since the 1980s, Perelman approached the World Congress of Gay, Lesbian, Bisex- ual, and Transgender Jews in 1994 to ask who was representing gay Jews in Mexico and Latin America. The answer was no one.

“I thought maybe I could do this in Mexico and learn not to be afraid of the Jewish community,” Perelman said, referring to his fear of coming out until after college. “I lived it and was not afraid anymore.”

Perelman filled that role in 1994 by launching Shalom Amigos, the first gay Jewish support group organized in Latin America. He went on to facilitate the formation of a similar group in Argentina and lead educational workshops throughout Latin America.

He planned to take the comments, information and contributions from the convention back to Mexico, where he said there’s still a lot that needs to be accomplished.

“We want to show the Jewish community that being gay should be celebrated and not just tolerated for the sake of Jewish continuity,” Perelman said. “We are committed to saving lives and promoting Jewish values.”