On Not Letting Ourselves Off the Hook

Helping folks locate themselves in Jewish tradition, religion, history, to help them understand why Jewish existence and identity might be relevant and even valuable, especially when Jewish education seldom mirrors the realities of Jewish life, namely, issues as complicated as gender and sexuality. It’s difficult to do that work, and it is even more difficult to do it well, but this year, let’s not let ourselves off the hook. The resources are here, and they are inspirational, inclusive and far reaching.

Keshet, a Greater Boston based organization committed to creating Jewish communities that are fully, meaningfully inclusive of gay, lesbian, bisexual and transgender Jews, has launched The LGBT Heroes Project, a series of posters along with an online curriculum aimed at intergrating LGBT Jewish history into education, increasing visibility of queer Jews, and modeling possibility for young Jews confronting their sexuality. 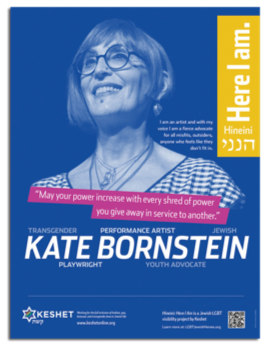 Andrea Jacobs, Keshet’s Education Director, one of the brains behind LGBT Heroes, says the impetus for the project came from the mouths of those who participated in Keshet’s Training Institute for Jewish Educators. “Folks said, great! We need visual media, we can’t counteract impressions without it.” LGBT Heroes aims to “democratize access, so students aren’t reliant on their teachers to give them these resources. They can see that there are lots of ways to be gay and Jewish. The posters are about awareness, visibility and pride. You don’t have to spend a ton of time looking at them, you can look and then go to the website and learn more.”

The first three posters feature writers Leslea Newman and Kate Bornstein and the late activist/politician Harvey Milk. ‘We’re committed to having transgender and genderqueer representation,” says Jacobs. “This isn’t just about sexual orientation.” You can also visit http://lgbtjewishheroes.org/ share-your-heroes to tell Keshet about your own LGBT Jewish hero, which could be featured in the next series of posters. “

“My goal is for these posters to be hung in every Hillel, day school, and JCC,” Jacobs says. “They’ll be a force for inclusion.”

Be part of the force by getting the posters—$10 each, and the set of all three for $25.