On leaders and lions

Being a plenary speaker is the closest I’ll ever come to being on an Oscar stage.

I’ve often said that being a plenary speaker at the Jewish Federations of North America General Assembly (GA) is the closest I’ll ever come to being on an Oscar stage.

When I spoke at a GA plenary in 2007, a federation representative explained that music chosen carefully for me would play in the background as I walked onto the stage under the bright lights. Between my own dramatic score, the booming voice that welcomed me to the audience of several thousand, the jumbo screens, and teleprompters, I felt detached from the highly produced, performative nature of each and every moment. At the same time, I felt honored to be addressing the largest annual gathering of Jews anywhere in the world. 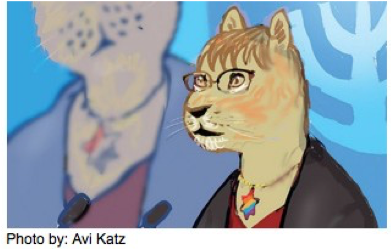 Four years later, at the recent 2011 GA in Denver, I felt this same mix of connectedness and alienation.

Unlike some young adults, I am not cynical about the role of federations in Jewish communal life. I believe federations serve a vital purpose for local communities and for the Jewish people worldwide.

My own organization, Keshet, has received funding from CJP, the Jewish Federation of Greater Boston, for over ten years. I trust that federation leaders and professionals are largely sincere in their desire to engage young adults, women, lesbian, gay, bisexual, and transgender Jews (LGBT), and others who have been historically marginalized in the organized Jewish community.

And yet, there were many people at this year’s GA who, like me, felt the social and socioeconomic limitations of the federation world. One Jewish communal professional in her late 30s told me privately, “Even though women are here, it still feels like an old boys’ club.” Another colleague, a Hillel professional in his 40s shared, also confidentially, “I’m part of the ‘organized’ Jewish community, but I feel turned off when I’m at the GA. There’s a clear message that the more money you give, the higher your status.

Is one’s financial contribution the only measure of commitment to the Jewish community? Our community is profoundly different from what it was several decades ago. Many Jews in their 20s, 30s and 40s no longer feel the same connection to federations that their parents and grandparents feel. Declining donations to federations tell this story starkly. This means it is imperative for the GA to evolve so that it reflects the ethos of inclusion that I do believe is at its core. For next year’s GA, here are three value-based propositions:

At the 2011 GA, the first several speakers at the opening plenary were white, Ashkenazi men in their 50s and older. Is this what the North American Jewish community looks like in 2011? Thankfully, we know that our community’s leadership is increasingly diverse with more women, gay and lesbian Jews, and young adults running organizations.

While both lay and professional leadership remain dominated by men, we’re moving in a more inclusive direction. The GA should reflect this movement. In fact, federations should go further and lead this movement. At the GA, JFNA (Jewish Federations of North America) should not only showcase its current leaders but leverage the leadership to which it aspires. Jewish women, Jewish young adults, LGBT Jews, Jews of color, Jews by choice, and Jews in interfaith relationships are increasingly part of the culture and structure of organized Jewish life. JFNA must bolster the powerful platform of the GA to represent a full picture of Jewish life in the 21st century.

2. Address how economic privilege shapes the experience of Jewish life.

Wealth is on conspicuous display at the General Assembly. Lion of Judah, the women’s philanthropy arm of the federation system, offers golden Lion of Judah pins adorned with rubies, diamonds, sapphires, and emeralds to communicate the value of a woman’s financial contribution to federations. I support celebrating those who contribute financially to Jewish life. But if financial generosity is the only contribution we esteem publicly, we eclipse the commitment and hard work of so many others. I propose that in addition to honoring philanthropic leadership, JFNA should honor leadership that is measured by time and wisdom invested in Jewish community. Imagine a GA in which the golden Lions of Judah are joined by the glimmer of some symbol of contributed time and labor. The honor we give our philanthropists will only be heightened by widening the circle of distinction.

3. Engage with the broader socioeconomic reality and understand that affluence comes with social responsibility.

The GA must move beyond the bubble of its own privilege. This year’s GA devoted virtually no attention to the Occupy Wall Street movement that is sweeping the country, and arguably, the world. To be sure, the Occupy movement raises complex questions that discomfit the affluent. But if JFNA wants to be relevant and appeal to 99 percent – or even 51 percent – of the Jewish community, it cannot ignore the throngs still filling city squares long after the GA’s bright lights dim. At next year’s GA, let’s be sure that these issues of wealth and inequality are part of our communal conversation. Many of us who are proud to be part of the organized Jewish community are also working for a more just, egalitarian society in the clear light of day.

The writer is the executive director of Keshet, an American Jewish organization working for the full inclusion and equality of lesbian, gay, bisexual, and transgender Jews in Jewish life.