LGBT Jews in the San Francisco Bay Area have a new addition to their leadership ranks with Rebecca Cariati, who recently stepped into the role as regional director of Keshet. 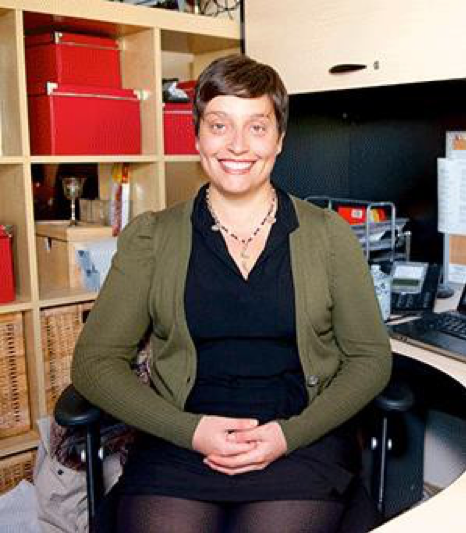 Since taking over the Bay Area leadership post in September from David Robinson, the former regional director who was hired in 2012, Cariati, a 30-year-old queer woman, has been busy learning about what her predecessors accomplished and planning for the organization’s first-ever fundraising gala, Glimmer, slated for December 6.

Keshet is a national grassroots organization that works for full equality and inclusion of LGBT Jews in Jewish life. It is based in Boston, according to its website.

In 2011, the organization opened its Bay Area office, taking the place of former LGBT Jewish organization, Mosaic, and eventually taking over the programs once overseen by the Jewish LGBT Alliance at the Jewish Community Federation of San Francisco, the Peninsula, Marin and Sonoma counties. The alliance at the federation continues to operate as an all-volunteer advisory committee overseeing grants to Jewish LGBT organizations, including Keshet.

Cariati is the third regional director of Keshet, which works to bring LGBT Jews into the fold of the Bay Area’s large and diverse Jewish community.

The organization operates on an annual budget of $370,000, according to Cariati, who declined to state her salary. It offers a variety of programs, including LGBT cultural competency training in Jewish organizations, community centers, and day schools, said Cariati about some of the established programs that she plans to build upon with the assistance of 1.5 full-time staff, not including herself.

The Bay Area is home to the U.S.’s fifth-largest Jewish community and to an LGBT population estimated to be 36,000, wrote Nora Smith in an opinion piece in the Bay Area Reporter in 2013.

“My predecessors have done an amazing job of creating a community base, creating a name for Keshet, such that people in the community know that we exist,” said Cariati, grateful for the early support of Keshet Bay Area from the federation and local Jewish foundations.

The B.A.R. sat down with Cariati earlier this month at Keshet’s office at Congregation Sha’ar Zahav in the Castro to talk about her vision for Keshet San Francisco Bay Area and the experience she brings to the queer Jewish community and the community as a whole.

An East Coast transplant by way of an employment opportunity a little more than a year ago, Cariati settled in Oakland, where she enjoys gardening in her backyard. That is when she isn’t exploring nature camping or hiking or enjoying a stroll along the beach. Cariati was also a professional baker at one point in her career, she said.

“I’m very attracted to the vibrancy of community here, whether it be spiritual community, activist community, or folks who are just generally trying to create spaces that are transformative,” said Cariati. “I think that the innovation that is happening here in the San Francisco Bay Area is really bar none in the country and the climate ain’t bad either.”

When the opportunity arose at Keshet, Cariati, who spent a majority of her career working in the Jewish community, was working in cooperative development in the grassroots economic development arena, she said. A friend, Rebecca Stone, knowing her passion for general “inclusion and equality” and how much she loved her queerness and Jewishness, nudged her to look into the position.

“I felt like I wanted to spread my wings in economic justice and she said, ‘No Rebecca, I really, really think that you should consider this,'” said Cariati, who earned her undergraduate degree in peace and conflict studies at New York University’s Gallatin School of Individualized Study.

She doesn’t regret her decision to heed Stone’s advice.

“I think that she saw a ripeness for me to step into a position of this type of leadership, which I really appreciate her seeing,” said Cariati.

“Rebecca is an outstanding person to lead our Bay Area office,” Klein wrote in an email. “Professionally she has worked in social change movements around the globe including Haiti, the Middle East, and the U.S. Much of her work has been at the intersection of anti-racism, economic justice, and political rights, as well as justice more broadly.

“As an LGBTQ Jew, Rebecca brings a deep personal commitment to creating a more just and inclusive world,” Klein added.

“The truth is that Keshet’s work is compelling,” said Cariati. “It really does help the Jewish community translate our good intentions to have open arms into tangible action. It also creates safe, nurturing and generative spaces for LGBTQ Jews to celebrate all aspects of who they are together in community.”

Cariati said that Keshet’s work is particularly important for the Bay Area’s LGBT Jews because there is a sense of “gay blasé” that has enveloped the community after years of queers working toward inclusion and, for the most part, achieving it.

“There are ways in which our institutions conduct themselves that aren’t necessarily inclusive and Keshet’s work in the Bay Area is really critical in helping translate the really good intentions into concrete action that show that, ‘Yes, we are open-armed,'” said Cariati.

One of the things that she plans to do is delve deeper into the Peninsula through LGBT cultural competency programs and broadening LGBT Jews presence, even if it’s simply with a Safe Spaces sticker. She also wants to hone Keshet’s added value to broader LGBT and non-Jewish LGBT community events and programs.

“Keshet is an effective convener of all of the different colors of the rainbow, if you will, within the queer Jewish community locally,” said Cariati, who ultimately wants the Jewish community to embrace the diversity of its members as a whole.

“My vision for the Jewish community is a community that knows how to embrace each and every one of its members,” said Cariati, pointing out that if the organization is doing what it’s supposed to be doing eventually there will be no need for it. “We will know how to treat one another in a way that is welcoming in the largest sense, in the greatest, deepest sense.”