Two minutes after the clock struck midnight on May 1, Fran and Anna Simon became the first LGBT couple in Colorado to legally unite, under the state’s new civil union law.

The Simons had already had a Jewish wedding ceremony eight years earlier replete with chupah, rabbi and stepped-on glasses. 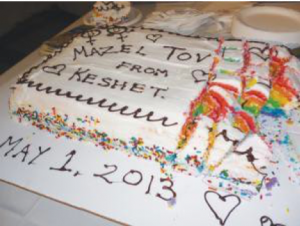 Growing numbers of states are recognizing same-sex marriage —Washington, D.C. and 12 states, including New York, now have full marriage equality and seven others (including Colorado) have comprehensive civil union or domestic partnership laws.

While no one seems to have data on how many Jewish same-sex couples are heading to the chupah as a result of the new legislation, anecdotal reports suggest the number is significant.

Rabbi Sharon Kleinbaum of Congregation Beth Simchat Torah, the LGBT synagogue in Manhattan, said that in the first few months after same-sex weddings were legally recognized in New York State, almost two years ago, she and the other CBST clergy “did a lot of civil marriage licensing signing for couples whose Jewish weddings we’d done in the past.”

In those first heady days, CBST set up a “pop-up rainbow chupah” outside City Hall, which the congregation still uses for weddings. Rabbi Kleinbaum will use it later this month at a small ceremony for an elderly couple that has been together for 27 years.

Nonetheless, she said, “I wouldn’t say we’ve seen a huge change in numbers once that initial period was over and people got caught up.”

She noted that with same-sex marriage not recognized nationally — something she and others are hoping will change when the U.S. Supreme Court rules later this month on the legality of the Defense of Marriage Act — LGBT couples still cannot file taxes jointly or receive many of the other benefits and protections awarded to straight couples.

“We have a lot of binational couples, and New York State recognition does nothing for them,” she said, adding, “And marriage is only one issue. The issue that there are no federal protections for [LGBT] employment rights or other civil rights is even more disturbing.”

Bonnie Rosenbaum, a spokesperson for Keshet, a national advocacy group for LGBT Jews, said that when New York’s law went into effect, her group got “a lot” of inquiries from same-sex couples looking for a rabbi to officiate.

That led the group to create an online “Equality Guide,” where users can search for LGBT-friendly clergy and Jewish institutions.

The guide has more than 800 institutions and clergy listed so far.

Keshet also has an online repository of wedding liturgy to help couples and clergy plan their ceremonies.

While virtually no Orthodox rabbis will officiate at same-sex weddings, the roster of liberal ones available is large and growing. Last year the Conservative movement’s Rabbinical Assembly published guidelines to help members prepare for same-sex weddings. Meanwhile, the Reform movement’s CCAR Press last year updated its 2001 “Beyond Breaking the Glass: A Spiritual Guide to Your Jewish Wedding” to describe same-sex nuptials as “weddings” rather than “commitment ceremonies.”

“The vast majority of Reform rabbis now officiate at same-sex weddings,” Rabbi Hara Person, CCAR Press’ publisher and director, told The Jewish Week. Since legalization in New York and else where, some rabbis, including Rabbi Person, who has a High Holy Days pulpit at an LGBT synagogue, have seen “spikes in demand” to perform same-sex weddings, she said.

Overall, however, she sees a “tremendous normalization over the past 10 years or so” in terms of how Reform rabbis treat gay marriage.

“Today for most of my colleagues there’s no differentiation — it’s just a wedding,” she said. “There were same- sex liturgies that were developed to meet needs before, but today many rabbis do the standard wedding ceremony regardless of the genders. They may change the pronouns or add a special reading, but it’s a wedding.” ✦