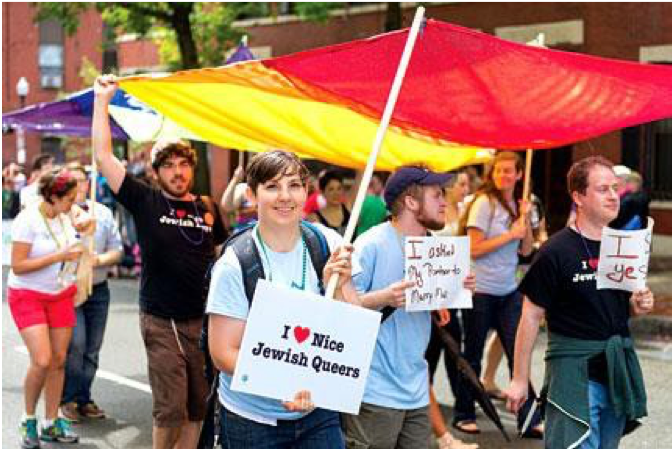 BOSTON, Mass.—With the holiday season approaching, LGBTQ people who are spiritual and/or religious may be looking for places of worship, congregations, or other organizations through which they can celebrate while also feeling safe and accepted. The New England area offers many progressive Christian, Jewish, Muslim, and other groups of various denominations who are dedicated to inclusion of LGBTQ people, as well as those that are explicitly run by and for LGBTQ folks and allies.

Keshet is a national grassroots organization that works for the full equality and inclusion of LGBTQ Jews in Jewish life. Based in Jamaica Plain, they serve LGBTQ Jews, leaders and staff of Jewish institutions, queer and ally Jewish youth, and parents and family members of LGBTQ Jews.

“Keshet strives to cultivate the spirit and practice of inclusion in all parts of the Jewish community,” said Bonnie Rosenbaum, director of communications at Keshet. “Our work is guided by a vision of a world in which all Jewish organizations and communities are strengthened by LGBTQ-inclusive policy, programming, culture, and leadership and where Jews of all sexual orientations and gender identities can live fully integrated Jewish lives.”

Keshet is a national grassroots organization that works for the full equality and inclusion of LGBTQ Jews in Jewish life. Based in Jamaica Plain, they serve LGBTQ Jews, leaders and staff of Jewish institutions, queer and ally Jewish youth, and parents and family members of LGBTQ Jews.

The organization offers trainings, community building, and a number of other services, in addition to events and rallies for LGBTQ equality and social justice. This year, the group will celebrate Chanukah with two events in the Boston area. The first, Keshet’s 21+ Chanukah Party, will be held Dec. 13 from 8 p.m. to 11 p.m. at a Keshet member’s home in Boston.

“We’ll kick off the festivities with a communal havdalah [service] to mark the end of Shabbat, followed by a night of music, dancing, schmoozing, noshing, and drinking,” said Rosenbaum.

The second event, Eight Stories, will be held Dec. 21 at 3 p.m. at The Boston Synagogue. The event is free, open to all ages, and will include storytelling, crafts, traditional fried food, singing, dancing, and the lighting of the menorah at 4:45 p.m. For more information and to RSVP for these and other events, visit www.keshetonline.org/events.

“Simply put, if we don’t create inclusive Jewish institutions, we are going to lose some of the best and brightest in our community!” said Rosenbaum. “We know that the Jewish community is strongest, most vibrant, and most relevant when all Jews are actively included and valued.”

Leah Schwartz, a 17-year-old who attended one of Keshet’s weekend gatherings for LGBTQ Jewish teens and their allies, shared the benefit of joining the group.

“As a gay student in a Jewish day school, I often feel like I am the odd one out,” said Schwartz. “At the Shabbaton, I finally felt like there was no part of myself I needed to hide, and I was able to embrace myself in its entirety. Being reminded of how great it feels to be open has made me more courageous and determined to work to make all Jewish spaces ones where we can be open and honest.”

In Providence, R.I., The Reverend James Ishmael Ford, senior minister of First Unitarian Church of Providence, said the congregation has been committed to addressing LGBTQ concerns for decades.

“I’m proud to be able to say that in the run up to our achieving marriage equality in Rhode Island, our congregation was the leading religious voice in support, it being our principal social justice issue for the past six or so years,” said Ford. “While we have a relatively high percentage of LGBTQQ people in our congregation, I think the reason we currently have no specifically focused activities is that we’ve largely achieved a level of normalization and comfort among us, and so LGBTQQ folk can come here and simply be ordinary members without having to be supported in particular ways.”

Ford said they are also open to specific activities as needed.

“I conducted a memorial service recently where I learned the deceased and his husband actually met at a gay men’s professional support group here many years ago,” Ford said. 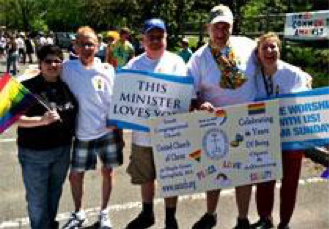 Holiday offerings by the church include a focus on remembering the story of Hanukkah Dec. 14, joining it with the work of Amnesty International; a multigenerational Christmas Pageant Dec. 21; and Christmas Eve services Dec. 24. For more information, visit www.firstunitarianprov.org.

In WESTERN Mass., South Congregational Church, United Church of Christ in Springfield regularly flies the rainbow flag above their front door, hosts events for World AIDS Day, and has built relationships with organizations such as OUT NOW and Northampton Pride.

“Our Gay-Straight Community group of LGBTQ and straight members of South Church meets regularly to focus on the interests and needs of the LGBTQ community and to build a stronger relationship with our straight members,” said Bill Conley, moderator, South Congregational Church, UCC. “A recent meeting hosted OUT NOW leaders and youth to understand the issues and needs of homeless and near-homeless LGBTQ youth in our area. We hope to help address the needs.”

In Western Mass., South Congregational Church, United Church of Christ in Springfield regularly flies the rainbow flag above their front door, hosts events for World AIDS Day, and has built relationships with organizations such as OUT NOW and NorthamptonPride.

Conley shared that gay, lesbian, bisexual and transgender worshippers account for up to a quarter of the congregation on any given Sunday. The nursery and Sunday School are welcoming of children from LGBTQ families, and weddings and baptisms for LGBTQ families are also performed.

“Many of us grew up in families and religious institutions that assumed we weren’t included in God’s promise of a better life and grace through his Son Jesus Christ,” said Conley. “Consciously and unconsciously, that assumption affected our lives and relationships. It’s vitally important that churches like South Church boldly proclaim the promise applies equally to LGBTQ people and to demonstrate it by inviting everyone into our church community and by recognizing the gifts each person brings to the Body of Christ.”

The church will offer Advent Rejoice nights on Wednesdays throughout the celebration of Advent, including a meal and reflection hour. A Living Nativity event will be held Dec. 21 complete with “animals in the Sanctuary” during the 10 a.m. service. A Christmas Eve candlelight service will begin at 5:30 p.m. Dec. 24 with lessons and carols. For more information, visit http://sococh.org/.

To find other churches, synagogues, and other religious and spiritual organizations throughout New England, visit www.gaychurch.org.