Most Sundays, Benjamin, a junior at a Westchester high school, goes to the local coffee shop or synagogue to hang with other teens. Sounds like a typical teen routine, except for Benjamin it’s a connection to his peers he’s never felt before.

“Keshet meetings allow me to connect my two biggest identities,” Benjamin says. “Until then, my Jewish and queer identities were totally separated.”

Before Benjamin started attending a group at the Keshet Jewish LGBTQ Teen Engagement Initiative in Westchester, supported by UJA-Federation, he would talk about being Jewish with Jewish friends and being queer with LGBTQ friends. But he kept those parts of himself separate like coastal cities with a vast country in between.

“There was no specific space to be both,” says Benjamin. “Keshet connected me to other teens who were Jewish and queer. Knowing people like me, who had similar experiences, made me feel like I had a place where I belong and could talk with someone. Being able to feel connected like this is amazing and really big for me.” 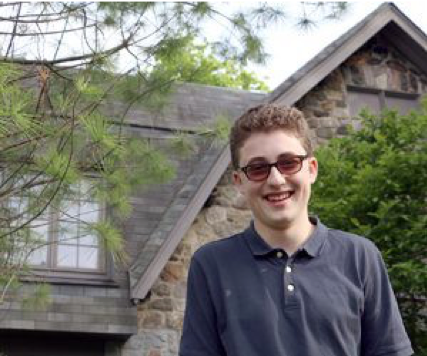 Benjamin outside one of the Westchester synagogues that have hosted Keshet LGBTQ teen groups.

At Keshet, teens participate in group discussions facilitated by a leader, exploring self- care, Jewish texts, personal experiences, and other topics. The teens have also visited local Hebrew schools to talk with students and raise awareness about what it means to come out, how LGBTQ and Jewish identities relate, and different terms used to express LGBTQ identities.

It’s a community that can bring comfort, notes Yakira, a high school sophomore in Westchester, who also participates in Keshet.

“Just understanding that there are people like me; there’s comfort in that,” she says, “And knowing I’m not completely alone in my experiences, that I can relate to other people and they can relate to me.”

Yakira is hopeful that change is possible. “The Jewish community could listen and validate the experiences of queer Jewish people and welcome us into the community — by reading and discussing Talmud or Torah through a queer lens, or having a synagogue sponsor a Pride Shabbat, or creating a task force to educate the community. By doing that, change could be made.”

At Keshet, the teens in the group have learned a great deal from each other, Yakira says. She’s looking forward to marching with Keshet in the upcoming NYC Pride March.

“We’ll have a brunch, matching tee shirts, blast music, and a massive flagpole with pride flags,” Yakira says, her voice filled with excitement.

Her enthusiasm — and pride — rings out loud and clear.