Just hours after the shooting rampage at an Orlando gay nightclub that left 49 dead and 53 injured, Rabbi Sharon Kleinbaum of Congregation Beit Simchat Torah (CBST), the oldest and largest LGBT congregation in New York, joined a vigil in the West Village with hundreds of others to mourn the victims and unite in solidarity with other faith leaders.

“Clergy from all denominations united to express solidarity and to reject any anti-Muslim energy coming out of this,” Rabbi Kleinbaum told The Jewish Week. In a “tear-filled” ceremony in front of the Stonewall Inn, she was the first to read aloud two names of those killed in the attack. 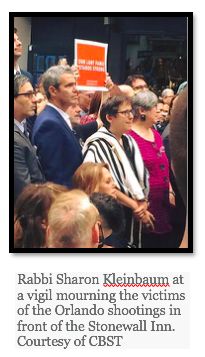 But back at the synagogue, “just crying and weeping” is not on the agenda, said Rabbi Kleinbaum. Aside from working closely with the New York Police Department to up security, as well as adding the names of the victims to the congregation’s Monday Yizkor service, a ritual prayer to remember loved ones who died, Kleinbaum stressed that the time for political action is now.

“There are some issues we can just pray about — this is not one of them,” said Rabbi Kleinbaum, who said she is “ready to go to NRA headquarters, to the offices of senators and Congress people who continue to vote for assault weapons and against sensible gun control — with a rainbow flag and glitter and get arrested.”

“Who’s in?” she asked others on her Facebook page.

“Being that we’re gay and Jews, we have the unique position of maintaining two vulnerable identities,” she said, commenting on the unique intersection of Gay Pride Month, the Jewish holiday of Shavuot, and the start of the Muslim fast of Ramadan. “Still, we are not afraid.”

CBST is not the only congregation ramping up activity in the wake of the attack. 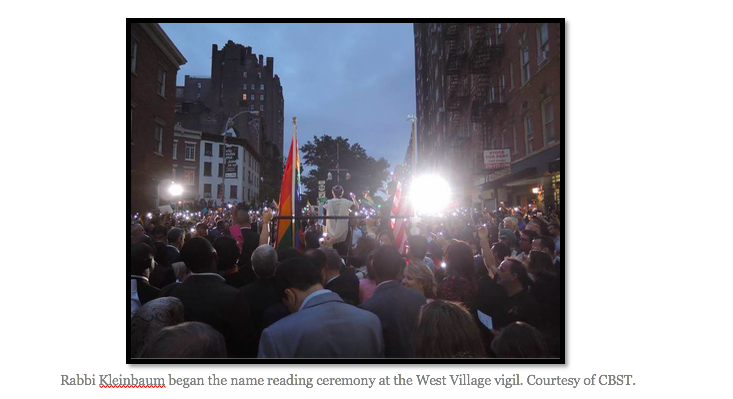 B’nai Jeshurun, a 1,700-family strong Conservative synagogue on the Upper West Side with a particularly large constituency of LGBT congregants, is organizing an interfaith vigil for Wednesday evening to commemorate the victims. Several churches, synagogues (including Romemu, the Jewish Renewal synagogue on the Upper West Side), and Muslim organizations, including the Muslim Community Network and the American Society for Muslim Advancement, have signed on to participate.

“Tragedy can be a time to connect and grow stronger,” said Rabbi Rolando Matalon, BJ’s senior rabbi. He said security would remain a “priority” at the vigil. The synagogue also remains active in the “Do Not Stand Idly By” campaign, a diverse network of religious congregations advocating for more stringent gun control laws, and the Multifaith Alliance for Syrian Refugees.

“Our response to this tragedy must fall in line with our values and priorities,” said Rabbi Matalon.

At Congregation Rodeph Shalom, a leading Reform congregation on the Upper West Side that has been particularly attuned to LGBT needs, the annual Pride Shabbat service scheduled in advance for this Friday night will double as a time to commemorate the victims of the attack.

“Long ago we learned that an attack on any group of people is an attack on every other group as well,” Senior Rabbi Robert Levine told The Jewish Week. The Friday night service will be interspersed with readings and special commemorations in honor of the victims, he said. “This is one arena where Jews from every denomination can come together.”

Rabbi Angela Buchdahl, senior rabbi at Central Synagogue, a large Reform congregation in Midtown East, participated in a multifaith service through Manhattan’s Auburn Theological Seminary on Sunday evening and Central’s clergy sent a special message to their congregants shortly after the attacks.

“Today, as we marked our holiday of Shavuot, we read from the Book of Ruth and offer these words to the families and communities who are suffering: ‘I will not abandon you. Wherever you go, I will go. Your people are my people.’ May we, as a Jewish community, find ways in word, prayer and deed to combat the hatred that led to the worst mass shooting in our nation’s history.”

At Keshet, a national organization that works for full LGBTQ inclusion in Jewish life, the priority is “helping our teens cope in the aftermath of this tragedy,” said Idit Klein, Keshet’s executive director.

“Teens don’t yet have the lived experience to realize the real vulnerability of LGBTQ people,”she said, adding that the situation still feels “very raw.” Programming for the organization’s expansive network of teenagers across the country is already underway, she said. “I’m 43 yearsold — the memories of physical attacks against LGBTQ people are still fresh in my mind. Sadly,this is a reminder that we still live in a time where there are people who want to destroy lives purely because of who people love.”

Klein added that the first community leaders to give her a call in the aftermath of the attackwere local Muslim leaders in Boston, where the organization is headquartered. Much of the organized Jewish community was offline because of the Shavuot holiday. “There is a fraught history in the Muslim community of those who are LGBTQ,” she said. “Still, there’s solidarity. People are feeling sad, scared and vulnerable.”

Jayson Littman, founder of Hebro, a social startup group for gay Jews living in New York City, said that the Pride Happy Hour he had scheduled for next Wednesday evening would now also serve as a space to memorialize the victims. The event, set to take place in a rooftop lounge in Midtown, will have increased security in light of the circumstances. “We put in an email to the venue requesting they be even more on the alert,” he said.

“Two weeks ago I was in Tel Aviv for the Pride Parade there — that was shortly before the Sarona attack,” he added. “It just never occurred to me that something like this could happen here in America, in our own backyard.”

Among national Jewish organizations, the outcry against the attack has been unhesitating.

“Although details are still emerging, an attack on a prominent Orlando gay club, at the start of Pride Month, on a night that celebrated the Latino community, has all the markers of both an unconscionable hate crime and an act of terrorism on a scale we have not before witnessed in America,” said CEO of the Anti-Defamation League Jonathan Greenblatt in a statement. “This heinous attack on a nightclub serving the LGBTQ community is yet another reminder of the serious threat posed by the Islamic State terrorist group, which has inspired attacks against Jews in Belgium, journalists in France, civilians in San Bernardino and now LGBTQ men and women in America.”

Organizations from the religious right who have been quick to oppose gay marriage in the past, including the Rabbinical Council of America, the largest network of Orthodox rabbis, strongly condemned the attacks.

“We categorically condemn the hatred and violence perpetrated against the patrons of the Pulse nightclub,” said RCA Vice President Rabbi Elazar Muskin in a statement. “No individual or group should be singled out in such a nefarious way. Our deepest condolences are extended to all the bereaved families, their friends and community, in this time of pain. Our thoughts and prayers for a speedy and full recovery are with all the wounded.”

The New York Board of Rabbis (NYBR) put out a similar statement, advocating for stronger gun control laws and encouraging the community not to “close our eyes to the insidious Islamic extremism, which targets the innocent regardless of faith.”

“We who fought against apartheid, dividing people according to race, cannot stand idly and permit it now to once again separate people because of personal orientation. Each person is created in the sacred image of God and belongs to the same human family entitled to the same dignity,” wrote Rabbi Gideon Shloush, president of the NYBR.

Littman, who plans to march in the June 26 Gay Pride Parade in New York City, said the attack haslefthimwroughtwithconflictingemotions.(New York City officials predicted Tuesday that this year’s Pride Parade will be the largest ever in the wake of the Orlando massacre.)

“No one expects to celebrate Pride through tragedy, but sometimes that’s how it has to happen,” he said. He reflected on the past two New York City Pride parades — two years ago, the parade took place after New York State voted to legalize gay marriage, while last year’s parade took place directly after the Supreme Court struck down the Defense of Marriage Act (DOMA).

“Both those times, we celebrated in triumph. This time, we’ll celebrate in sorrow,” said Littman. “But we’re still celebrating. And it might be the strongest celebration yet.”