Keshet, an organization that works for the full inclusion of lesbian, gay, bisexual and transgender Jews in Jewish life, has issued its first three “Jewish LGBT Change Makers” posters through its Hineini Education Project. When I took a look at them online, I was immediately reminded of the Jewish Women’s Archive’s “History Makers” (formerly “Women of Valor”) posters. 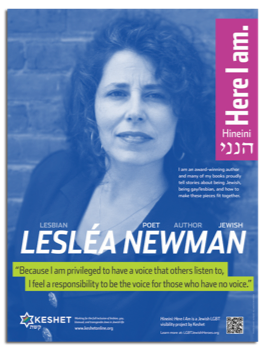 The similarity is both good and bad. It’s a good thing because I have always loved the JWA posters. They began being published when I was early in my teaching career, and were a great educational resource. “What an attractive and attention-grabbing way to introduce students to historical figures like Glikl of Hameln, Rebecca Gratz, Molly Picon and Emma Lazarus,” I thought.

Indeed, some people agreed with me. I have seen the posters hanging, laminated or framed, in a number of Jewish community and educational institutions. But for the most part, when I have seen them, they were not so well taken care of. And therein lies the bad thing.

It turned out I thought correctly about their being attractive, but not about their being attention-grabbing. As I moved from school to synagogue to museum during my 15 years as a Jewish educator in New York starting in 1990, I discovered many a “History Makers” poster rolled up and yellowing in a cabinet or drawer. When I began working as director of education at a large synagogue, I found several pinned up on bulletin boards. They were faded and frayed from having been used as class decorations for years – with the operative word here being “decorations.” None of the teachers in whose rooms the posters hung could recall having ever really using them in their teaching.

The women’s posters were underutilized not because of a lack of curricular resources to go with them. Rather, it was due to a lack of interest among educators for intentionally curricularizing Jewish women’s history. With so much to teach in so little time, Jewish women history makers were literally and figuratively left in the closet.

This is not a commentary on the graphic design of the posters, but instead on the will of Jewish educators to make effective use of them. I would hate for the same fate to meet these new Keshet posters honoring LGBT change makers – the first three being politician Harvey Milk, transgender author, playwright, performance artist and gender theorist Kate Bornstein, and Leslea Newman, known best as author of the groundbreaking “Heather Has Two Mommies.”

There is also the question of whether in today’s interactive multimedia world, an encounter with a poster is immediate and impactful enough for young people. In the age of YouTube and other forms of social media, one wonders whether effort would be better spent in creating videos rather than static posters to reach the intended audience.

There is no doubt that the intended message would reach exponentially more people (including those not in formal or informal Jewish educational settings) were it disseminated by the Internet rather than by being tacked up on a corkboard.

In my experience as an educator and mother, I have found that the most effective role models for children and teens are real, live people they have the opportunity to meet and know. But Milk is no longer alive and Bornstein and Newman can’t possibly make the acquaintance of every young Jew in America. Kids nowadays have their eyes glued to their laptops.

So maybe it’s time for them to be introduced to Jewish heroes — be they women, LGBT leaders, or anyone else — on the screen instead of the wall.