FOR GAY JEWISH sin­gles putting ‘finding someone special” on their list of New Year’s resolutions, Keshet’s annual Quick Dates event was the place to be Dec. 25. More than 60 participants gath­ ered at Temple Beth Zion in Brookline for an evening of fun. food and one of the single scene’s modem phenomenona: speed dat­ing.

Each participant was paired off with eight dates. with potential compatibility determined by ques­tionnaires filled out when participants pre-registered. Each person had eight minutes with each po­tential match, and at the end of each session participants deter­mined whether or not they wanted to see the person again, circl ing “Y” for yes or “N” for no.

Whether any of the recent Quick Dates participants will find true Jove is yet to be determined. but there’s no question that Quick Dates is  a great  match  for Keshet – it happens to be the group’s biggest annual fundraising event. 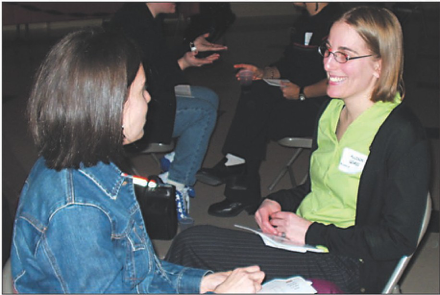 “There are many opportunities for straight Jewish singles to meet, but this is the only event of its kind all year for Jewish GLBT singles in Boston, so it fills a real need,” said Keshet Director Jdit Klein.

For Meir Sherer, chair of the Keshet board of directors , Quick Dates is much more than an antic­ipated social event.

“An event like this has every­ thing to do with Jewish continu­ity,” he said. ” It gives GLBT Jews an opportunity to meet, and maybe begin relationships with other Jews.”

IN JUST A FEW short years, Keshet has gone from a start-up organization into a recognized name in the Greater Boston Jewish community.

Along with social, cultural and educational events throughout the year, it offers programs aimed at GLBT youth, support groups for transgender and Orthodox Jews, and assistance to Jewish organiza­tions and synagogues seeking to become fully inclusive and welcoming of GLBT Jews.

“There are people who try to use the Bible against us, but as long as the Boston Jewish community says ‘No, we’re not participating in that, we are going to be inclusive,’ then that means so much to our GLBT community.”

With Massachusetts now the only state in America to legalize same-sex marriage, Keshet has played a major role in educating and mobilizing the Jewish com­munity to support equal marriage rights for same-sex couples.

That meant a great deal to Keshet member Heidi Holland. At the Quick Dates event. she played the role of ” Yenta,” the scarf-clad mistress of ceremonies, who en­ couraged everyone to have fun while looking for their soul mates. Last October, she walked down the aisle with her own soul mate, Ivy Brackup.

“There are people who try to use the Bible against us, but as long as the Boston Jewish com­munity says ‘No, we’ re not participating in that, we are going to be inclusive,’ then that means so much to our GLBT community,” she said. “Organizations like JCRC and CJP have stood there with us and supported us on the marriage issue, and we are grate­ ful to have that support.”