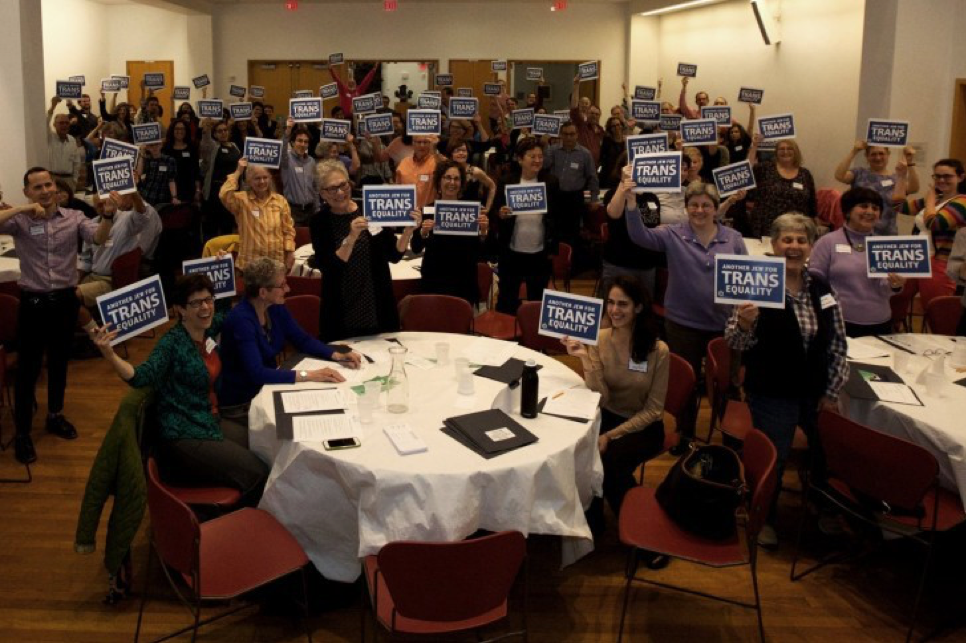 This November, Massachusetts voters will be asked whether to repeal the state’s 2016 transgender anti-discrimination law. Enacted in July 2016 and signed by Gov. Charlie Baker, the law listed gender identity as one of the factors against which people cannot be discriminated in a public space. Voting on the law coincides with the Massachusetts gubernatorial race, essentially making it a statewide referendum on transgender rights.

As Politico asked: “Is Massachusetts the next transgender rights battleground?”

That was the underlying question last week at “Defending Transgender Equality: A Jewish Community Call to Action”—a Keshet town hall that took place at Hebrew College. The evening was sponsored by Jewish organizations that have come together with major unions and employers, the Greater Boston Chamber of Commerce and the Red Sox to form a non-profit coalition called “Freedom for All Massachusetts.” The Jewish organizations in the coalition include Hebrew College, Jewish CommunityRelations Council of Greater Boston, Jewish Alliance for Law and Social Action, Massachusetts Board of Rabbis, Religious Action Center of ReformJudaism and the Anti-Defamation League, which chairs the group.

The evening was emceed by Rabbi Becky Silverstein, a transgender activist who provides pastoral support for Boston’s Teen Beit Midrash and serves as rabbi-in- residence for Keshet Shabbatons. Silverstein, who uses he and him pronouns, spoke to JewishBoston prior to the town hall about the ballot initiative and his role in defeating it. “The bill,” he said, “is at once disheartening and predictable. The fight for public accommodations in Massachusetts required lots of time and effort, and at the time it felt like a big win in the queer community.”

For Silverstein and other people, some of whom were in the town hall’s program, sharing their stories has enabled them to “leverage [their] personal vulnerability for the protection of [themselves] and others.” He continued: “We create a deep bench of allies and friends in whose presence you don’t have to explain anything. You can just go in the world and be.”

Silverstein’s transgender journey began his first year of college when he came out as a lesbian. He had always wanted to be a rabbi, and in his first year of rabbinical school he came out as transgender. “When I heard the term ‘genderqueer’ for the first time—that is, someone out of the gender binary—the term fit me,” he said. “What followed was a six-year exploration of my gender identity.”

Silverstein said he kept his given name, Becky, because “it has people interact with me as a non-binary gender and it forces people to consider all the ways in which gender occurs. Most important, it’s what feels right for me.”

In his welcoming remarks to the town hall audience, many of whom were from area synagogues, Silverstein reiterated the need to come together to share personal stories: “We need to create space for stories, talking amongst our synagogue communities and bringing our strengths together to create a public domain that allows us to show up as who we are.”

Among those who told their stories during the evening were two transgender high school students and a transgender activist and poet. Calvin Mitchell, a junior at Belmont High School and a committed member of his temple youth group, said the November ballot question “has the power to make the world a more dangerous place for a trans person to live.” He noted that as a transgender person in America, “[I am] constantly aware of the dangers for me and people like me. Politics right now is a question of whether we should be allowed the right to exist in a public space. It is whether we have the right to use a bathroom, sit in a public park and use the hospital.”

Genderqueer high school senior Avery Kiihne said: “The ballot scares me for what it could take away from my community and the precedent it sets. The Jewish community must come together with the LGBT community to defeat this ballot initiative.”

Activist and poet Laurie Wolf read her poem, which plaintively said: “Go and vote on my life,

This is what you ask to remove from public spaces.

You vote to never hear me or see me again.”

Wolf also cited the biblical passages in which the Israelites built booths during their journey to freedom. “We must keep that feeling of freedom by building booths again,” she said. “In November there will be booths. My freedom depends on us dwelling and in occupying those booths.”

Taj Smith, the faith organizing director for Freedom for Massachusetts, reiterated that “one of the most effective things in a campaign for transgender rights is people’s stories. Get to know trans people and their trans journey, because ultimately people connect with other people.”

Each of the speakers noted that connection happens by literally knocking on doors to campaign against the ballot initiative. Committing to uphold transgender rights can take the form of participating in a phone bank or signing Keshet’s pledge to vote “Yes.”

“This campaign requires us to share something that might have been kept behind closed doors,” Silverstein emphasized. “It requires us to open those doors, and for me it requires a different level of vulnerability. It asks me to share parts of my story with the Jewish community.”

Judy Bolton-Fasman is the culture reporter for JewishBoston.com. She has written about arts and culture for over two decades. Her essays and articles have appeared in The New York Times, The Boston Globe, The Forward, Tablet Magazine, The Jerusalem Report, Cognoscenti and other venues. Email her at [email protected]