The group that gathered at Jamaica Plain’s Jackson Playground on June 13 was small, but proud.

Keshet, a social organization for GLBT Jewish people, held a post-Pride picnic where attendees dined on kosher goodies, chit- chatted, and sang the praises of the organization that brought them together.

“[It] fills a gap for me,” David Friendler said. “It really is an interesting group of people I find camaraderie and fellowship here, and that’s what it’s all about.”

The healing and support Keshet offers to those dealing with the painful process of coming out, said Friedler, is of utmost importance. “The Jewish community and liturgy is about healing and setting the world right and healing the world,” he said. The group, he believes, is an outgrowth of that tradition.

A bisexual Orthodox Jewish man who asked that his name not be described Keshet, which is the Hebrew word for rainbow,  this way: “Support, for one thing; camaraderie, people [who are] struggling, trying to work out their sexuality to feel comfortable with it, people who are really, really scared about being punished or found out.”

Idit Klein, who began as a volunteer with the group in 1998  and became its paid director in 2001 has labored to expand the group and make it as inclusive as possible. “From the beginning of when I started working for Keshet, I was really clear that I wanted Keshet not to be a group that was T in name only [but] that was really inclusive in all the ways,” Klein said. “And slowly, over the last couple of years the number of trans folks coming to meetings and getting involved as leaders in Keshet has increased. We now have 9 members of our board; two of them are trans and there are a few other trans people who are similarly in leadership. So that’s something I’m really proud of.” 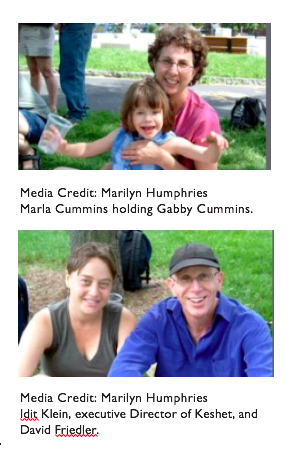 Board member Mycroft Holmes, who is also a member of a working group on transgender issues, is one such leader. Much of his work with Keshet involves outreach to the mainstream Jewish community. Mycroft has conducted a Trans 101 workshop for the board of directors and works one-on-one with members who lack experience with the transgender community.

Keshet’s outreach efforts, said Klein, have succeeded in part because of interest within the mainstream Jewish community.

“It’s rather extraordinary that there is so much interest among Jewish organizations and synagogues in learning how to become truly GLBT welcoming,” Klein said. “Really, more organizations have come to us than we have been able to respond to – which isn’t to say that there aren’t a lot of doors that are closed that would be very hard to get through – but because there really is a significant percentage of the Jewish community that wants to do the right thing.”