Keshet Is In Demand

Back in 2005 Keshet was a small Jamaica Plain-based organization focused on advocating for LGBT inclusion within the Jewish community in the Boston area; its executive director, Idit Klein, was the organization’s lone full time employee. That year Keshet, working with director Irena Fayngold, released a documentary film, Hineini, chronicling the experience of a girl coming out as a lesbian at a Jewish school in Waltham and trying to organize a gay/straight alliance. The goal of the film was to transform the conversation about LGBT people within Jewish schools and synagogues. But Klein said the film had an unintended consequence:

Keshet’s transformation from a small locally focused group to a national advocacy and education organization with eight current staff members and more expansion on the horizon. Klein chalks up the growth to the demand for resources to talk about LGBT issues in a way that resonates with Jewish culture and traditions. She first got an inkling of the impact the film wouldhave on Keshet while working with Fayngold on Hineini, when they began getting calls from rabbis and teachers at Jewish schools asking them to send along copies of the film. Word about the project spread long before it premiered in 2005.

“I would laugh and say, we’ve got 100 hours of unedited interviews, we don’t have a film. And often the rabbi would say, we don’t care, can you send us excerpts from an interview? Because there’s nothing like this,” said Klein.

Much to Fayngold’s consternation Klein sent out rough excerpts of the of the film during the various stages of production up through its premiere at the Boston Jewish Film Festival at the Museum of Fine Arts. Demand for the film only grew after its official release; it has screened in venues across the country and around the world, including at festivals in London, Paris, Madrid and Copenhagen last year. With calls coming from synagogues and Jewish schools around the country asking to screen the film, Keshet realized it had the chance to expand its mission outside of Boston.

“Suddenly we had a national product on our hands and needed to decide what we wanted to do with that,” said Klein. 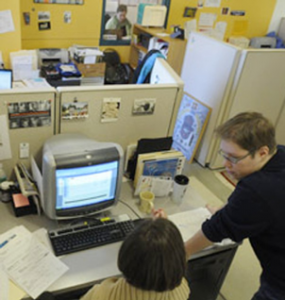 After the release of the film Hineini, Keshet rapidly expanded from a small, Boston- focused group with only one full-time staffer to a national organization with eight employees. Photo: Melissa Ostrow

To that end Keshet – the Hebrew word for rainbow – launched as a national organization last fall and focused on three initiatives. The organization developed a curriculum guide for Hineini, allowing schools to use the film as a vehicle for teaching about LGBT inclusion in Jewish communities. Keshet expanded its Boston- based Jewish safe schools program to do work in schools and communities nationwide. Klein said Keshet is also using its expertise to help other LGBT Jewish organizations around the country expand their capacity.

Keshet has greatly expanded its fundraising efforts to ensure that it can meet the increased demand for its services. Last month Keshet inaugurated what Klein expects to become an annual fundraiser, the Keshet Cabaret, to great success. The organization set a modest goal to raise $10,000 from the event. But the 200 people who turned out for the event, held at the Jorge Hernandez Cultural Center in Boston’s South End, brought in a little over $30,000.

“Needless to say we’re very happy to bring in more than that,” said Klein. Keshet is also taking steps to reach out to more synagogues and schools in the Conservative Judaism movement, responding to a decision by the movement’s highest legal body in 2006 to permit individual congregations to decide whether to allow same-sex marriages and the ordination of openly gay rabbis. To that end, Keshet has partnered with New York Rabbi Steve Greenberg, the first public openly gay Orthodox rabbi, to do outreach in Conservative congregations and other congregations where conversations about LGBT inclusion have proven difficult. To date the majority of Keshet’s outreach has either been to Reform and Reconstructionist congregations, whose parent movements have long welcomed LGBT members, or to pluralistic Jewish schools.

“What I’m going to add is, for those communities whose grappling with the tradition has been challenging, to provide a more extensive and thoughtful way to guide into the materials that seem to prohibit and perhaps even demonize same-sex relations and to perhaps open up a way to read them that’s different,” said Greenberg, who will function as Keshet’s rabbi- in-residence.

Greenberg said that starting this spring he will accompany Keshet on outreach events to some schools and congregations. He will also continue to work independently, holding trainings for groups of Conservative rabbis on LGBT inclusion and empowering them to go back and begin dialogue in their own communities.

“It also multiplies; opens up the chance that people for whom this is a harder issue would come, because often we end up preaching to the choir, but what a program like this does is mobilize rabbis to confront their congregations on these issues and perhaps bring out people who are more conflicted on these issues,” said Greenberg.

Klein said there is no shortage of demand for Keshet’s educational services. Before Hineini she said Keshet did about five to six safe schools trainings each year; after the film was released that number jumped to between 25 and 50. Many of those trainings were done in conjunction with Hineini screenings. In its new incarnation as a national organization Klein said Keshet will be leading two training-the-trainers workshops, the first in Atlanta in May and the second in Cleveland in July, to train participants to facilitate Jewish safe schools workshops in their own communities. Each participant must have an affiliation with a Jewish organization to participate; all participants commit to doing three trainings per year.

Andrea Jacobs, Keshet’s director of education, said that safe schools work in Jewish schools focuses on the issues that confront any other schools, particularly how to respond to bullying and the use of anti-gay slurs. But in some schools, particularly in pluralistic schools that welcome students from different movements within Judaism, Jacobs said there are strong differences of opinion about whether being openly gay or lesbian conflicts with Jewish identity.

“They’ve come up more in terms of a student in the class expressing, ’I really don’t agree with it, and this is what the Torah says, the Torah says you shouldn’t engage in these acts.’ … [That student may come] up against students in that same group who identify as gay or have close friends who are gay, and what they say is, ’So you’re telling me I can’t be a good Jew.’ And there’s no easy way to resolve that,” said Jacobs. In those and other difficult situations Jacobs asks students to think about the values inherent in a pluralistic community and the need to make room for people with different understandings of Judaism.

Even in communities that embrace their LGBT members there are more subtle issues that Keshet has worked to address. Judy Avnery, director of the K-5 day school program at Temple Beth Elohim of Wellesley, a Reform congregation, said that for the past two years Keshet has worked with the school to help ensure that all members of the community feel welcome. The school includes students with gay or lesbian parents, and Avnery said working with Keshet she realized that some of the exercises in the younger grades that revolve around family, such as teaching children how to say “mother” and “father” in Hebrew, unintentionally sent the message that Jewish families have one mom and one dad. In that instance Avnery said they changed the lesson to expand the discussion of family to make clear that some families have two moms or two dads. Avnery said working with Keshet to include gay and lesbian families in the temple community also prompted them to look more closely at how they include other families that do not fit the traditional mold, such as families with step-parents or families where one parent has died.

“What’s wonderful about Keshet is although it’s about gay and lesbian [issues] it’s not just about that. It’s also about inclusiveness,” said Avnery.

In communities where there is more of a struggle discussing LGBT issues Greenberg said the challenge is making the case that inclusion of LGBT people and adherence to Jewish law are not mutually exclusive paths. He said he argues that interpretation of Jewish texts must change with the times by necessity, pointing to sections of Jewish law that describe deaf people as uneducable, which have largely been disregarded as experience showed that deaf people learn just as well as hearing people.

“Given that, it’s not impossible to read a text and see it in circumstances and apply it in new ways,” said Greenberg. “And I think that’s one of the ways people challenge the religious tradition to respond, to say, this is not new.”

Ethan Jacobs can be reached at [email protected]