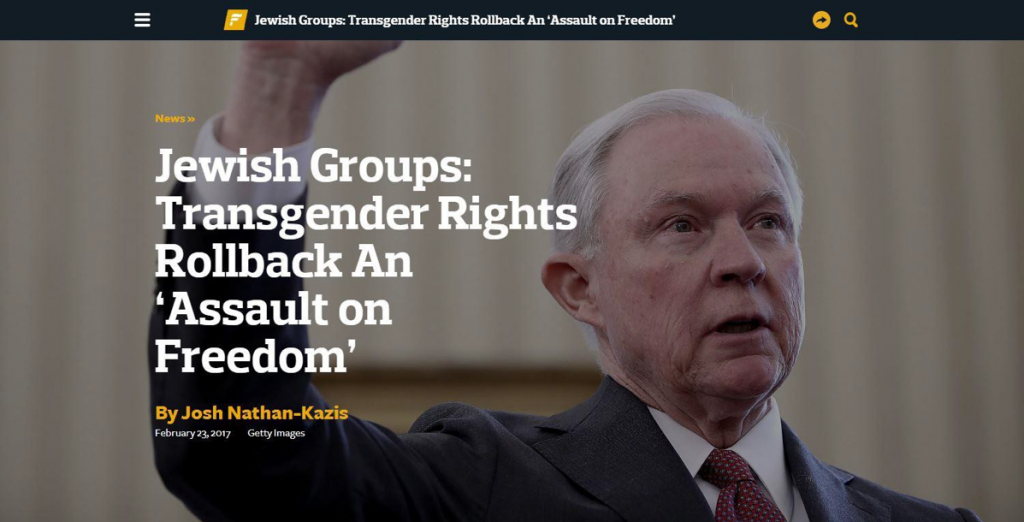 Jewish organizations are railing against the Trump administration’s removal of Obama-era protections for transgender youth.

In a string of angry statements, Jewish groups condemned the measure, which will lift a requirement that public schools allow transgender students to use bathrooms appropriate to their gender identity.

The Jewish activist group Bend the Arc called it a “assault on freedom and humandignity.” The National Council of Jewish Women said that it was “disgusted by this betrayal.”

“We lament this serious step backward,” said the leaders of Reform Judaism in a joint statement.

Transgender Jewish teenagers, disconcerted by the announcement, have been reaching out in recent hours to the Jewish LGBT equality group Keshet. “It sends a really clear message that trans lives are not being valued and protected,” Catherine Bell, the group’s senior director for programming and leadership, told the Forward.

The Trump administration announced the policy shift in a letter issued jointly by the Departments of Justice and Education, which explained that federal anti-discrimination laws do not require that transgender students be permitted to use bathrooms consistent with their gender identities.

In doing so, the Trump administration reversed a controversial guidance document issued last May under former President Obama. Implementation of that guidance had been on hold since August, pending a federal court order.

The year-old Obama-era provision rested on the notion that transgender students are protected against discrimination under Title IX of the Civil Rights Act, which bars discrimination on the basis of sex. Now, that interpretation is under threat.

Nancy Kaufman, head of the National Council of Jewish Women, said in a statement that the Trump administration’s policy letter does not entirely remove Title IX protections for transgender students, which have been upheld in some courts. Still, she said, “it does send a clear message to these students that their safety does not matter to this administration.”

Right-leaning Jewish groups were largely quiet on the letter. A spokesman for Agudath Israel of America, the leading ultra-Orthodox advocacy group, told the Forward it had no position on the issue.

“Transgender individuals deserve to live in dignity, without fear of bullying or discrimination,” wrote Schneiderman, who has emerged as a leading critic of the Trump administration. “I will do whatever it takes to protect transgender and all LGBTQ New Yorkers, no matter what happens in Washington.”

The New York Times reported that the Secretary of Education, Betsy DeVos, initially opposed the new guidelines, but bent under pressure from Attorney General Jeff Sessions and President Trump.