Val Weisler shares her story about her experience leading up to Keshet’s LGBTQ Teen and Ally Shabbaton as part of Keshet’s celebration of LGBTQ Pride Month. Keshet <http://www.keshetonline.org/> works for the full inclusion of lesbian, gay, bisexual and transgender Jews in Jewish life.

At the young age of 5, I started what would be a decade of denial. I should’ve known I was gay when I was in preschool, and I asked my mom if there was a country where I could marry my best friend, Rachel.

I should’ve known I was gay when I put it on my calendar every Monday for five years to “Pick A New Crush.” Every other girl in my class had a crush on a boy, so I would take a look around a classroom and pick the boy that wasn’t picking his nose. I didn’t have high standards. 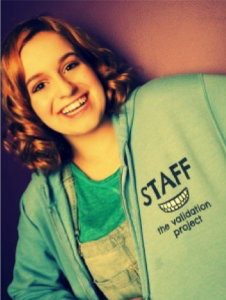 I came out for the first time to one of my closest friends at a convention for my youth group, United Synagogue Youth (USY). She immediately accepted me but I was still slapping myself in the face when I saw a cute girl and constantly praying to G-d to please, Hashem, help me be “normal.”

I came out to a group of peers on April 4th, 2014 at the Keshet/Hazon LGBTQ & Ally Teen Shabbaton. I drove up from my New York suburb to Middle Of Nowhere, Connecticut (Falls Village) with my best friend from USY to the Isabella Freedman Center.

With shaking hands, I grabbed my suitcase and walked into a room with around 50 Jewish teens. Some draped rainbow flags over their shoulders and others chatted about the best challah recipe for Shabbat dinner. From learning about the hardships that other LGBT Jewish teens have endured to doing services on a mountain top, I felt the largest connection to Judaism I have ever experienced and my hatred for myself transformed into an overwhelming sense of pride.

April 4th to 6th is the weekend that changed my life for the better.I came out publicly to the world through a video of me being honored at the Gay Lesbian Straight Education Network Awards and am now one of the first “out” people in my grade at school.

Walking into my suburban public school the next day was a nightmare. I feared being taunted, judged, losing the friends I had just finally made.But it was exactly the opposite. My day started with a phone call from another Keshet Teen LGBTQ Shabbaton attendee, congratulating me and wishing me luck. I only met that teen a few months ago, but they are now not only a friend, but family.

I got messages of support from people in school and people in my synagogue, people who live next door to me, and people who practice Judaism in Africa. Especially this month, I’m so incredibly thankful for the Jewish community for teaching me that different is not just “ok,” but incredible.

We Jews are all over the place and the sense of family—whether the conversation is about coming out or what horseradish brand is on your seder plate—is so immense and welcoming. No matter what, I know that I am branded with the imprint of my grandmother’s matzo ball recipe and that my rainbow flag is proudly stained with grape juice from my Shabbat dinner.