‘Hineini,’ film on coming out in a Jewish high school sparks discussion

About 50 people attended a screening of “Hineini: Coming Out in a Jewish High School” and panel discussion last week at the YJCC in Washington Township.

The film follows Shulamit Izen’s quest to gain acceptance at her Boston-area school, not only for herself as a lesbian, but also for other LGBT students there.

This was the second of three screenings and discussions planned by the Jewish Community Relations Council and Synagogue Leadership Initiative of UJA Federation of Northern New Jersey. The first was held in November at the Kaplen JCC in Tenafly and the third will be held at the YM-YWHA of North Jersey, in Wayne, next month. 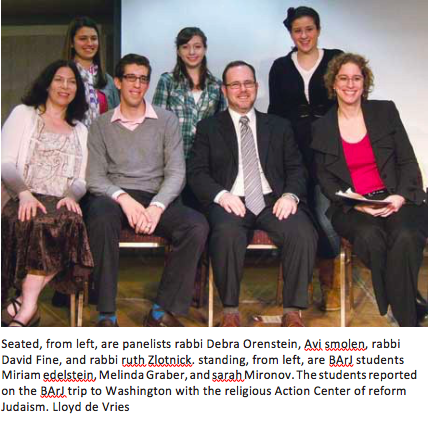 Rabbi Ruth Zlotnick of Temple Beth Or in Washington Township moderated the panel, whose members were Rabbis Debra Orenstein of Cong. B’nai Israel in Emerson and David J. Fine of Temple Israel and Jewish Community Center in Ridgewood, both Conservative. Also on the panel was Avi Smolen, who married his partner, Justin Rosen, in October in a civil ceremony in Connecticut and a Jewish ceremony in Syosset, N.Y.

In the audience were students of the Bergen Academy of Reform Judaism, which normally meets at Temple Beth Or on Wednesday nights. The screening was the BARJ session for the week.

Rabbi Neal Borovitz, chair of the JCRC and religious leader of Temple Avodat Shalom in River Edge, told The Jewish Standard that “one of the things that JCRC wants is to keep the issues of civility and acceptance in front of our Northern New Jersey community.”

After the screening, Orenstein said, “It shouldn’t be such an enormous challenge to see the humanity and divinity in another person.

“If you can’t feel at home in your spiritual home, something is very, very wrong. We have to understand the full range of diversity,” she said.

Smolen said there are differences between a community that comes together of free will—such as in a civic organization— and a school where students are thrown together. It’s harder to walk away from the latter than from a voluntary group that isn’t accepting of you.

The announcement in The Standard of Smolen’s gay marriage touched off a storm of controversy.

“That to me was my standing up for my identity,” Smolen said. “That community then had to have a discussion about” whether to accept homosexuals.

Smolen, who is a development and communications associate in the New York City office of Keren Or, a center in Jerusalem for blind and multi-disabled children and young adults, said he did not submit the wedding announcement to be hurtful, but to celebrate a lifecycle event.

To “come out,” “you have to feel comfortable with who you are,” Smolen said, in response to a question from Borovitz.

Smolen, who is Conservative, said he has Orthodox friends who had a much tougher time dealing with their homosexuality, because there are no Orthodox role models and no one in that community to talk to about the issue.

An audience member said that Izen had the courage to declare her sexual identity because her parents accepted her as she was. Many young Jewish gays and lesbians don’t have that support, and struggle, the woman added.

“The challenge is to imagine oneself as the other,” said Fine.

He said what Shulamit Izen experienced at her high school was similar to his experience as an observant Jew attending a public high school.

Just as Izen thought she was alone until one day she spotted a rainbow keychain on a teacher’s desk, indicating that the teacher might be gay, Fine one day watched as a teacher monitoring study hall put on a beret, opened a large book and read from it, then closed it and removed the beret. When Fine got a look at the book, he discovered it was a section of Talmud.

Fine added that he had engaged in a vigorous debate in his seminary about accepting homosexuals in the Jewish community. He told of a woman friend who cried when she read a paper he had written on the subject and revealed that she was a lesbian. That showed him, he said, that “these are real people,” not just abstractions.

Fine later served on a Conservative movement committee that drafted rules on gays and lesbians serving as rabbis. He wrote a dissenting paper that argued for greater inclusiveness than the committee had recommended.

Izen entered her high school as a freshman in the fall of 2000. An audience member who teaches at both the Bergen County High School of Jewish Studies and BARJ said that students at both schools are more tolerant than those at Izen’s school.

Zlotnick pointed out that Izen’s school in suburban Boston has been transformed not by the headmaster, not by the teachers, but by a student.

The evening closed with a report by three BARJ students who took a trip to Washington with the Religious Action Center of the Union of Reform Judaism. Miriam Edelstein and Sarah Mironov of River Dell High School and Melinda Graber of Tenafly High School delivered a speech they had made to members of the U.S. Senate in support of anti-bullying legislation protecting LGBT students.